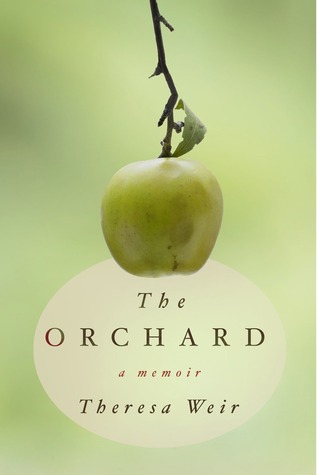 When most of us see brightly colored apples on the grocery shelves and at a farmer’s market stands, we think of this hallmark symbol of autumn, freshly baked pies, and picturesque orchards. But for Theresa Weir, she sees apples as a symbol of her long-ago dark days as a young bride on a dangerous apple orchard. Theresa’s story about her experience with one of America’s favorite fruits is the premise of her first memoir, The Orchard.

Theresa is a bestselling author of dozens of novels that have spanned the genres of suspense, mystery, thriller, romantic suspense, and paranormal. She takes her first nonfiction approach to writing with The Orchard, which tells the story of a street-smart city girl who must adapt to a new life on an apple farm after she falls in love with Adrian Curtis, the golden boy of a prominent local family whose lives and orchards seem to be cursed. Married after only three months, young Theresa finds life with Adrian on the farm far more difficult and dangerous than she expected. Rejected by her husband’s family as an outsider, she slowly learns for herself about the isolated world of farming, pesticides, environmental destruction, and death.

I had the pleasure of speaking with Theresa about The Orchard, as well as her approach to writing in general. The events in the memoir began in 1975. When asked why she waited quite some time before writing The Orchard, Theresa gave several reasons, including the desire to put enough time and space between the events in the book to her life today. However, she believes that she really needed time to grow and improve as a writer in order to tell this story.

Theresa compares The Orchard to a dark fairy tale in that it had all the elements of the classic stories – the magical land, the handsome price, the naïve bride, and the poison apple. Once she saw the story in that tone, Theresa said it was easier to determine the tone and write the memoir.

Without giving too much of the plot away, I will tell you The Orchard is certainly eye-opening when it comes to growing (and eating) fruit. And the biographic story of Theresa is one that I will never forget. Theresa admits that up until a few years ago, she could not bring herself to eat apples. And while farming has indeed changed since 1975 in that consumers are more aware of eating organically, she still feels there’s a long way to go in order for people to be truly educated about pesticides and orchard fruits.

“I hope people will come away [from The Orchard] with more of an awareness of pesticides and fruit,” Theresa said. “I wanted to write a personal story hoping that putting a face and name to the situation would have an impact on people.”

Since this was Theresa’s first non-fiction work after a series of fiction novels, I talked with her a bit about the differences in writing the two genres. She believes that fiction is easier for her to write. Mainly because with memoir writing, one has to determine which of the many events in one’s past can be written with actual plot points in mind. Theresa believes that with fiction, the writer can construct a plot in whatever way she determines. Yet with non-fiction, that is not always a luxury. Yet the plot needs to progress in order to create a page-turning experience for the reader.

While she believes it was harder to write non-fiction, Theresa is very aware that writing The Orchard helped tremendously in her fiction writing. “With first-person writing, I would write the scene as it happened, and then dig deeper into the situation and explore my emotions and the emotions of others,” Theresa said. “When I was writing fiction, I didn’t do that as much. So now I’ve learned more about exploring the emotion of characters through my own non-fiction.”