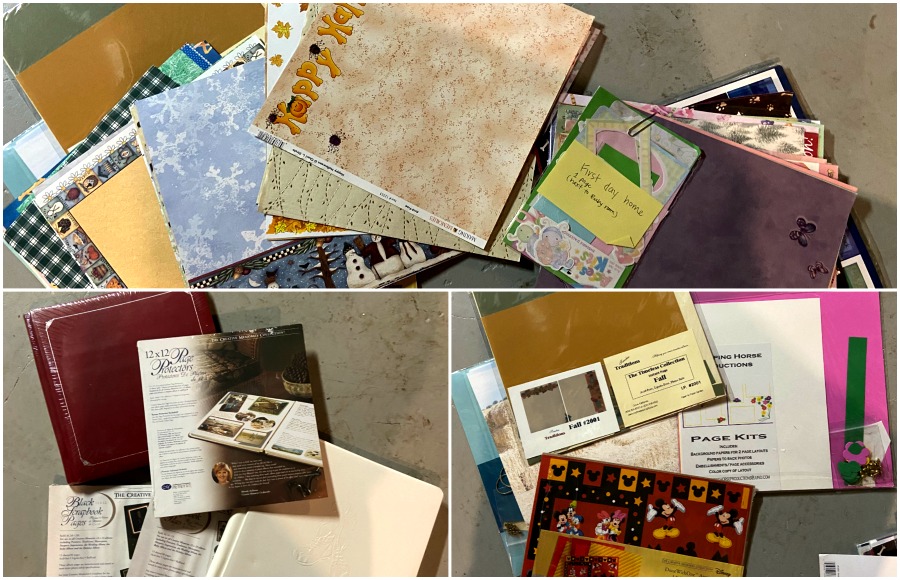 A Bittersweet Farewell to the Scrapbook Supplies

When I was in my 20s, I was REALLY into scrapbooking. This was back in the early 2000s, before the days of Facebook and Instagram, before Shutterfly photo books, and when we still printed actual photos and put them in albums. This may have even been before I owned a digital camera (I know, I’m really dating myself).

I’ve always loved photography and I’m the person who takes photos at every event. And when I was a kid, I was obsessed with collecting stickers. I don’t quite remember how my infatuation with scrapbooking began, but I think it started when I went to a Creative Memories party at a friend’s house. Creative Memories was the premiere and multi-level marketing company for all-things scrapbook. I got suckered into buying the starter pack, which sat in my house, unused, for quite some time.

Then one day, my friend, Monica, confessed that she started scrapbooking. She attended Friday night get-togethers at a local scrapbook shop. Basically, you’d bring all your supplies and then create pages for your book, and you could pay for and use the supplies at the store. Once I started attending those events and seeing the bountiful supply of stickers, letters and decorated themed papers that were at my disposal, I was hooked!

From that point on, scrapbooking became my life. I scraped every weekend, either with by myself, with Monica, or with my sister, Sari, who later got into the craze as well. I made several albums that featured my sisters, dogs, holidays, my wedding, honeymoon and travel, Disney … so many! Monica and I later became Creative Memories consultants and we sold product and hosted parties, mainly to get early access and a discount for everything we were already buying. I subscribed to scrapbook magazines and attended scrapbooking conventions (oh yes, there were conventions!). I bought SO MANY supplies … stickers, paper, albums, additional packets of pages, page protectors, page kits, pens … everything! I spent SO MUCH MONEY on scrapbooks and supplies that it literally filled multiple totes in my house.

And then one day, I stopped scrapbooking. It was not a conscious choice to stop. I think I just got busy with raising a small child and celebrating the actual milestones with her. I was working full time and starting my business. By the time Sophie was a toddler, Facebook was becoming the go-to digital scrapbook (back when the social media giant was about sharing photos and stories, not hate and shaming people).

I’ve written before that I don’t like to hold onto things, especially physical items. But I could not let go of the scrapbooking supplies. When I packed my house to move to Indiana four years ago, I told myself I should just donate the scrapbook stuff and not pay to move it across the country. But I just couldn’t; and on the moving truck it went. When I packed to move into my new house this spring, I still couldn’t let the stuff go, even knowing I would never scrapbook again.

I think there are several reasons why I could not let it go. The first was the feelings of guilt and shame I had that went with the supplies. As I said, I spent so much money on those items; money that contributed to our debt and credit cards. Every time I saw those tubs of things, all I saw was wasted money. I was ashamed of that. So I kept it, thinking that I need to hold onto the stuff to own the debt.

I’m a person who likes to finish what she starts. I feel compelled to cross tasks off lists. It took years before I allowed myself to stop reading book mid way through because I didn’t like it, or give up a television show after a few episodes. I realized I didn’t have to see everything through. I could – gasp – leave things undone. I had grandiose plans to create those scrapbooks; to make Sophie’s baby book and use all the pumpkin patch kits I bought to showcase those autumnal traditions we participated in. So if I let the supplies go, I was admitting that I would never finish what I started.

Those albums and part of my life were also tied to the early years of my marriage and some of the more carefree and happy times in my life, my 20s. Life changed and things didn’t end up being as happy as a scrapbook spread. That’s a hard thing to own up to. Additionally, I had grown apart from my friend Monica, who was my scrapbooking partner-in-crime.

A few weeks ago, I was in my new basement sorting boxes and the scrapbook supplies began staring me in the face. And I knew it was finally time to let them go. I photographed the supplies and posted to Facebook that I was getting rid of it all for free. One friend, a mom of three and a Girl Scout troupe leader, took a stack of the themed paper. Another friend who still scrapbooks on a regular basis with a group of ladies took the rest. So this week, I dropped off all the albums, page protectors, inserts and the remaining page kits to her.

It felt so good to remove those things from my house and my life. I didn’t realize how much power the physical release of items would have for me. I truly felt “lighter” as I drove away from the scrapbook stuff. … I did, however, keep some colored paper, stickers and letters because Sophie uses them for school projects. And I’ll do most anything to avoid a trip to the craft store.

And in a twist of fate (because I don’t believe in coincidences), the other day I randomly looked up my former friend, Monica, and realized she recently lost a family member. Without any expectation, I felt compelled to reach out to her and offer my condolences and say hello. She replied back and we’ve reconnected a bit this week; ironically, the week I let go of the scrapbook supplies.

I like to think that by physically releasing the hold those items had over me, I was able to make room for more mental and emotional growth and space. Giving that stuff away is not going to change who I was, or who I am. Those things don’t define me, just like the beautiful scrapbooks I made were not true depictions of my everyday life. They were just parts of my whole.