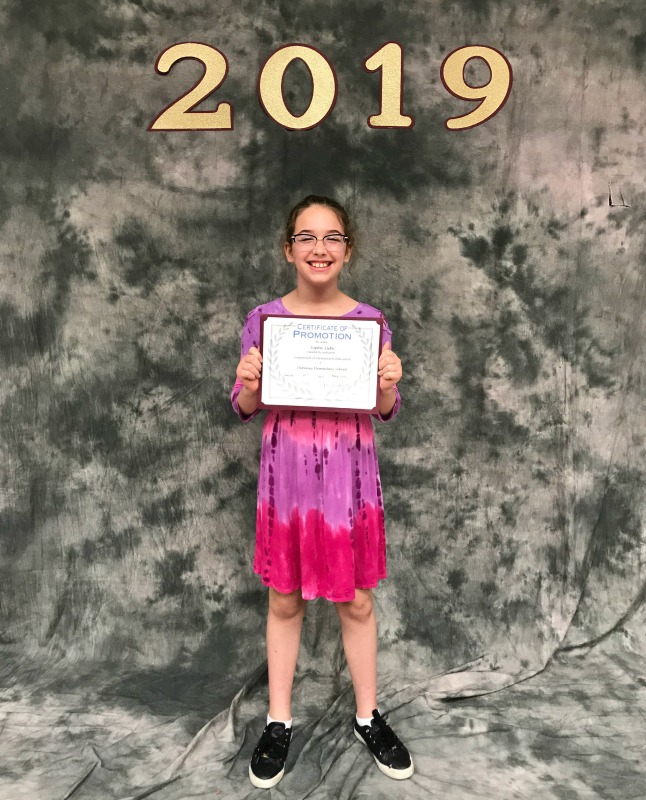 And in a Moment, a Volume Closes and a New Book Begins

Some days, it feels like just yesterday she started kindergarten. Or her first day of third grade, which was her first at a new school in Terre Haute. And other times, those moments feel like a lifetime ago. I’m not worried about her going to middle school. In fact, I’m excited for her and the opportunities she has in front of her, and I know she’ll be fine in a new school.

I think what gives me pause and some sadness about this milestone is thinking about all the years and time that’s gone by. I wonder constantly if I’ve done right by her in terms of being a good parent. Could I have been more empathetic toward her at times? Did I support her endeavors and give her the right encouragement? What about all the times I freaked out or made snap judgments toward her, and then later regretted my words and actions? Was I in such a hurry to get to tomorrow that I forgot to enjoy all the todays?

I guess, at some point, I just have to accept that I’ve done the very best I can. And hope she takes all the best parts of me and all the time that’s passed, and it helps make her the best possible person going forward.

Much like myself, I’ve seen the most growth and change in Sophie these last three years in Indiana. It’s not easy to leave behind the only life you’ve known for a brand new start, in a new part of the country. But she took that challenge and soared to new heights. Sophie is so much braver than I ever was at her age, and I couldn’t be more proud of her.

There are so many days when I wonder how I got the daughter I have. Sophie and I are so opposite, in so many ways. She’s an extrovert; I’m an introvert. I often joke that if I don’t know what piece of clothing to buy her, I should choose the one that I dislike the most. Because that will ultimately be the one she wants. She cares very much what others think of her; I care more about what I think of myself. I process everything internally and am very guarded about revealing too much of myself to others. Sophie is an open book and the definition of external expression. Growing up, I had a lot of fear of the unknown, which kept me from pursuing opportunities. Sophie has courage; and while she won’t go after every opportunity presented to her, she won’t let fear get in her way if it’s something she truly wants.

A friend once told me that, when it comes to parenting, we’re given the child we need. I think there’s something to that statement. Because as much as Sophie can frustrate me at times, I’ve learned so much from her. And I know she’s made me a better parent, and a better person.

“Then the child moved ten times round the seasons
Skated over ten clear frozen streams
Words like, when you’re older, must appease him
And promises of someday make his dreams
And the seasons they go round and round
And the painted ponies go up and down
We’re captive on the carousel of time
We can’t return we can only look behind
From where we came
And go round and round and round
In the circle game”