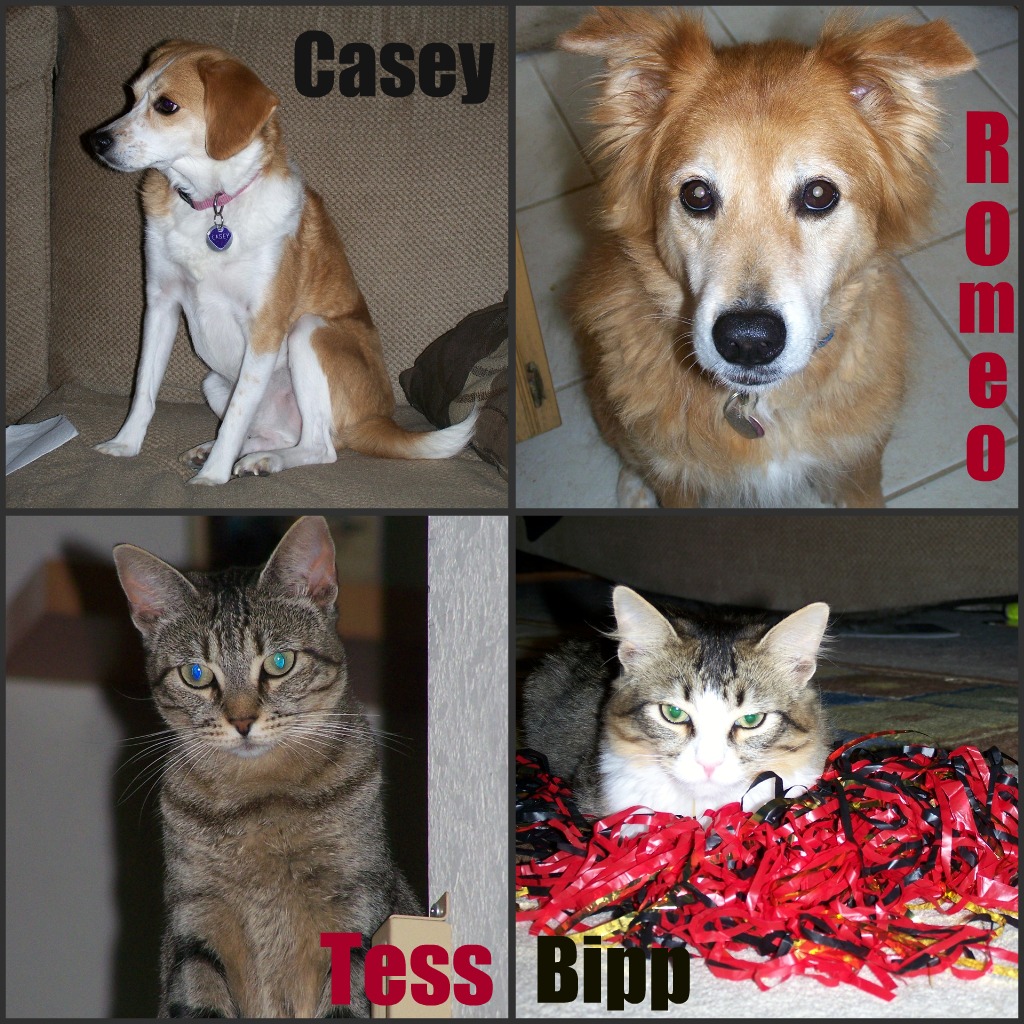 It’s become quite clear that Bryan and I are paying a mortgage on this house so that four animals can live in it. The number of furry creatures in this house now outnumbers the humans. Yes, we have been overrun by animals.

We added Casey the puppy to the mix when it was just Bryan and me. And we thought those days were tough! That time seems completely foreign now. A year later, we added Romeo to the mix. It got a little more active in the house, especially when the two canine companions would play together (coincidentally, always when Bryan and I sat down to quietly watch television). Enter Sophie one year later and we truly can’t remember having a calm and quiet house.

And then, the gluten for punishments that we are, we took kindly on the cat family and decided to adopt Tess and baby Bipp. Now, I’ll be the first to admit that cats are way easier than dogs. They clean themselves. There’s hardly any house-training. And they’re quiet, even when they play. So of course I assumed that we wouldn’t notice a difference by adding two cats to the house. Wrong!

There’s now so much more to deal with. For instance, is Tess outside or inside? If she’s outside, when is she coming back? Will she bring us a rat, bunny, lizard, or bird? (Yes, she’s brought all of those to us.) Bipp is so small that he’s always hiding in cabinets, cupboards, under Sophie’s bed, or jumping on the counter to try and find food. Every time we feed him food, we have to watch out for Casey who attempts to kick Bipp away and eat his delicacy. And because both Tess and Bipp are so quiet, we’re constantly worried we’ll step on them.

Luckily cats do not shed; so we don’t have more hair to worry about. (We’re already drowning in dog hair.) But now there’s keeping cat liter contained and coming home to the gift of lizards in the family room.

And let’s not even talk about the sleeping arrangements. There are nights when we’re ready to sleep, only to find all four creatures laying in different spot on the bed. Cesar Milan would cringe and an intervention is likely in order.

So suffice it to say, the inmates have taken over the asylum. The canines and felines rule the roost. This is their house. We just live in it.

And no, I wouldn’t trade any of them.