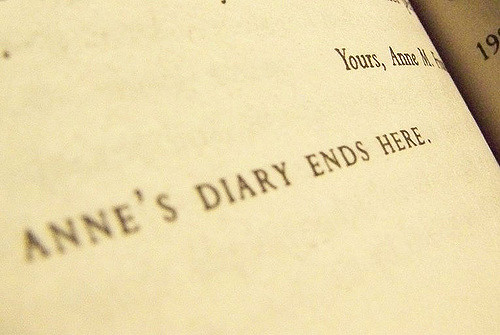 Anne Frank, the Holocaust, History and Heritage: An Evening Conversation With Sophie

Every day at school, Sophie picks out a book from the classroom library. Lately she’s been interested in the “Who Was” biography series for kids. She’s gone through Harry Houdini, Albert Einstein, Steve Jobs, Rosa Parks and several others. The other day she picked up the biography of Anne Frank.

“Mom, who was Anne Frank?” Sophie asked, later that evening.

Sophie is familiar with parts of history, including the two world wars. She knows that during that period — when her great grandparents were alive — the country of Germany was ruled by a cruel dictator that hated many groups of people. She knows that parts of the world treated her Jewish ancestors poorly. She knew about a man named Hitler who wanted Jews and other groups of people out of the country (thank you to the Who Was Albert Einstein? book for explaining that concept). But I’ve never before explained the Holocaust to Sophie.

I went on to tell her the story of Anne Frank. She was a young girl who lived in Holland during World War II. She kept a diary and liked to write. She was Jewish. Her family tried to escape being taken prisoner by the Nazis by hiding in an attic. A kind and brave Catholic Dutch woman helped Anne and her family survive for two years. The diary is Anne’s words about her life before and during the attic. Years after the war ended, Anne’s father, Otto, published her diary.

Of course Sophie asked the inevitable question: What happened to Anne?

I explained that her family was discovered in the attic. They were taken to a concentration camp where prisoners were taken, and she died in the camp. We both cried as I talked about her fate. Although Anne died of typhus, I did not talk about the manner in which so many others were killed in concentration camps. I did not mention gas chambers and ovens. She’s still too young to comprehend that (I still have a hard time comprehending that).

Choking back tears, Sophie said perhaps she shouldn’t read Who Was Anne Frank? because it sounded too sad. But I encouraged her to read it and learn about Anne’s story because it’s an important part of history – especially our history – and her story needs to be told. This is how people and circumstances are remembered, I said (and hopefully not happen again). And despite her capture and death, I explained that Anne was very much a brave soul and she believed in the good in the world.

I then pulled from the bookshelf my tattered old copy of Diary of a Young Girl by Anne Frank. My parents gave me my copy of this book when I was a few years older than Sophie. I gave the diary to Sophie who looked as if she was holding a treasure.

She had a million questions:

Is this her writing? Did she speak another language? If she spoke Dutch, how is this written in English? Is this what she looked like? How old was she when she wrote this? How many copies of her book were made? Where did her dad find the diary?

Sophie then asked about my intention in giving her the diary.

“Are you passing this book along to me?” she asked.

“And then I’ll pass it along to my daughter,” she said. “I hope when I have a daughter, she will want to be Jewish too.”

“It’s what you share with her that will help her decide what to believe and how she will want to live her life,” I said.

I then watched Sophie stare at the book and glide her hands slowly across the cover. Our conversation that evening about Anne Frank reminded me why we tell these stories, share books, and talk about the pieces of our heritage — no matter how painful they are.