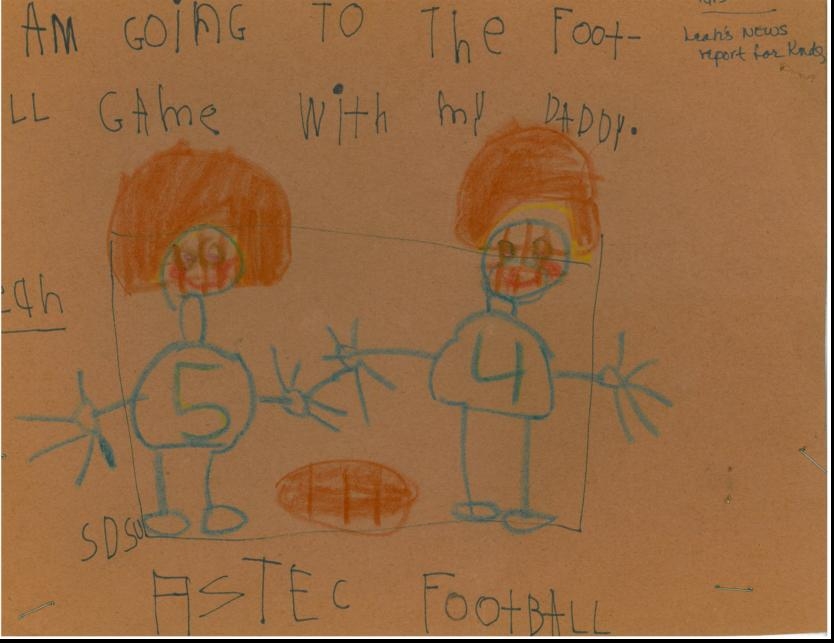 I am an Aztec for Life. What’s an Aztec?

The Aztec Warrior is the SDSU mascot. San Diego State University is where I work and, in one way or another, have spent a majority of my life. The campus celebrates its 113th year this month. To celebrate, the University is sponsoring a video contest in which people illustrate how they are an Aztec for Life.

I’ve given a lot of thought about the Aztec for Life concept and how SDSU has played such a big role in my life. Here is my story of being an Aztec for Life.

My family moved to San Diego in 1979 when my dad got a job as a dean at San Diego State University. I was 4-years-old. My earliest memory of SDSU is walking around the campus with my dad. Every time we had a guest or relative in town, my dad would take them on a tour of campus. Even at a young age, I could tell he was very proud of where he worked.

As I got a bit older, I was lucky enough to go work at my dad’s office every so often. I considered this to be a real treat. I would dress up in a nice outfit and offered my assistance to his staff. They gave me the very “important” job of separating the carbon-copy faculty transaction forms in three piles. Then after a few hours of work, my dad would take me to lunch at an eatery on campus. Square Pan Pizza was a favorite of ours. Sadly, it was replaced many years ago with Sbarros and is just not the same.

I so enjoyed those days of seeing what my dad did all day and spending time with his staff. In fact, many of those people have become very close family friends and have celebrated with my family all our milestones. They’ve attended my bridal shower, wedding, baby shower; and they’re on the holiday card list. My family was never very close to our blood relatives. These people – my SDSU family – are my extended family.

Another SDSU milestone was attending my first Aztec football game. My dad and I sat in the stands with a neighbor. I was 5-years-old. I went home and told my mom that it was a good thing that my newborn sister, Ellye, did not go to the game because there were peanut shells all over the ground. For my sharing the next week at school, I drew a picture of two Aztec football players and stapled the ticket stubs to the drawing. This was 1980. It may have been the last time the Aztecs actually won a football game.

My dad, sisters and I went to countless football games after that. We “moved up” in the world by sitting in the Academic Affairs sky box. It was so exciting. Ellye and I were in heaven. We never watched the games, mind you. But we sat up the stands, ate the “special” food, and giggled as we watched the crowds.

The summer before sixth grade, I attended the SDSU Leisure Connection summer camp for kids. It was two weeks of fun activities on the SDSU campus – swimming, science, art, and my favorite, clownology. (Is that really even a word?!) It felt exciting to be an Aztec at 10-years-old.

Fast-forward several years to my senior year of high school and college applications. Even when my family piled in the “family truckster” for the inevitable college tour, I always knew I would be an Aztec. I was thrilled to receive my admission letter in December 1992. My dad bought me my first SDSU sweatshirt, a black sweatshirt with big red SDSU letters. I still wear that sweatshirt today. And my admission letter is framed and sits on a shelf in my office.

Going off to college was magical for me. The day I moved into the dorms (or residence halls as they are now called), I knew I was home. I was never comfortable in high school. But college is where I found myself. I loved San Diego State. I loved the campus, the freedom, learning whatever I wanted, picking classes that actually interested me, and the connection I had to that school. Everything about SDSU symbolized opportunity and excitement.

I graduated with a bachelor’s degree in journalism and political science on a very hot May morning. It was a bittersweet moment. I was proud of what I’d accomplished, but sad to be leaving my undergraduate years behind. A few years after graduation, I decided to work my way through a master’s degree in communication. And in 2002, I become an SDSU alumnus for the second time.

My husband, Bryan, is a fellow Aztec for Life. Bryan and I met our senior year at SDSU in an honor society. We didn’t date until many years later, but I think that perhaps our Aztec pride always connected us. I’d venture to guess that half our wedding guests bled red and black (the school colors). He’s also an SDSU alum twice-over, and currently works in the building next to mine on campus.

My first job after college was at KPBS, the local public broadcasting station that is located on the SDSU campus. After that, I joined the main campus in a professional position in one of the academic colleges. I then spent three years in the President’s Office and am now going into my sixth year in Enrollment Services.

I’ve spent more than 13 years working professionally at SDSU. And I must say it’s never been dull. Maybe it’s the youth and vitality of the students that keep the campus exciting. Maybe it’s the challenges and controversies that hit us each year (mascots, budget crises, athletic scandals, etc.). You can’t help but get caught up in the moment.

If I had to chose one campus moment that was truly special to me, it would be Election Day 2004. I was leaving my office in the late afternoon and turned around to see so many students standing in a huge line that stretched from one side of campus to the other, where the polling place was located. All these students were lined up, waiting to cast their vote and make a difference. I was so moved; it brought tears to my eyes. I know that election did not turn out the way many of us hoped. But seeing all those students was an inspiration and – as corny as this may sound – filled me with pride and gave me hope for the future.

The Aztec pride still runs strong in my family. All three of my sisters are Aztecs at least once. Between the four of us, we have six degrees from SDSU (four bachelor’s and two master’s degrees).

It’s too young to say whether Sophie will be an Aztec. I hope she aspires to whatever she wants in life and attends whatever college she so chooses. But she can already spot the campus from a distance. And even at 2-years-old, she shows such excitement when she goes to campus to visit “mommy and daddy’s office.” It mirrors the excitement I felt when I visited my dad’s office all those years ago.

My father still works at SDSU. He’s in his 31st year there. I used to wonder how on earth he could stay in one place that long and not be bored out of his mind. He would tell me that SDSU is like a small city … There’s so much going on and it’s always changing. Now that I’ve spent nearly half my life on the Montezuma Mesa, I can see what dad means.