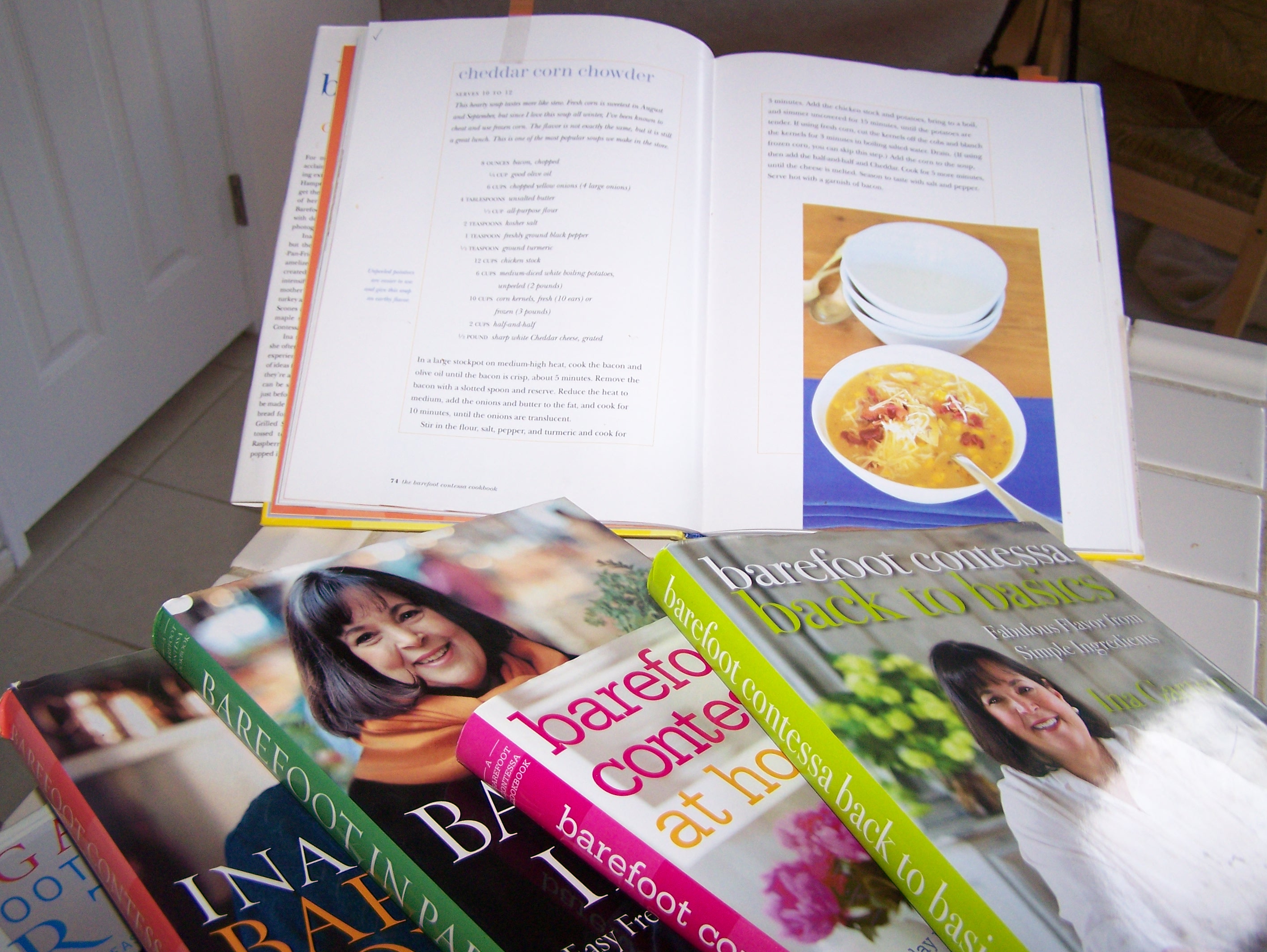 Barefoot (Contessa) in the Kitchen

Ina Garten – perhaps better known as the Barefoot Contessa – is a true inspiration to me. She is my cooking muse. I admire her recipes, style, attitude, and just overall love of good, quality food. I love how she makes every mix of a cake, beat of an egg, baking of a chicken look effortless. I would not be the cook I am today if it weren’t for the Barefoot Contessa.

I discovered Ina Garten more than a decade ago when I bought her first cookbook – The Barefoot Contessa – as a wedding shower gift for a friend. As I was thumbing through the cookbook, admiring the beautiful color photographs and conversational writing style, I realized I had discovered something very special. I was thrilled when I found her on The Food Network several years later and had the chance to actually see her recipes come to life. That’s when I really started getting inspired to cook like Ina.

For those of you unfamiliar with Ina Garten, she got her name as the Barefoot Contessa when she bought The Barefoot Contessa specialty food store in the New York Hamptons. Cooking and catering for this store is the genesis of nearly all her recipes. When she sold the food store, we amateur cooks were lucky enough she kept all those recipes, which became the basis for her first cookbook.

I bought that first cookbook and her five other cookbooks that followed. I already have the October date marked on my calendar when her next cookbook will hit the bookstores. Those books are staples in my kitchen, always on display on my cookbook shelf. Each of her books has a different theme – French cooking, family-style recipes, parties, and back-to-basic cooking. Her recipes always feature fresh, simple ingredients for a recipe that is never too daunting.

I had the chance to briefly meet Ina years ago when I took off work one day to drive 90 minutes to a Williams-Sonoma in an Orange County mall where she was doing a book-signing. (For those of you wondering, no, it was not in my current job this happened.) I stood in a long line with all four of my Barefoot Contessa books at the time. She signed them all and wrote “To Leah” in the newest book she was promoting. I told her I drove all the way from San Diego to see her. In her true, special Ina tone, she said that was so sweet. Whether she meant it or not, it certainly came across as genuine and meant something to me. My only regret is that I didn’t bring a camera to get a photo of the two of us. Maybe next time!

I have made so many of her recipes and I’ve never been disappointed. However her Cheddar Corn Chowder is a favorite in my house. I’ve probably made it upwards of 25 times. It’s absolutely delicious – just the right blend of salty white cheddar cheese, sweet crunchy corn, and savory bacon. This is a great winter or fall recipe. But with fresh corn coming into season, it’s great for a cool spring night as well. I tend to use frozen corn to make life easy or myself. And it’s perfectly fine without potatoes, as I’ve made it without when we’re craving this dinner and I don’t have potatoes in the pantry. I also cut the recipe in half when it’s just for Bryan, Sophie and me. It still makes plenty for dinner and enough for a few leftover servings the next day.

I hope you enjoy this recipe and the Barefoot Contessa as much as we do. Thank you, Ina Garten, for your inspiration and creativity, and for brining my cooking to life.