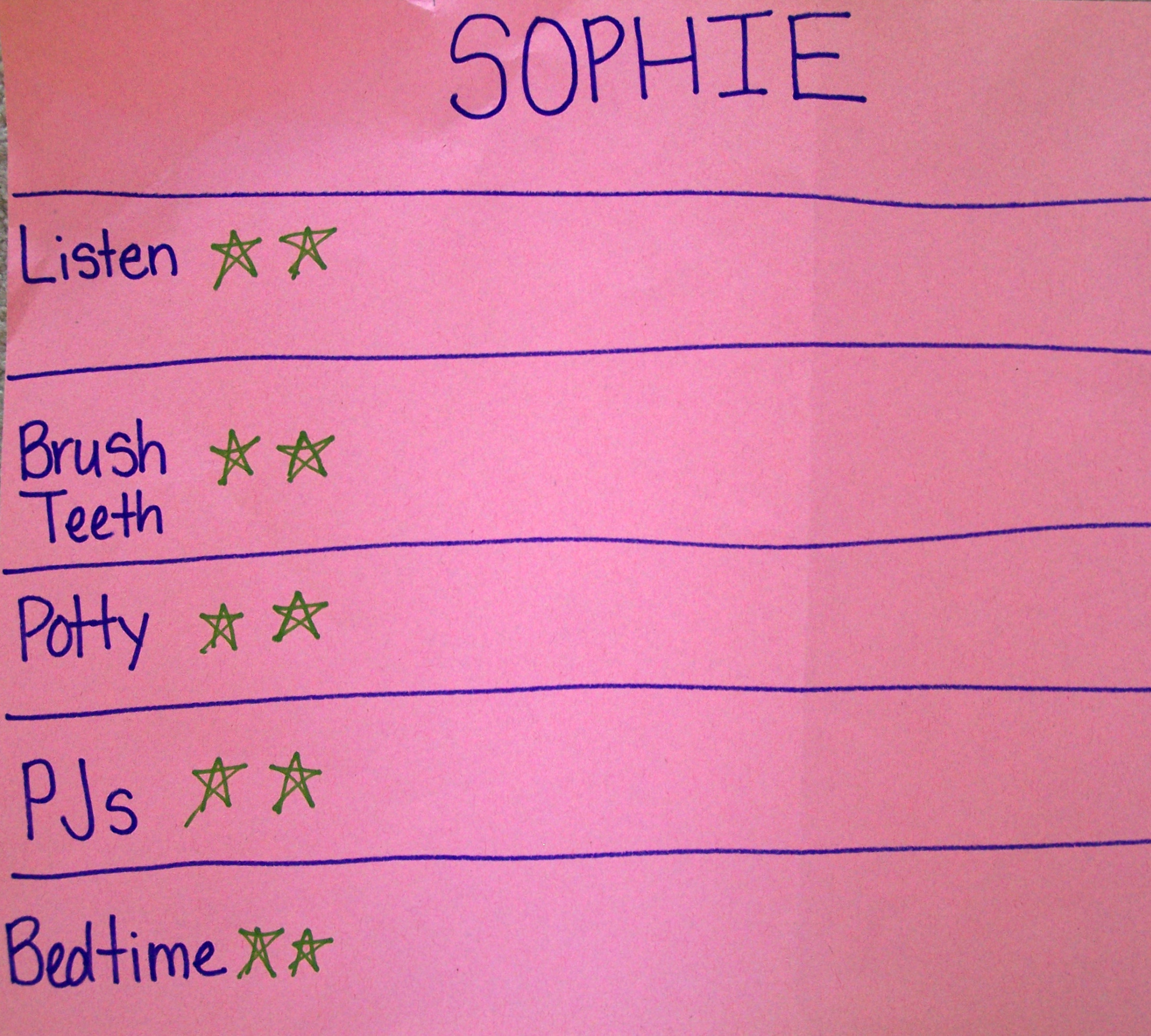 Becoming a Parent After 2 ½ Years

A wise friend once said to me, “No one is a parent after 8 p.m.” I have come to discover that she is so right!

Sophie’s bedtime has always been consistent: go upstairs, brush teeth, change diaper (now use potty), put on pajamas, read a few books together, get into bed, and fall asleep for an 8 p.m. bedtime. I’m big into routine and consistency – for Sophie, and also for me. It helps keep me sane in a very insane world. I don’t do well when routines change. Not the best quality for a parent, I know. I have gotten better … really!

A few months ago, Sophie decided to change up the bedtime routine – and NOT for the better. And thus, every part of bedtime became a struggle. And the icing on the cake was that she would not stay in her bed and would constantly exit her room.

It all started around the time Sophie began potty training. When she started using the potty, she’d lie down to go to sleep and then realize that she had to pee. Apparently this is normal, as kids don’t quite have control of the timing yet. And of course, we encouraged it because she would actually use the potty.

Well, Sophie quickly learned that the potty became a convenient excuse to get out of bed. And that was the beginning of the end.

Sophie began acting silly and goofing off, forcing us to struggle to brush her teeth, help her with pajamas, and she refused to sit on the potty until after she went down for bed. She’d be okay for story time (go figure!), but once it came time for actually staying in the bed and sleeping, all bets were off! I’d exit her room, shut the door, and not one minute later, she’d be opening the door with a grin on her face saying she had to go potty. Or something scared her. Or she had to tell me something. It just didn’t end! Some nights, this went on for an hour and a half – which of course made for a horrible next morning because she didn’t get enough sleep. I couldn’t do anything for myself because I was constantly walking her back into her room, forcing her back to bed.

Now I know many of you are saying this behavior is normal, especially for a 2-year-old. And you are absolutely correct. The frustrating part for me is that Sophie has always been so good at bedtime and I’ve never had a problem before now (please don’t hate me). So for me, this behavior was quite foreign and very frustrating. Also because I work at my “day job” all day, the only time I have for myself or to be with Bryan is after 8 p.m. So I get quite cranky if I do not get my time after 8 p.m. Hence the statement that nobody is a parent after 8 p.m.

Bryan and I tried so many things. We’d let her have her tantrum in her room; that didn’t do anything. We even put a baby gate outside her bedroom door so she literally could not leave the room. The first night of that, Sophie was thoroughly pissed. The second night, I found her in the room with the light on, building a fort with her stuffed animals. Apparently the gate brought a new sense of adventure. We were at our wit’s ends and had no idea what to do. But I knew that I couldn’t keep doing this bedtime dance much longer.

Then a few days ago, Bryan came up with the bedtime star chart idea. He asked Sophie if she wanted to earn golden stars. Of course, she was intrigued. He then told her that she has to do a really good job at listening, brushing teeth, sitting on the potty, putting on pajamas, and staying in bed at bedtime. And if she did those things, she’d get a star and a surprise at the end of the week.

As Sophie and Bryan headed upstairs to start the routine, I grabbed a piece of construction paper and markers, and made Sophie’s bedtime chart. And you know what happened? It worked! She even stayed in her bed and didn’t get out for the first time in months! And the mornings have been better because she’s had enough sleep. Now it’s only been three nights, but hey, I’ll take what I can get.

So this morning, Bryan and I were marveling about the great bedtime star chart, and he remarked, “I feel like we’ve actually become parents.”

Bryan said that he felt it was one of the first times we identified the problems and figured out what would motivate Sophie, and empowered her to improve the bedtime situation. It’s like we finally figured out one of the successful keys to parenting. Motivation and allowing the child to help control the situation (at least they think they’re in control). And the fact that both Bryan and I did this together, made him feel like we are, indeed, parenting together.

So now we have a child who seems to be going back to her bedtime routine. And after 2 ½ years, Bryan and I have become parents. That is, before the clock strikes 8 p.m.