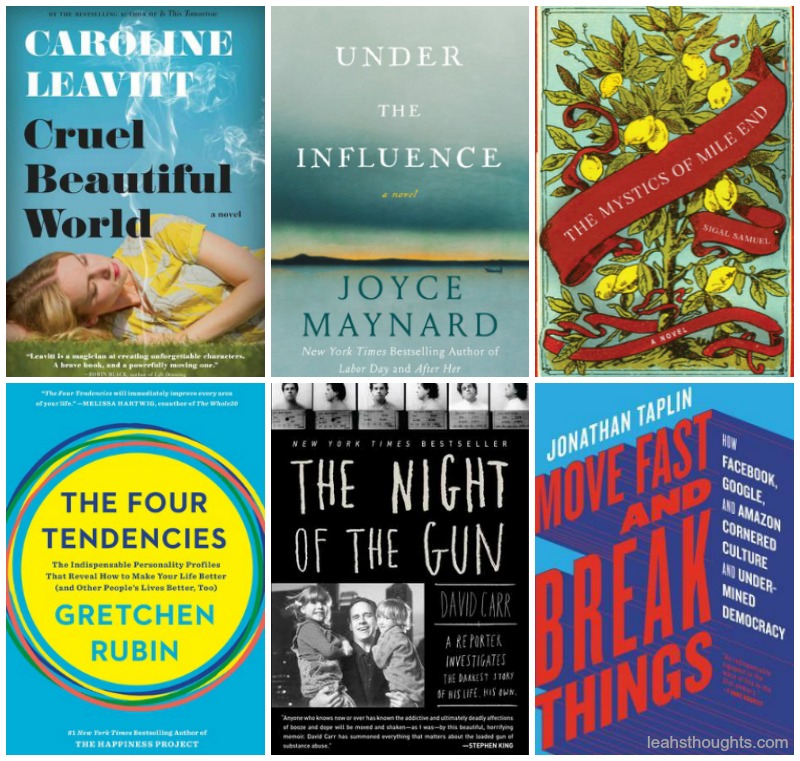 Best of the Year: Read, Listen and Watch

I realize we’re nearly at the point where we need to stop posting “best of 2017” or “2017 recap” posts. But before we go too deep into January, I thought I’d share some of my favorite reads, listens and watches of last year. Technically, these are not 2017 specific; meaning not all my recommendations were released last year. But they are what filled my brain in the year prior.

Admittedly, I did not read as much in 2017 as I have in the past. This is undoubtedly due to having cable for the first time in years and binge-watching television shows in the name of “research” for my novel I’ve yet to write (hey, there’s always 2018!).

Someone recently asked me when I read books. Since most of my day is spent writing and working on the computer, I don’t read much during the day. I always read before going to bed as I find that helps clear my mind before drifting off. I also try to make some time on the weekend to sit on my sofa and read. The other thing I do is I always bring a book with me when I have to wait places, especially activities that Sophie is doing. For example, if she has volleyball practice or a birthday party, I bring a book with me and read it there.

Here are the stand-out books I read last year:

Cruel Beautiful World, Caroline Leavitt — This was such a beautiful, haunting and compelling story, about very flawed but real people. I read this book in two days. Here’s the description: “Set in the early 1970s against the specter of the Manson girls, when the peace and love movement begins to turn ugly, this is the story of a runaway teenager’s disappearance and her sister’s quest to discover the truth.”

The Four Tendencies, Gretchen Rubin — I’m a big fan of Gretchen Rubin. Here she breaks down four personality types and how they respond to inner and outer expectation. She writes that understanding this framework helps us make better decisions, meet deadlines, suffer less stress and burnout, and engage more effectively. Those Four Tendencies are: Upholders (that’s me), Questioners, Obligers and Rebels.

Move Fast and Break Things: How Facebook, Google, and Amazon Cornered Culture and Undermined Democracy, Jonathan Taplin — This fascinating book essentially confirms that Facebook, Google and Amazon are crushing creativity and making it harder for artists, musicians and writers to earn a living. But on the plus side, it made me feel justified purchasing CDs and books as much as I do.

Under the Influence, Joyce Maynard — I love anything Maynard writes. Her characters are always compelling and not quite what you expect. The book tells the story of Helen, who recently lost her marriage and custody of her 7-year-old son due to drinking. Now in recovery, the book follows Helen on her journey and the relationships she becomes entrenched with during her sobriety.

The Night of the Gun: A reporter investigates the darkest story of his life. His Own, David Carr — I could not put this memoir down. Carr, a lifelong reporter, spent three years investigating his own life of addiction and crime, using techniques such as videotaped interviews, legal and medical records, and reporting. What results is a fascinating true story.

The Mystics of Mile End, Sigal Samuel — I found this book on a whim in an independent bookstore, and only picked it up because I was drawn to the cover. But in this case, I will judge a book by its cover because the story lived up to its outer beauty. It’s the story of a struggling family looking to find spiritual meaning in their lives.

I alternate between listening to music and podcasts. Music is always my go-to for running and driving. But I enjoy podcasts when I’m at my desk and doing things around the house that don’t require a lot of concentration. Here’s what I discovered last year that keeps me inspired.

How I Built This Podcast — This NPR podcast is a series of stories about innovators and entrepreneurs, and what’s behind the movement and company they started. The podcasts include the story behind companies such as Melissa & Doug, Spanx, TOMS, Whole Foods, CLIF Bar, Airbnb, and so many more.

Song Exploder — This podcast has been around for quite a while, but I just recently started listening to it. In each episode, a musician takes apart their songs, and piece by piece, tell the story of how they were made. I don’t listen to every episode; just the ones where I’m intrigued by the artist or song. Some of the musicians include: R.E.M. (“Try Not to Breathe”), Norah Jones (“Day Breaks”), The Lumineers (“Ophelia”), Wilco (“Magnatized”), U2 (“Cedarwood Road”), and so many more.

Making Oprah — Since Oprah is trending right now, you may want to check out this limited series about how the “Oprah Winfrey Show” began and its journey. Like so many of you, I used to come home from work and watch the show. It’s fun to revisit some of the topics and hearing Oprah herself.

Jason Isbell and the 400 Unit, “The Nashville Sound” — I think Jason Isbell is an incredible songwriter, and the songs on this album have made me hopeful, pensive and broken me down in tears. All the feels on one great album.

The New Basement Tapes — This was released in 2014, but I discovered it last year and have been listening to it since. The album is a collection of “lost” Bob Dylan songs sung by today’s popular artists such as Elvis Costello and the singers that front Dawes and Mumford & Sons. Good stuff!

I’ll try to limit my television choices since this post is already quite long. Here are my favorites in 2017.

“Halt and Catch Fire” — This is one of the best shows I’ve ever watched. It’s a fictional (based on true events) story that centers around four characters during the 1980s personal computing boom in Silicon Prairie and later moves to Silicon Valley. I don’t know why more people haven’t watched this AMC show, but you have no excuse now that all four seasons (the entire series) are on Netflix.

“Better Call Saul” — I know this is a controversial statement, but I actually like this spin-off better than “Breaking Bad.” The show keeps getting better, and season three was no exception.

“The Marvelous Mrs. Maisel” — What a gem of a show! In 1958 New York, Midge Maisel has the perfect life: husband, kids, and an Upper West Side apartment. But when her life takes a surprise turn, she explores her talent as a stand-up comic and learns about herself along the way. I loved this show, and not just because it was funny. I loved Midge’s self-discovery, the costumes and 1950s New York.

I hope you found a few things to read, listen to and watch this year. Now if only I could find more time in the day to enjoy all these favorite things of mine!

What was the best book you read last year? Do you have a podcast, piece of music of television show you loved?