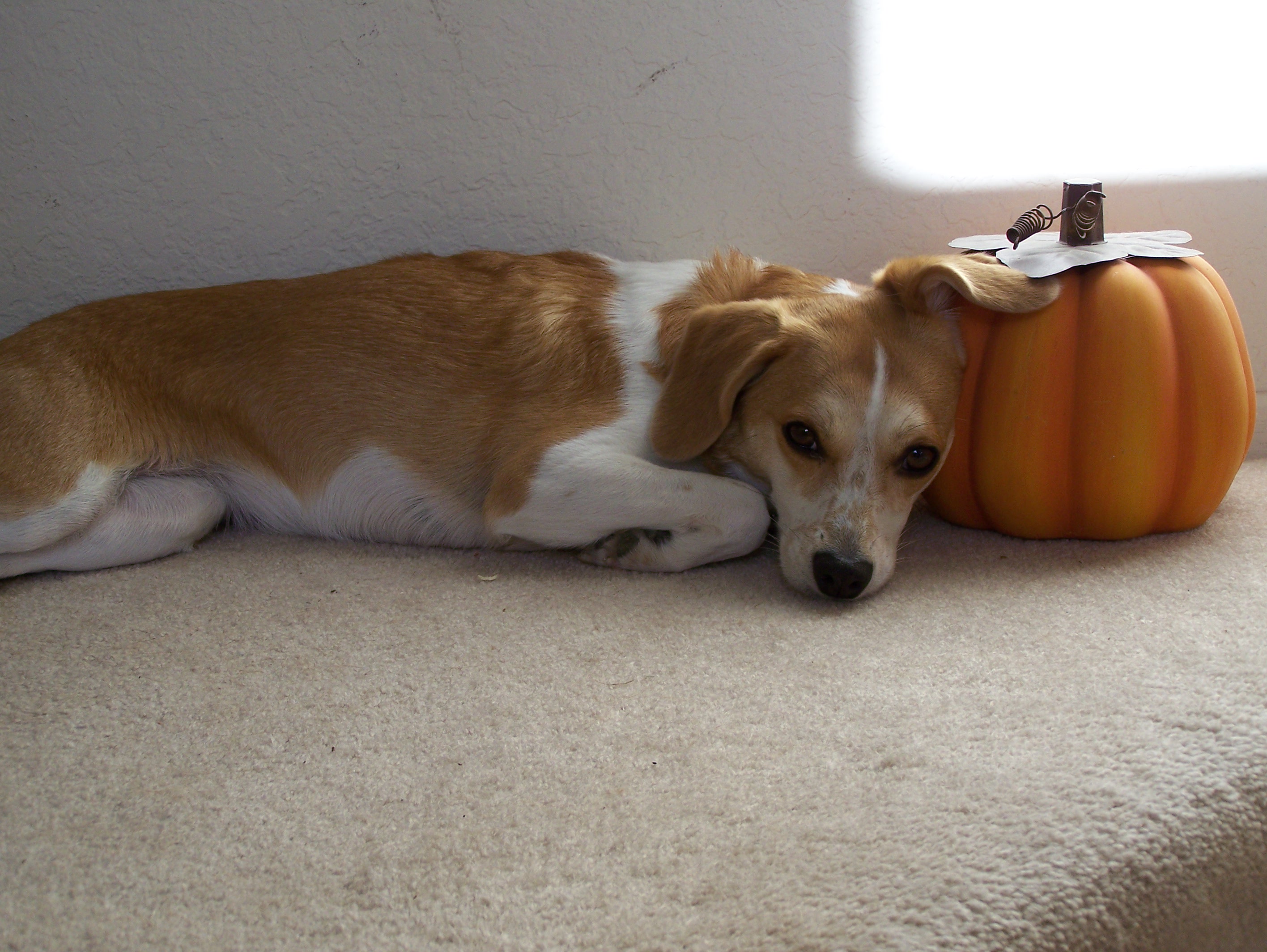 You were introduced to my golden buddy, Romeo, in Man’s Best Friend. Now I’d like you to meet the very unique and hilarious Casey. She is my baby; my first born. Casey Puppin’ Head (as I like to call her) is my 5-year-old beagle/American Eskimo dog. She is how I cut my teeth for being a parent and dog owner.

It was about five years ago when Bryan and I moved into our first house. We were so excited to have a yard knowing that we’d one day get a dog. I had no idea about dogs, breeds, what type you should have at home, puppies versus older dogs; adoption versus purchase. I knew nothing.

What I did know is that when I saw Casey’s photo on a local pet store Web site, I had to immediately meet that dog. Bryan and I decided right then and there to drive to the store and see this dog. That’s right; Casey is from a pet store. I’m not proud of the fact that we bought her from a pet store. Knowing what I know now about dogs, adoptions and puppy mills, I would look elsewhere for a dog. (In fact, we did with Romeo.) But that was then and there’s nothing I can do about it now.

They brought Casey into a little booth area so that Bryan and I could interact with her. When knew instantly that Casey was the one. She was playful, but also shy, slinking over to us and hiding between our legs. She was the cutest little dog I’d ever seen. Since we were completely unprepared for anything, we decided to come back the next day to pick her up. And that we did. Casey was so small and scared to leave the store that we had to carry her little 7-pound-body to the car with us.

Let me first say a few things about the beagle. A beagle is a hound, which are bred instinctually to go away from its home to sniff out prey. Chances are if you see a dog with its head and nose close to the ground, it’s likely a hound. They follow their nose to no end. When they find the pretty, they signal the owners by howling.

Casey’s other half is an American Eskimo dog, which are smaller, fluffy dogs that are very trainable and good companions. They are often referred to as “circus dogs” because they are quick to learn tricks and they are on the smaller side.

Casey is a classic combination of both. She is very friendly and was pretty quick to learn tricks. But she also howls, though not quite as deep as a pure-bred beagle. Her strongest beagle trait is that her nose knows no end. Where Romeo is perfectly content sitting on the grass watching Bryan do yard work, Casey will do no such thing. Her nose never stops working and she does not sit still when there are scents to be followed.

It took a LONG time to house-train Casey for one main reason. As I mentioned earlier, beagles are constantly sniffing. A tip trainers often tell puppy owners is that if a puppy is sniffing the group, take them immediately outside to go potty since that’s a strong indicator they are looking for a spot to go. Well, since Casey is a hound and spends nearly all day sniffing, we had no idea when she had to go to the bathroom, or if she was just “beagling.” It seemed like whenever we assumed one, it was always the other.

Food is Casey’s downfall. She loves food so much that it sometimes overrides her highly trained sensibilities. She can often be found following Sophie around the house when Sophie is snaking on goldfish, cheerios or cheese. She also sits right under the dinner table or next to Sophie’s chair, hoping that one little morsel will fall to the floor for her. We have – on many – occasions found Casey red-pawed with a deli sandwich, a brownie, and Sophie’s lunch, just to name a few. Most recently, Casey made her way on to the kitchen counter and finished half a hamburger quiche. The leftover salad, however, went untouched.

As much as Casey loves food, her kibble is the last to go. Casey waits all day – until every last dish is washed and every piece of dinner is stowed in the fridge – to eat her dog food. I guess I’d be the same way if I had to eat that stuff.

Because Casey is food-motivated, she learned commands and trained very well as a puppy. She knows several commands – sit, down, roll over, play dead, touch, bark. She also walks well on a leash (much better than her Golden Boy Brother). But the neighborhood smells do tend to overpower the urge to walk straight ahead. She tends to lag behind smelling anything new.

Casey likes toys and playing with Romeo. She loves to bring us a squeaky squirrel or toy to throw and then she’ll retrieve it. She loves sniffing around the backyard and laying in the garden patches. She’s a terrific guard dog and will howl the minute she sees someone walk by the house. This small dog is sometimes so sure of herself that I’m pretty sure she thinks she’s actually a pit bull. But I do fear that if a burglar gave her a stick of jerky, her loyalties would be shifted in an instant.

Casey loves Sophie! She always rushes into Sophie’s bedroom after her nap to greet her. Though she’s not as patient as Romeo is when Sophie wants to dress her up, she will roll around and play with Sophie on the floor.

Casey definitely has a daily routine as well. Sometime after we leave the house, Casey does two things. First, she pulls my bath towel off its rack and rolls herself around in it. I know this because I come home ever day to my towel on the floor. The other thing Casey does is pick one of Sophie’s stuffed animals to, uh, “have her way with.” Not a day goes by that we don’t find Elmo, Big Bird, a teddy bear, Clifford, or more recently, Minnie Mouse sprawled out at the bottom of the stairs looking deflated. I’ve seen her do it too. Casey sneaks up onto Sophie’s bed and finds whatever animal that crossed her that day. She grabs it with her mouth, runs around the house with it, all while playfully growling at the defenseless piece of plush. When she’s done, it’s left for Sophie to find when we get home. Perhaps this is why Sophie thinks her animals are real.

What are Casey’s downfalls? She BEGS for food and follows underfoot while I’m cooking. She hates crows. In fact, if you say, “There are crows in the yard!” she will run out the dog door in full force howling at the wind (or crows). This has become especially funny to see Sophie do. Casey is also not a fan of lizards or cats.

That little dog is such a joy in my life. I love sitting with her on the couch, stroking her silky beagle ears and seeing her bury her little nose under my leg or a blanket. I’m glad she sleeps above my head each night and I sometimes feel her little face against my hair. Thank you, Casey, for being my first baby and a great one at that!