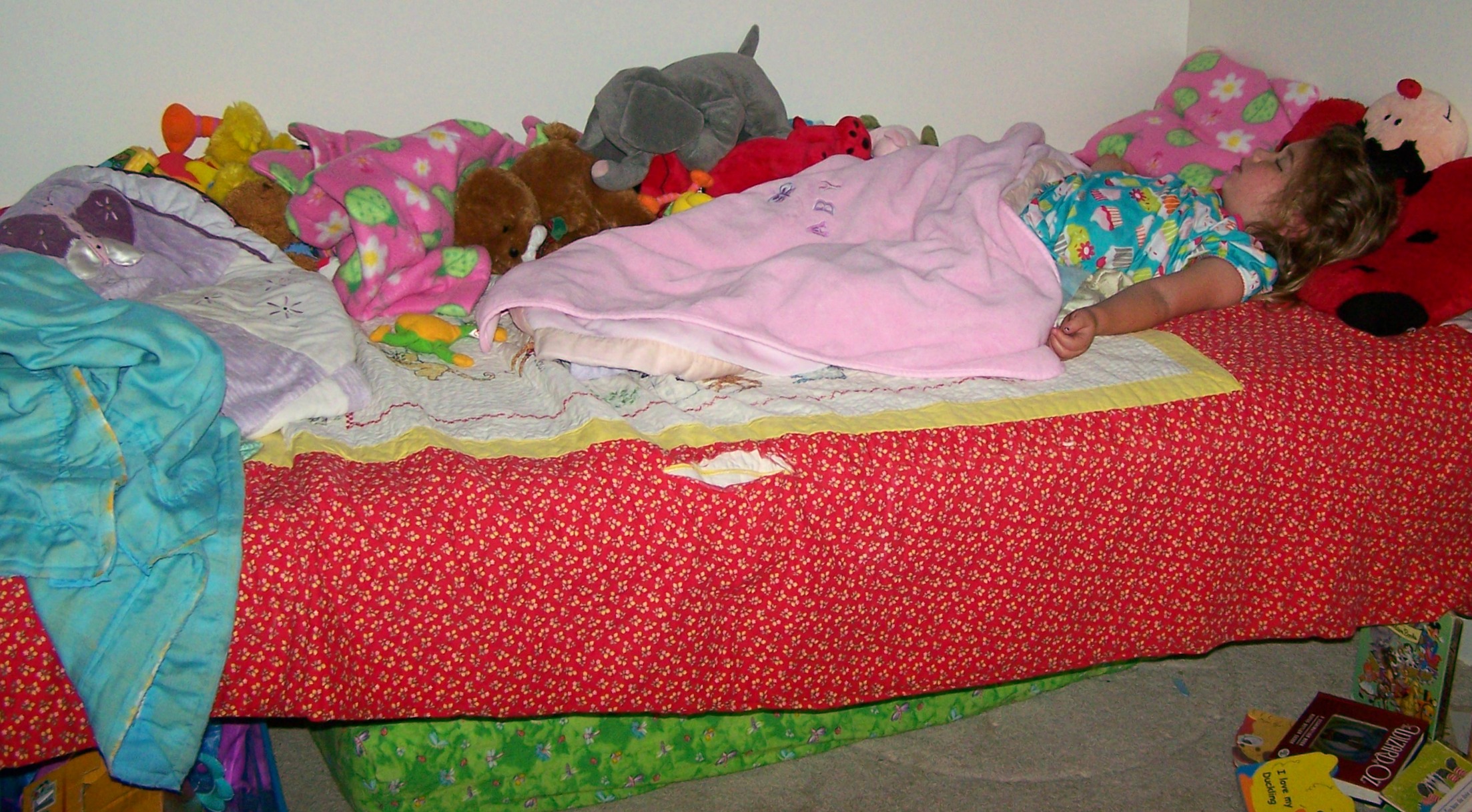 Sophie has always been a good sleeper. She slept through the night at a very early age. And once she fell asleep for the night, she rarely woke up until morning. But nightmares struck Sophie a few months ago and the sleeping situation has not been the same since.

Sophie’s woken up scared from bad dreams before. But this time was different. This time, the bad dreams happened more consistently, nearly every night. And Sophie was able to tell me what was scaring her and what the nightmares were about.

It started with Sophie waking up screaming in her bed. I’d go into her room to find her upset, sometimes not even awake. I’d give her a kiss, tell her mommy was here, make sure she had her safety blankie, and I’d be on my way. If she was awake and really scared, I’d hold her in her rocking chair until she fell back asleep. Then an hour later, the bad dreams struck again. And then again. You know the drill. Those long nights with constant interruption made me feel as if Sophie was an infant all over again. Not fun for me or Bryan. Certainly not fun for Sophie.

After this went on for at least a week, Sophie began to tell me that monsters were under her bed or were in her dreams. One morning she told me specifically that she had a scary dream that monsters were chasing her so she had to find me to feel safe.

And that’s when the sleeping situation changed. Sophie fell asleep fairly easily at bedtime (and still does). But sometime after 2 a.m.,  she entered our bedroom, sneak up close to me, and whisper, “Mommy, can I lay with you?”

Up until now, Sophie wanted nothing to do with sleeping in our bed. When she was a baby, I tried co-sleeping thinking it would make the night-waking and feeding easier. But no, Sophie would not have it. Many a time, I’d ask Sophie if she wanted to lay with me when I was trying desperately to nap. Nope. She wanted her own space. I can’t say I blame her.

So now – when she began asking to sleep in the bed – I had no problem letting her climb right in. I assumed this was her way of needing security. I didn’t feel right kicking her to the curb if she was scared.  So this became a semi-nightly pattern for Sophie and me.

While I was impressed that a 3-year-old could articulate her dreams and that she sought me out for comfort, I was unsure how to help her (aside from scooting over in the middle of the night).

Sophie’s former childcare provider suggested asking Sophie to come up with strategies for defending herself from the monsters. Perhaps give her a flashlight. Good suggestion, I thought. But when I mentioned it to Sophie, she starred at me and said, “Mom, I don’t want to SEE the monsters.” She had a point.

Then said childcare provider suggested I ask Sophie (in the morning) more questions about the monsters; What did they look like? Where did they hide? Are they nice? Do they only live in her room? Do they like to hide in other places in the house? What color are they? The idea behind asking Sophie these questions was to get her talking about the monsters, making them less scary.

I tried this technique, and believe it or not, it worked! Sophie told me the monsters were black; they weren’t very nice. The monsters didn’t want to hide anywhere else, etc. And amazingly, that night, Sophie didn’t make a peep and stayed in her bed ALL NIGHT! The next morning, Sophie proudly said to me, “Mom, I stayed in bed. The monsters didn’t come!” The next night, Sophie said, “Mommy, I didn’t need to come in your bed because I wasn’t scared.” Hearing this from Sophie, I felt like I really succeeded as a parent.

Now I must confess that while the technique worked, the sleeping arrangements are still up in the air. Sophie later decided she likes coming into our bed at night. When I ask her why, she said she feels safe with us. So while the monster are gone (we think), she still feels like sleeping with us in the “wee small hours of the morning” are more safe than sleeping alone.

I know it may be a habit at this point and I do feel somewhat guilty there’s yet another creature sleeping in the bed. However there’s a part of me that doesn’t mind it either. It’s a nice extra few hours of bonding we have since we’re apart nearly ten hours each weekday.

If it is a stage or habit, I’m sure she’ll grow out of it when she’s ready. I’ve yet to see a teenager in their parents bed at night. I want Sophie to feel safe and happy. If this is what I need to do right now, then monsters or no monsters, I’ll do what it it takes for my daughter.