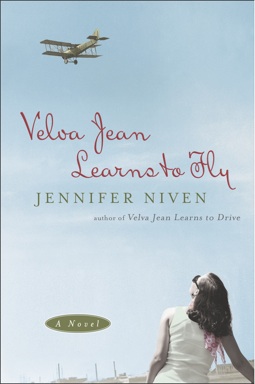 This post was originally published on Great Thoughts on February 8, 2012.

While Niven has been a self-proclaimed writer her entire life, her first non-fiction book, The Ice Master, was published in 2000. Ada Blackjack followed, as well as a memoir of growing up in middle-America.

Velva Jean was born in a short story Niven’s mother, Penelope, wrote many years ago about a woman in a small North Carolina town who teaches herself to drive out of necessity. Flash forward several years when Niven was in film school in Los Angeles and needed to develop a thesis project. She immediately thought of her mother’s short story and decided to bring Velva Jean to life. The story turned into a short film that won an Emmy award. Several years later, Velva Jean Learns to Drive was published.

Niven said her mother is so pleased the heroine created decades ago has been taken places she could never imagine through her daughter’s writing. “She does wish she charged me more than $1 for the rights though,” Niven jokes.

While Velva Jean lived in the World War II years of the 1940s, Niven said the character is very autobiographical.  “There is a lot of me in her,” said Niven. “Like the quirky ways she looks at things, her fortitude and positivity, and how she believes in going after her dreams.” In addition, Niven relates to the way Velva Jean taught herself to drive to get out of a tough situation. She herself has been through similar emotional struggles.

“If Velva Jean could do it, so could I,” said Niven.

Niven admits she has had many professional aspirations in her life, including acting and being a rock star. However writing has been a constant since her childhood.  “My mom is a writer,” Niven said. “She had writing time at her big desk. And I’d write at a little desk. Writing was always what I loved doing the most.”

She spends a year researching and writing each Velva Jean book. And even as she is writing the current book, Niven is editing and promoting the one that came before.  September 2012 will see the release of Becoming Clementine, the third in the Velva Jean series in which the heroine becomes a World War II spy. She is already working on the fourth book, but admits she is not yet sure how the story will end.

Niven continues to be inspired by Velva Jean, this woman who is inspired to live out her dreams. “The biggest reward is when readers tell me how much Velva Jean inspired them to get out of unhealthy bad relationships or go after a dream they forgot. She gives people the courage to do what they dream. To me, this feedback from readers is the most rewarding part of all.”