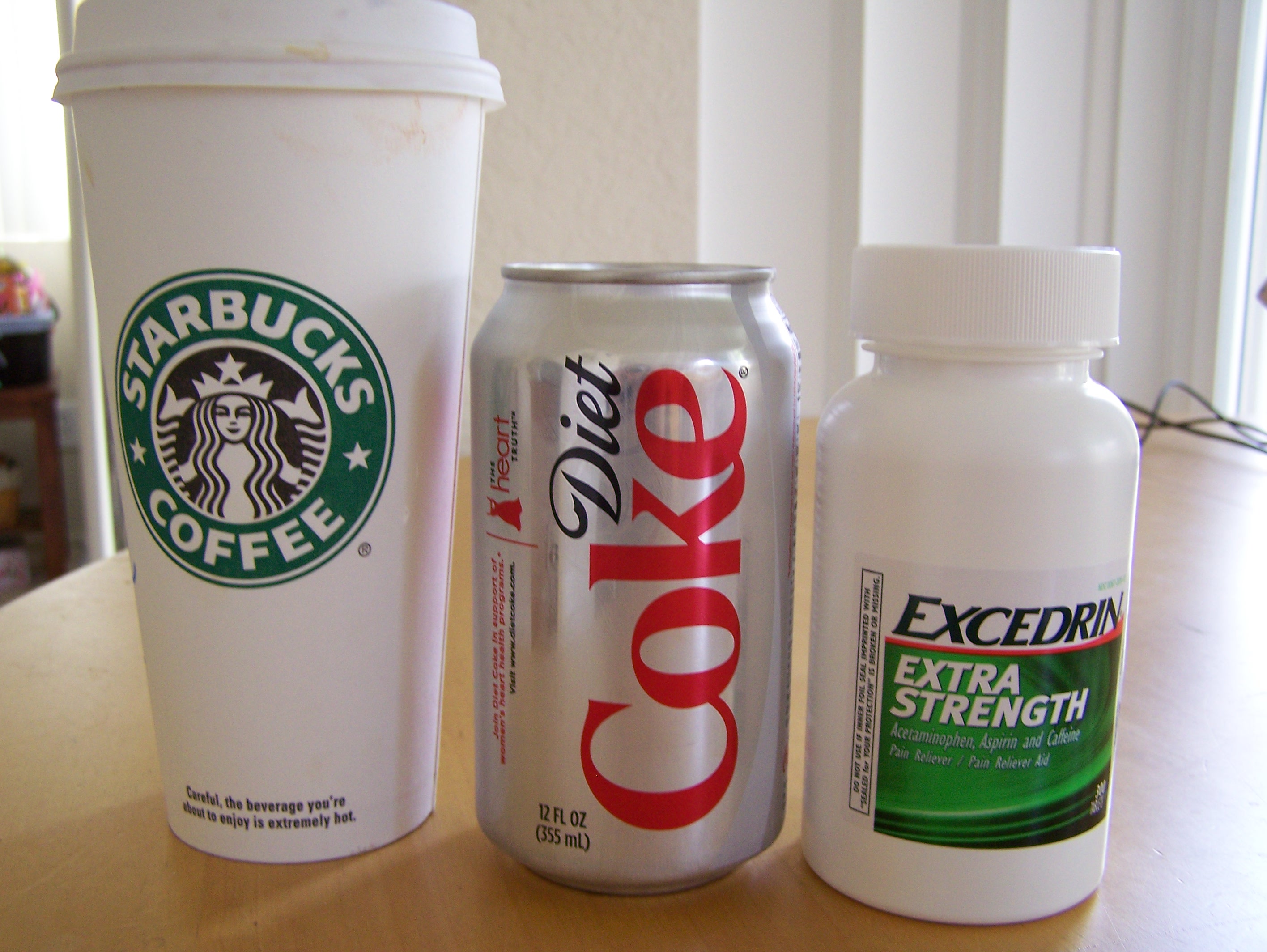 I am currently on Day 2 of not taking any over-the-counter pain medications (specifically, Excedrin). I must continue this regimen for the ten days leading up to my sinus surgery because I cannot have any aspirin or blood-thinning products in my system. This may not seem like a big deal. But to me, this challenge is no easy fete. You see, I am addicted to caffeine.

Isn’t nearly everyone, you ask? Most regular coffee drinkers will develop some form of addiction to the caffeine in their daily dose of Joe. However, a little-known fact is many over-the-counter pain medications contain caffeine, usually those that target headache pain. This is the heart of my caffeine addiction. It’s not only from the caffeine in coffee, but from the over-the-counter pain medication.

Let me back up and give some background.

I am prone to headaches. In fact, I think I’ve been getting headaches since I was a kid. Later in life, I learned that over-the-counter pain relievers will eliminate the pain. Products like Excedrin and Anacin worked the best because of the caffeine that’s contained in those medications. Caffeine opens the blood vessels, thus working magic on headaches.

But there’s the rub! That same caffeine that helps relieve pain can become addictive. So after you’ve been taking it for some time and you stop, the headache will come back in full force, causing you to take another Excedrin to get rid of the pain. It’s a vicious cycle!

For the longest time, I couldn’t figure out why I always got headaches. There was nothing physically wrong with me and I didn’t have migraine headaches that can be treated with specific pain medications. Then several years ago, I read an article about a fairly new concept called rebound headaches. The article described the rebound headaches as the scenario above, where you basically become addicted to the caffeine in the over-the-counter medication. A light bulb went off in my head. This was the answer; this is what I had!

Unfortunately, the only way to cure rebound headaches is to stop taking the medication, usually cold turkey. This means that the headache will come on quite intensely and there’s nothing that can be done. And before anyone suggests Ibuprofen or Tylenol, let me just say that these headache want only what they’re used to. Those pain relievers will not work (I’ve tried). It takes about ten days for a substance to leave the body. So once I stopped the Excedrin, I would likely experience severe headache pain, nausea, irritability, inability to concentrate, basically all the symptoms of withdrawal. But the good news is that if I could make it through the ten days, I’d likely be headache free.

So back in August 2006, I decided it was time to detox. I knew if I was going to be pregnant at some point soon, I had to rid my body of caffeine sooner rather than later. So I picked a day and stopped – Excedrin, coffee and Diet Coke (my three good friends). And let me tell you, it was torture. I had a splitting headache for days. I was irritable and sick to my stomach. I remember sitting in my office with the lights overhead glaring down on me and me being unable to focus on anything. It was not a fun. But when the ten days were up, I was headache free and remained that way!

Well here I am now, four years later. When I returned to work after Sophie was born, I re-introduced caffeinated coffee to my regimen. It was just too hard to be alert for work while I was taking care of an infant. And before I knew it, I was hooked again. The headaches returned and I went back to over-the-counter pain reliever.

So given all this, I’m quite nervous about what this ten days will bring. I know I shouldn’t focus on the worry, which will likely make it worse. But it’s there, in the back of my mind (along with a slightly dull headache).

Fortunately this time around, I don’t have to give up caffeine itself. So I can at least detox “warm turkey” by continuing to drink coffee. I’ve chosen to do that because I don’t think I can take the pain of a headache and withdrawal for ten days since I now have a toddler I’m responsible for. But we’ll see. I don’t think I’ll be drinking much coffee during and after the surgery. So maybe this experience will serve as a full detoxification. I guess I’ll soon find out.

Wish me luck on the next eight days of detox and try not to be too upset if you pass me in a Starbucks.

NOTE: If you’re experiencing the same rebound headaches, do not attempt to detox by yourself. First see  a doctor to make sure there are not other ailments that need treating. Your doctor can help you focus on the best course of action.