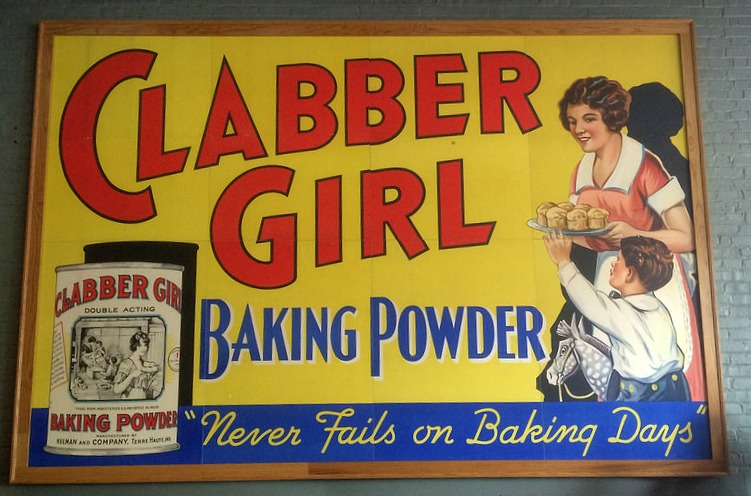 Chances are you have (or had at one time) a can of Clabber Girl baking powder in your pantry. What you may not have realized about that famous can of leavening powder is it’s manufactured here in Terre Haute, Indiana!

Quick history lesson: In 1850, Hulman & Company was formed when Francis and Herman Hulman moved to Terre Haute from Germany where they made a living running a mercantile. In 1858 they opened a wholesale grocery in Terre Haute and then in 1892 opened the Hulman Building, located near the Crossroads of America (see below photo). Another little-known fact: The Hulman family also owns the Indianapolis Motor Speedway, which is home to the Indy500 races. Tony Hulman Jr. bought the speedway in 1945 as a venue to promote Clabber Girl. I’d say he succeeded! One of the first places I visited when we moved to Terre Haute was the Clabber Girl Museum and Bake Shop, which is the same building that opened in 1892. The company continues to manufacture baking powder, along with corn starches and other spices. It’s also home to an incredible (free) museum that shows the history of Clabber Girl, Hulman & Company and Terre Haute. It also has really cool, lifelike displays that illustrate the history of Terre Haute and how baking in America has evolved over the past two centuries.

You can venture around the first floor and check out the historical equipment. And of course, you have to have some coffee and baked goods in the cafe. Traveling on U.S. Highway Route 40, which takes you into Terre Haute, is the Clabber Girl sign. It is Indiana’s oldest billboard that was first put up in the 1930s, and it always has a working clock. So now you know a little more about my new town and some of its historical significance. And every time you reach for your Clabber Girl baking powder, you’ll know it’s manufactured at the Crossroards of America!

Let me know if you ever come to Terre Haute and I’ll buy you a cup of coffee and pastry from Clabber Girl!