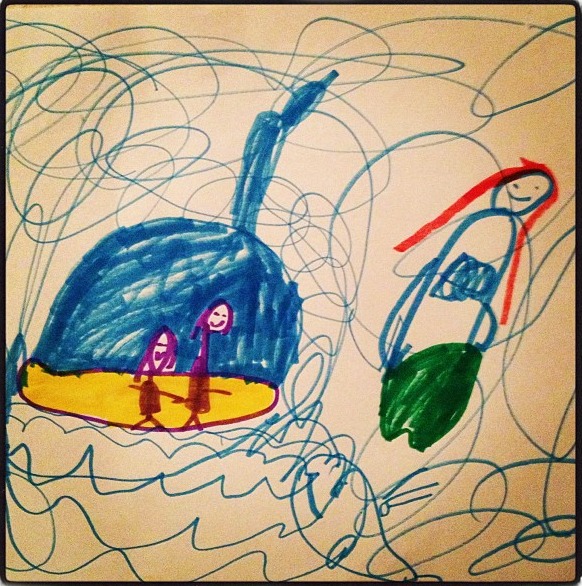 Drawing Her Own Story

A few months ago, Sophie decided she wanted to sell her drawings. As in, the drawing she creates herself.

After getting her first glimpse of sales success with lemonade stands last summer, Sophie was invigorated with the process of creating a product and selling it for money (25-cents, to be exact). Although it was a small endeavor, the lemonade stand was a great lesson in sales and hard work.

So naturally, Sophie began brainstorming what else she could sell to earn money. While I can certainly understand paying a quarter for a cold glass of lemonade, I wasn’t quite seeing asking people to pay for a kid’s drawing.

I was hoping the idea would simply wither on the vine. But Sophie had other ideas. And that day, she got to work drawing countless pictures of different themes and various colors. She set up a sales stand and decorated a sign that read “25 cents” for every drawing.

Personally I was a bit conflicted. I didn’t want to squash her spirit, but I thought to myself, Who is going to buy these drawings?! Isn’t she just setting herself up for failure?

I could have stopped the venture. But I chose not to. Simply because this was her activity and I didn’t want to stand in her way. If she fails to sell, she’ll learn a lesson. If she does sell, then I’ll learn a lesson.

And then a funny thing happened. Some neighbor kids thought the pictures were pretty cool. Both of them excitedly brought her a quarter and purchased a drawing. Even though the neighbors were her only customer, Sophie was thrilled that someone wanted her pictures.

It was certainly a lesson to me: What I think may be lame may not be to younger, more imaginative minds.

A week ago I had the pleasure of seeing Saving Mr. Banks. I was blown away by the beauty and story of the movie, which is about the making of the Mary Poppins movie and Poppins book author, P.L. Travers. Besides being left in a pool of tears, I exited the theater with curiosity — about the Mary Poppins books, P.L. Travers, and Walt Disney himself.

Walt Disney was not just the inventor of a theme park and movies, but first and foremost, he was an artist who sketched pictures of animals and a now-famous mouse. Before Mickey, Disneyland, and Mary Poppins, Walt Disney was a kid with an imagination, a pen, and and entrepreneurial spirit.

And what did Walt do to make money when he was a kid? He sold his drawings to people for coins.

I thought back to Sophie and her drawing sale, and had a moment of humility. I’m certainly NOT suggesting that Sophie is the next Walt Disney. But it did make me realize: Look at what can happen if you leave a kid to his imagination and spirit.

Knowing what I do about Sophie and now Walt Disney, I have certainly learned not be so quick to judge the ideas and determination of a child. I’m sure people thought Walt Disney was crazy for selling his drawings too. But I think Walt himself would agree that what is magical to a child may not be understood by adults. But that same magic can – and did – change the world.