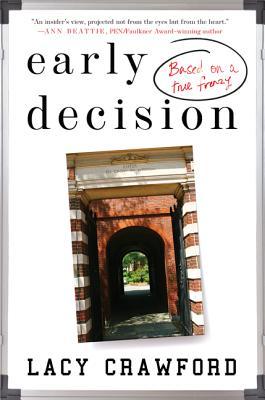 The all-important date of October 1 is drawing near. What’s so critical about October 1, you ask? The date has little significance for most people in the world. But for those familiar with college admissions – including high school seniors – October 1 is the day that most universities start accepting applications for admission.

Lacy Crawford, author of Early Decision, is all-too familiar with this deadline. Lacy is considered an “application whisperer” to upper-class households with elite kids applying to colleges. Her novel, which is “based on a true frenzy,” follows five high school seniors from August of their senior year until they hit “SUBMIT” on the college applications. All five students are working on their applications with the help of Anne, an independent college counselor whose phone number is a rich parent’s best-kept secret. The book is a fictionalized account of Lacy’s experiences.

The students in the book – as well as all the actual students applying to college – spend an enormous amount of time and mental energy writing the perfect college admission essay in hopes of the coveted offer of admission to their schools of choice. It is both heartbreaking and jaw-dropping to read about these students, their college admission essays and the lengths to which their parents will go to make sure they are admitted into the “best” school possible.

One of the reasons I found this book so intriguing is because of my own experience with college applications. For several years when I was at San Diego State University (SDSU), I oversaw communications for the SDSU Office of the Admissions. While I was not the person in charge of making admission decisions (thank goodness for that!), I was involved extensively in the communications process and I personally penned several of the “Congratulations, you’ve been accepted” letters, along with the “Sorry, you were not selected” variety.

Unlike the colleges that the students in Lacy’s novel were applying to, San Diego State is a large public university that does not require a personal essay for admission. Decisions were based strictly off a formula that took into account the high school Grade Point Average and an SAT /ACT test score. But even with a cut-and-dry formula, it was still heartbreaking to see how few students were accepted and how devastated many were when they were notified they were not going to SDSU.

So many people think that admission to a public university is an easy thing. But when that university relies on California state funding to determine the number of students it can admit, there were times when only 6,500 seats were open to more than 65,000 applicants. That’s an awful lot of students who were not  admitted. In that respect, I certainly related to the desperation felt by the parents in Early Decision when it came to getting their son or daughter into college.

Early Decision is a fascinating look at the college application process from the point of view of the parents and students. Lacy makes great points in the book, including how students are not taught to explore their interests (by parents and high school); how ill-prepared a kid is to write a personal essay; and how so many public high schools are not able to navigate admission to top universities. The book is also entertaining and relatable to any parent who wants the best for their child and to see them achieve success.

Disclosure: I received a complimentary copy of Early Decision to review for this blog post.  All opinions are my own and I only endorse books that I am proud to recommend to others.