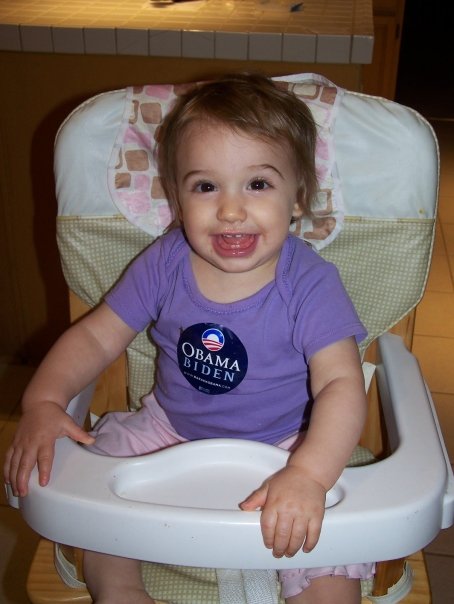 Election Day from the Mouths of Babes

Today is election day in the United States and most of us Americans are going to the polls to elect a president (along with a few congresspeople, mayors, and propositions). Never resisting an opportunity for a teachable moment with Sophie, I decided I should inform her of what is happening in our country. So on the drive to school Monday, I explained to Sophie that November 6 is a very important day for our country. If I had recorded our conversation, this is what it would have sounded like.

ME: Tomorrow is a very important day, Sophie. People all across the United States will vote for a president.

ME: A president is the person who is in charge of our country. He is the leader. Our current president is President Barack Obama. Tomorrow people will decide if he stays president or if another man, named Mr. Romney, will win.

SOPHIE: But I want a girl president!

ME: Me too, Sophie. But there has not been a girl president yet.

ME: I don’t know. But I hope that when you can vote, there will be a girl president. … Do you know what it means to vote?

SOPHIE: Of course I know what voting is. It’s like when someone asks you, Do you like white cheese or yellow cheese better. That’s a vote.

ME: That’s right, Sophie. And for our president, whoever gets the most votes wins the election and is the president.

SOPHIE: Did you vote?

ME: I will vote tomorrow, and I will take you with me to the voting place so you can see how it’s done.

SOPHIE: I don’t know if I want to vote.

ME: It’s very important that girls vote because girls were not always allowed to vote. Many years ago, only boys could vote.

SOPHIE: But why? That’s not fair. Boys are not the boss of girls. They are only the boss of themselves.

ME: That’s true, Sophie. Which is why girls always need to vote.

SOPHIE: Was it like that when you were a little kid?

ME: No, Sophie. It was before I was born.

SOPHIE: Well, then I will vote too. But I still want a girl be president. Not a boy.

There you have it, folks. Election rhetoric from a nearly 5-year-old.

So especially to all you women out there, get out and vote (no matter who you vote for). Because as Sophie says, “Boys are not the boss of girls.”