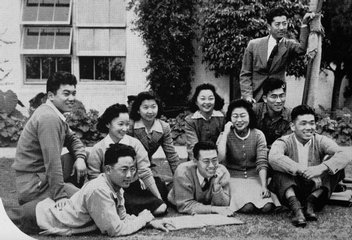 Embracing Our Collective Past: The California Nisei College Diploma Project

In February 1942, Japanese-Americans had their lives changed in an instant. President Franklin D. Roosevelt signed Executive Order 9066, which ordered the forced internment of 120,000 Japanese-Americans living in the United Sates. Those individuals were taken from their homes, forced to leave jobs and their education behind.

It’s a dark period in our nation’s history, one that is rarely discussed in history classes and text books. At least it was not when I was growing up and attending public schools. It is not spoken about much with respect to World War II. And when it is, it’s usually within the context of the attack on Pearl Harbor.

A key phrase that is often used by Jews about the Holocaust is, “Never forget.” Meaning that in order to prevent such horrific tragedies in the future, we must always remember our past, the victims, and the circumstances. Only then, will we be able to prevent such travesties from occurring in the future.

In that vein of remembrance, San Diego State University (SDSU) embarked on locating those Japanese-American students who were forced to leave their studies at SDSU to relocate to internment campus. These efforts were part of the California Nisei College Diploma Project, with the goal of finally presenting those students from California public universities and community college with an honorary bachelor’s degree.

SDSU identified 43 former students by combing through 50,000 student records. In addition, they made contact with individuals or the families of 21, and confirmed that 13 are still living. Those former students were honored this week at a special Nisei Honorary Degree Ceremony on the SDSU campus.

Two former students attended the ceremony. It was an extremely moving moment to see these two students – now in their late 80s – walking into the auditorium in their cap and gown and accepting their diploma after more than 65 years. Family members of many of the other students – including those that had passed on – attended the ceremony and accepted the diploma on their behalf.

There were two aspects of this Nisei Commencement Ceremony that really struck me. The first was the apparent lack of bitterness and tendency to forgive displayed by the Japanese-Americans. Two-thirds of the citizens sent to internments camps were American citizens, born here in the United States. Many of the men were interned and then soon drafted into the United States military while their families lingered at internment camps. These soldiers – who were part of the 442nd Regional Combat Team – went on to fight some of the bloodiest battles of World War II. So clearly, these individuals had plenty to be bitter about.

I thought a lot about my grandfather, Herbert Kahn. He was born and raised in Germany. But as a Jew in 1930s Germany, he realized that he was no longer safe in his country. At 19-years-old and by himself, my grandfather left Germany and came to the United States. When he was alive, he rarely spoke German, nor did he talk much about life in Germany. In fact, he felt strongly that his country had betrayed him. It was no longer his homeland. He even refused to buy German cars later in life. I don’t recall if he ever visited his country again. My grandfather was not an angry man. But he did always carry that distance and hurt toward the Germany that came to be.

What struck me about these Japanese-Americans who were interned was that through all the mistreatment and anger that I’m sure these individuals felt, many of them stayed here in the United States and moved beyond anger and pain. Many went on to earn bachelors, masters, and doctoral degrees. One such individual is Bob H. Suzuki., who spent more than three years in a forced internment camp in Idaho. He later became president of Cal Poly Pomona. That ability to move beyond the anger and pain is incredibly inspiring to me.

The second part of the Nisei Project that struck me took place at the actual ceremony. I sat next to a class of Japanese Studies students. Many times during the ceremony, I looked over at these students and it struck me that those Nisei individuals were their age when they were forced to abandon SDSU. Those students sitting in the auditorium would have been them. I don’t know whether any of those students had the same revelation as I did. But it certainly made me realize that life changes in an instant. And all the youth, hope and promise that those current students feel was also felt by those Japanese-American student who lost it in an instance. It was a powerful moment.

I hope the honored Nisei realize this ceremonial occasion is as important to our campus, our state, and our country, as it is to them as people. We must embrace our collective past – as embarrassing as it may be. Only then can we – as individuals and as a nation – move beyond and assure those actions do not happen again. We must never forget our pasts as we move into the future.