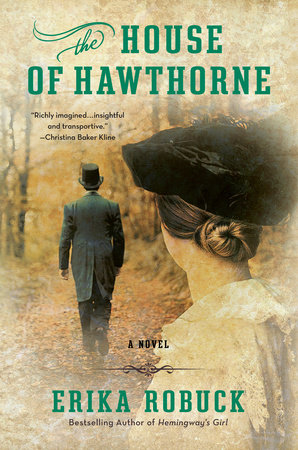 I think it’s safe to assume that every reader of American literature has read Nathaniel Hawthorne’s The Scarlet Letter at some point. I remember so clearly reading this masterpiece in my junior year high school English class. I love the story of Hester Prynne, and am still drawn to the story today. It’s fascinating how the references to the novel have continued to penetrate popular culture, movies and literature since it was published centuries ago. I think that’s the sign of a great story, for which we have an equally talented writer to thank.

I haven’t read many other of Hawthorne’s works, but I’ve always been interested in him as a writer. So I was thrilled that Erika Robuck’s latest novel, The House of Hawthorne, was a personal story about Hawthorne himself.

You may recall I’ve written about Erika and her previous books on this blog. I loved Call Me Zelda, Fallen Beauty and Hemingway’s Girl. She has an incredible knack for creating fascinating stories around these literary giants. I am so lucky that I’ve gotten to know Erika through the wonderful world of social media and blogging. So of course I jumped at the chance to read The House of Hawthorne for this blog.

I know I’ve said this before of her books, but I really think Erika’s novels just keep getting better. And this story stands out for another reason. With her other novels, Erika created a fictional character to tell the story. In The House of Hawthorne, she told the story in the voice and perspective of an actual person, Sophia Peabody Hawthorne, Nathaniel’s wife.

Here’s a look at The House of Hawthorne (from Penguin):

The unlikely marriage between Nathaniel Hawthorne, the celebrated novelist, and Sophia Peabody, the invalid artist, was a true union of passion and intellect.

Beset by crippling headaches from a young age and endowed with a talent for drawing, Sophia is discouraged by her well-known New England family from pursuing a woman’s traditional roles. But from their first meeting, Nathaniel and Sophia begin an intense romantic relationship that despite many setbacks leads to their marriage. Together, they will cross continents, raise children, and experience all the beauty and tragedy of an exceptional partnership. Sophia’s vivid journals and her masterful paintings kindle a fire in Nathaniel, inspiring his writing. But their children’s needs and the death of loved ones steal Sophia’s energy and time for her art, fueling in her a perennial tug-of-war between fulfilling her domestic duties and pursuing her own desires.

Spanning the years from the 1830s to the Civil War, and moving from Massachusetts to England, Portugal, and Italy, The House of Hawthorne explores the tension within a famous marriage of two soulful, strong-willed people, each devoted to the other but also driven by a powerful need to explore the far reaches of their creative impulses. It is the story of a forgotten woman in history, who inspired one of the greatest writers of American literature.

I highly recommend you add The House of Hawthorne to your “to be read” pile. It’s a fascinating story and really gives you an understanding of the man behind one of America’s most popular and pervasive stories. Thanks, Erika, for another amazing read!

Disclosure: I received a complimentary copy of The House of Hawthorne to review for this blog post.  All opinions are my own and I only endorse books that I am proud to recommend to others.