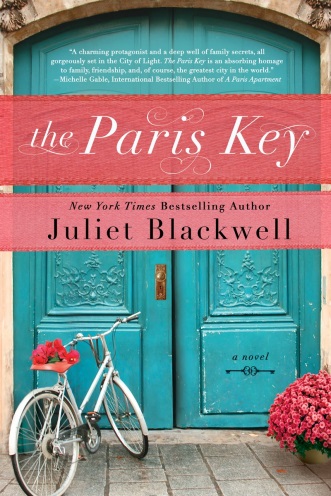 From “Paris” to “Sunshine” ~ Two Book Recommendations for You

It’s time for a few book recommendations, shall we? I’m sharing with you two very different books, but both stellar in their own right.

First up is The Paris Key, by Juliet Blackwell.

Here’s a bit of background on Juliet and her story: Author Juliet Blackwell fell in love with Paris the first time she laid eyes on the City of Lights. She first visited France as an exchange student in Spain. Since then, Juliet returned several times as a tourist and twice rented a house in the countryside for long stretches to learn the language and to write. During one of her longer stays two years ago, Juliet discovered Village Saint Paul, a “fairytale-like” neighborhood where she stumbled upon a dusty old locksmith shop. Charmed by the elderly shopkeeper who invited her to stay for tea, Juliet spent a lovely afternoon discussing the history of keys and locks. Over the course of the afternoon his granddaughter joined them and neighbors dropped in. And inspiration struck!

Juliet decided then and there that her next novel would be set in a Parisian key shop. The story is set against a lush Parisian backdrop and is about Genevieve Martin, an American woman in Paris who is faced with the incredible opportunity to take over her late uncle’s locksmith shop. Throughout the novel, Juliet beautifully describes Paris’s art, architecture, and vibrant street life in a way that will leave readers feeling like they have absorbed the sights, tastes, and culture of Paris firsthand. A touching story unfolds of a woman who must learn to open herself up to life– to new experiences and friends and love—in a city that holds secrets about her family that could change her forever.

My own opinion: I have never been to Paris. But while reading this book, I could see myself there. I love how she wrote Paris in a way that almost made it another character in the novel, and how she wove it in this beautiful story and mystery. I don’t want to give away the mystery, but it was a great read that I’d recommend if you want something that’s not too heavy but also has substance. The other book I had to share with you is My Sunshine Away, by M.O. Walsh.

This novel could not be more different from The Paris Key, but it was beautifully written and the characters were so life-like to me. Here’s the description: The story unfolds in a Baton Rouge neighborhood best known for cookouts on sweltering summer afternoons, cauldrons of spicy crawfish, and passionate football fandom. But in the summer of 1989, when 15-year-old Lindy Simpson–free spirit, track star, and belle of the block–experiences a horrible crime late one evening near her home, it becomes apparent that this idyllic stretch of Southern suburbia has a dark side, too.

M.O. Walsh brilliantly juxtaposes the enchantment of a charmed childhood with the gripping story of a violent crime, unraveling families, and consuming adolescent love. Acutely wise and deeply honest, it is an astonishing and page-turning debut about the meaning of family, the power of memory, and our ability to forgive.

My own opinion: His writing and this story reminded me of some of my favorite books by Andre Dubus III, Joyce Maynard and Myla Goldberg. The sense of place and time were written so well that I felt like a character in the novel (partly because the narrator is my age during the story’s timeline). The characters are not heroes or heroines in any sense. They are flawed and so real, which is why I felt so deeply for them. This was not the most uplifting story (that is not a criticism), and it’s certainly not a “light” read. But if you enjoy books that are very character-driven with a strong sense of place and time, I recommend My Sunshine Away.

Have you read either of these novels? What are you reading now? What do you recommend?