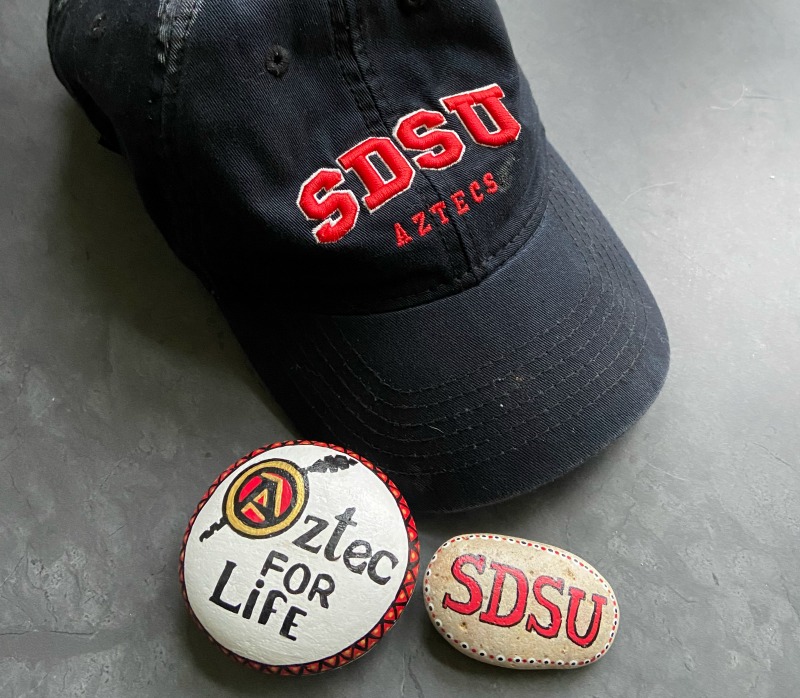 I am not a sports person. Most people who know me will tell you that words “Leah” and “sports” are far from synonymous, especially when it comes to football. It’s a shock that I know the teams in the Super Bowl (Go 49ers!). However, there’s one sport that has been somewhat woven throughout my life in various ways, and that sport is basketball.

When I was 11-years-old, my dad took me and my sister, Ellye, to see “Hoosiers” in the movie theater. My dad loves basketball; college basketball to be specific. He’s been following the San Diego State University (SDSU) Aztecs since his days working at the university, and he’s also loyal to the men’s and women’s University of Connecticut Huskies teams (dad’s a UConn alum).

Dad loved “Hoosiers” and the Cinderella story of the underdog team that came together with a broken coach and assistant coach, all of whom worked together to create something extraordinary and made that Indiana town proud. One of my favorite memories is taking my dad to the actual Hoosier Gym in Knightstown, Indiana where the movie was filmed, and watching him shoot the ball in the hoop. I remember being moved by the story of a small town that bonded over the Hickory High School basketball team. I asked dad to take me to the movie a second time. Even at age 11, I loved the beautiful scenery and wondered what it would feel like to live in a small town in the middle of America. … It’s a bit surreal to think that I sat in a movie theater watching a story about Indiana basketball 33 years ago; and today, Ellye and I, call Indiana our home. Perhaps that “Hoosiers” viewing had a deeper impact than we could have imagined.

After the “Hoosiers” viewing, Ellye went on to play basketball in the local rec league and Magic Johnson became one of her heroes. I never had the desire to play basketball, but I enjoyed watching my sister engage in something I didn’t think I was capable of doing.

I attended San Diego State and spent a good portion of my adult life working on the campus as well. Basketball season created an excitement on campus. That’s when the Aztecs soared. They dominated the season games and were regular Mountain West Conference champions. Even if you weren’t a sports fan, everyone became an Aztec for Life when the team made its way toward March Madness. The enthusiasm on campus was contagious. And I thought I was pretty cool for being Facebook friends with Kawhi Leonard when he helped take the team all the way to the March Madness in 2011. That year, SDSU played UConn in the Sweet Sixteen games of March 2011, and my dad had the opportunity to sit in the Anaheim arena and watch his two favorite teams rival each other (UConn won, 74-67).

I continue to follow my Aztecs, from 2,000 miles away in the heart of Hoosierland, wearing my red and black SDSU Aztecs baseball cap on runs. Today, the team is #4 in the nation and undefeated at 21-0. I love the collective excitement that my fellow alumni, friends and former colleagues share on social media together. We have this common bond, and it makes me proud that SDSU gave me my start in so many ways.

As I began this post, I wrote that I’m not a sports person. And that’s true in the sense that I don’t have the same passion for sports as I do for books, music, reading, TV and movies, and running. But I do appreciate the communal aspect of it, and how it bonds people together.

I’ve seen that this week after the tragic death of Kobe Bryant. Whether you are a fan of his or not, or even follow basketball, there’s no denying that the nation has come together in that shared grief. It’s a comforting feeling that helps quell the sadness a bit.

Sophie has been performing on the middle school dance team this year, and one of their obligations is to perform at the middle school home basketball games. I attend every one of those games – of course to see Sophie – but I also enjoy sitting in the bleachers watching the home team play. I like seeing so many of the new friends I’ve come to meet over my few years here in Indiana. I smile watching Sophie and her friends congregate together to chat and watch the game, and it makes me happy to see so many other students choose to spend their evening watching their middle school classmates play. It all gives me a very strong sense of community, very much like how I felt a spiritual connection sitting in the small, local Jewish synagogue.

Maybe it’s my “Hoosiers” nostalgia and that early bond I formed with my dad. Maybe it’s remembering Ellye dribbling across the rec center floor and the Magic Johnson jersey she received for her birthday one year. Maybe it’s the excitement of the Aztecs dominating college basketball this season. Or maybe it’s the fact that I found my community and home in Indiana. Either way, there’s no denying basketball has played a role in my life and I’m grateful for the memories to go with that.