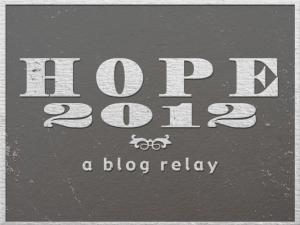 Hope for My Parenting Future

However, so I don’t just come off as a whiney and tired mom (because I am right now), I want to relate this parenting struggle post to something else. And that is the theme of hope.

You’re probably asking, “What the heck is she talking about?”

During the midst of these struggles, I was invited by Lesley at Merlin’s Garden to take place in a blogging exercise entitled Hope 2012: A Blog Relay. The idea was initiated by blogger Melanie Crutchfield. Each participant writes a post about some aspect of hope. Since I am dealing with Sophie issues, I thought I’d try to focus on the hope that comes from the struggle.

Lets start with the clothing battles. Waking up for camp this summer has been quite a challenge. Particularly when it’s come to getting dressed in the morning. Every day was the same thing: Sophie wakes up and doesn’t know what to wear. This shirt itches, she’d say. Or this dress feels a little strange, she’d mutter. The next thing I know, we are down to five minutes before departure. At that point, I am extremely frustrated because she was not dressed and we’re late to school. Before you go suggesting it, we tried laying out the outfit the night before. Nine times out of ten, said outfit was not okay in the morning.

This recently transferred over to shoes and socks last week when she spent 20 minutes (I am not exagerating – I timed it) starring at the shoe basket because she didn’t know what shoes to wear. I lost it. It was not pleasant. This is not the mother I want to be in the morning (or at all really).

Where is the hope, you ask?

Well, one night after I was dreading another morning like those described above, Sophie asked if she can wear her next-day clothes to bed.

She looked at me and calmly said, “Well if I have my clothes on when I get up in the morning, I’ll already be dressed for camp. And it will take less time to get ready.”

The kid made a compelling argument, so how could I refuse the request? And really, is wearing clothes vs. pajamas something I really care to fight over right now? Ever since then, getting dressed in the morning is a non-issue.

I have hope because we are still working on the shoe issue.

The other area that I’m really struggling with is Sophie’s new-found (but not always) disrespect toward me. I sometimes feel like crying that my own daughter is being so rude. I have tried talking to her about how her words and actions hurt my feelings. But that didn’t resonate. Last week I told her in a very loud voice that this behavior is unacceptable and had to stop. This tactic worked for a while and Sophie even found herself catching herself and rephrasing things when she was on the brink of being rude.

We had a set-back at Target this past weekend that resulted in me telling her the television was off limits for the rest of the day. I did not yell; I calmly explained that the behavior needed to stop and there is now a consequence for it. This one did resonate with Sophie. And while I hate to use punishment in that fashion, I may need to use resort to this strategy if that’s what will curb the behavior.

Again, where’s the hope in this situation? Well, to be quite honest, I’m not exactly sure. I’m still struggling and I’m sure that I’m to blame in some way for this mess.

But knowing me and Sophie – and how close we really are – I have hope that things will improve and return to normal soon.

People often use the word hope along with two other powerful words – faith and love. As I think about my current parenting struggles, I remind myself that I love Sophie beyond words. I have faith that both Sophie’s and my intentions are truly good, and we will get past this awkwardness. And I have hope that we will become an even stronger mother and daughter because of the struggles.

I now pass the Hope 2012: A Blog Relay torch onto you. What does hope mean to you?