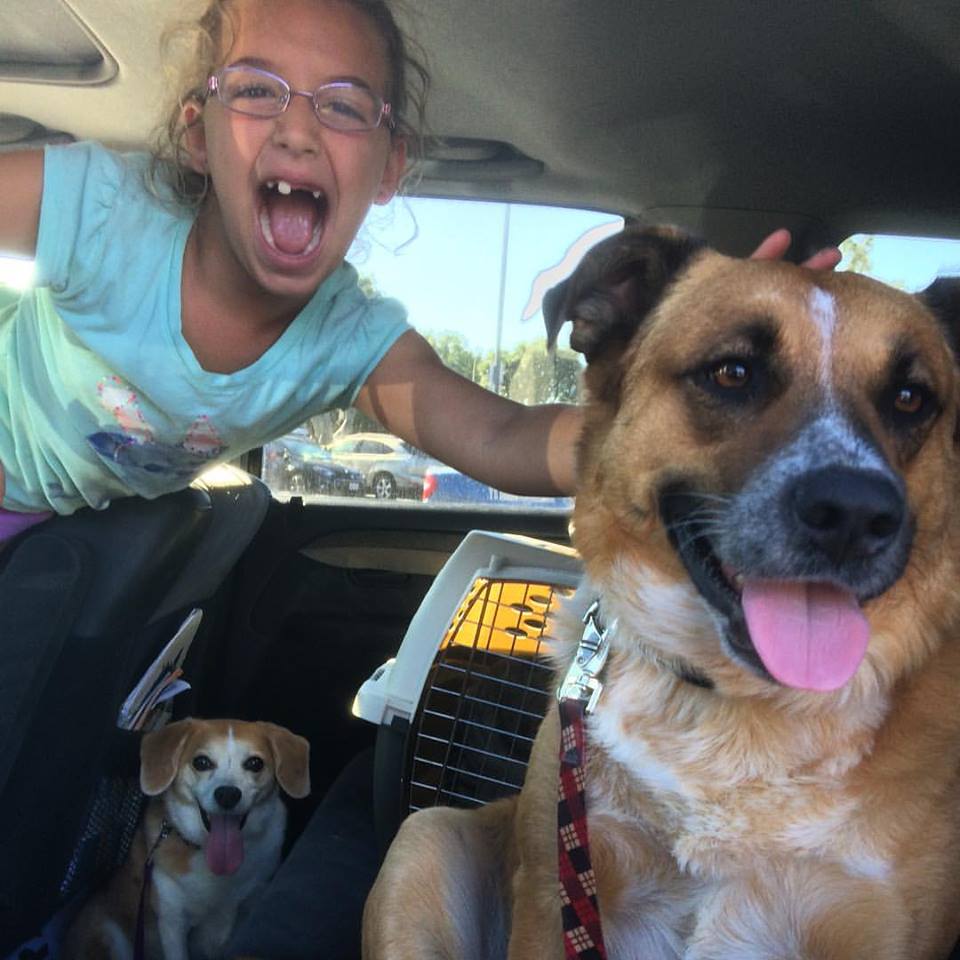 How to Road Trip With Dogs and Cats

I’m no dog whisperer. And I’m certainly not a cat queen. But I learned a thing or two this summer that I hadn’t set out to master. And that was how to drive across the country with two dogs and a cat.

As many of you know, we moved from San Diego to Terre Haute in July. Of course, the packing and saying goodbye to friends and family was stressful, but the part of it all I was most stressed about was driving my pets across country for three to four days.

Flying was not going to happen since Cody, our 3-year-old boxer/Shepard mix, was too big to fly in the cabin and there’s no way I would subject him to the baggage hold. So road trip it was!

I turned to Google and the Interwebs to see what others have done, but I didn’t find too much information that was of value. Our veterinarian was wonderful, and did give me some super helpful tips for traveling with pets, especially our cat, Tess.

In this post, I’m detailing how I prepared for the road trip, and what I learned in hopes it will help others who may need to travel across country with dogs and a cat. My vet reassured me the dogs will be pretty manageable since they are content as long as they’re with their owners. Yes, they would be nervous being away from their home; but as long as I was there, they wouldn’t be too anxious. And that’s exactly what happened with Cody and Casey.

Cats, however, are a different story. Tess would require some preparation before departure day. Our vet said we need to get Tess used to thinking her crate was the safest place in the world (a feeling she clearly did not have at the time). To do this, here’s what he said to do:

1. About one to two weeks before the departure date, start Operation Move the Cat. Place the crate about a foot behind the cat’s food bowl. About twice a day, spray a dose of Feliway, a soothing cat pheromone, in the crate. The spray is designed to soothe cats and reduce stress. 2. Each day after the first, I would move the food bowl a little bit closer to the crate. And I’d continue to spray the Feliway in the crate. He also suggested spraying it around the cat’s liter box and in the car.

3. Once the bowl is directly in front of the crate, start moving the food bowl into the crate with the goal to eventually have it at the back of the crate. This would force Tess into the crate to eat, but she’s feel comfortable doing so.

I was skeptical about the process. Tess is a pretty smart cat who NOT a fan of the crate. I was sure she’d see right through this plan and go on a hunger strike to protest. But you know what? IT WORKED! The day before the big day, I filled our Honda CRV with the dog’s leashes, dozens of plastic bags, our large plastic bin of dog food, bag of cat food, container of dog treats, many bottles of water, their food and water bowls, and the liter box (packed the morning we left). I tried to keep things consistent, bringing their regular food and same bowls. I also packed in the car a blanket we used on the bed so they had something with the smell of home.

The dogs hopped right in the car, thinking they were just going on another car ride. Tess did meow and tried to scratch out of the crate every time we started up each day. But she calmed down fairly quickly and seemed soothed by the dogs’ presence. The three of them had the entire back seat since Sophie wanted nothing to do with the “dog car” and elected to ride with the kids in the other car. We typically started the day around 8 a.m. and drove for about four hours. I took the dogs out on their leash and let them stretch their legs. I offered the dogs water at each stop. I tried offering water to Tess, but she wasn’t interested. In Tuscon, Arizona, we actually found a dog park, which was fun for about 15 minutes, until the 103-degree heat forced everyone back in the car. And then four to five hours later, we’d stop again for potty breaks and water.

The hardest part of driving across country with dogs and a cat was a lack of restaurants that had any type of outdoor seating. And since it was late July in Arizona, New Mexico and Texas, it was way too hot to leave the animals in the car.

While I didn’t expect the pit stops to be like the trendy SoCal spots that welcomed dogs like children, I was surprised at the lack options for people traveling with pets. We were on interstate highways, and surely not the first to be making cross-country trips with dogs.

But we made do, and I was extremely grateful to my friend, Jessica, who helped me with pet duty. We’d take turns eating inside, and the other would sit in the air-conditioned car with the fur kids. At night we stayed in La Quinta hotels, which are pet friendly. Everyone seemed to enjoy their hotel stay. I was a little worried about letting Tess out of her crate for fear she would find a place to hide and I’d never be able to get her back into the crate. But she was amazing! She came out of the crate, used her liter box, ate her food, sipped some water, and slept on the bed with me, Sophie, Casey and Cody, just like at home.

And then the next day, we did it all over again.

We spent four days on the road before arriving at our new house in Terre Haute. The vet said it would take the pets about two weeks to feel like they’re in their home again. That happened much faster once our furniture arrived.

So there you have it: how I made a road trip from California to Indiana with two dogs and a cat. I can’t say I’d want to do it all again. But in hindsight, it really wasn’t bad at all. And those long stretches where I was driving with Casey, Cody and Tess, accompanied by my music, were actually quite peaceful.

Thanks for reading this long post, which was likely either super helpful to you, or really boring. Have you ever driven across country with pets?