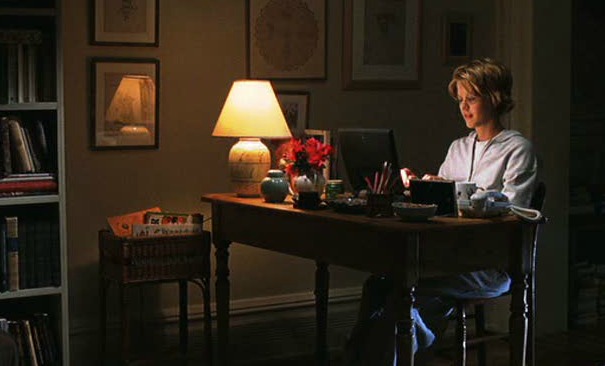 I Feel Bad About Nora Ephron

Like so many people, I was saddened to hear the news that writer and director Nora Ephron passed away this week. Not only is her death a loss to the written word, it’s also a loss to women everywhere who aspire to use words to tell stories, make people laugh, and turn dark moments into lighter ones.

Those of you not familiar with the name Nora Ephron are almost certainly familiar with her work. She was the scribe behind such romantic comedies as When Harry met Sally, Sleepless in Seattle, You’ve Got Mail, and most recently, Julie & Julia. These are some of my favorites movies that I have been known to watch over and over again (much to Bryan’s chagrin). But I can’t help it — every time I see Tom Hanks and Meg Ryan almost coming together on that Seattle street, I am hooked.

While some argue that these movies are “chick flicks” – and yes, I can see that — if you listen closely to all of Nora’s female protagonists, they are strong women with the brain and will to make something happen. I can’t help but think Nora was instilling her feminist beliefs in her characters, which is why her female protagonists were so relatable and a joy for us women to watch.

Nora paved the way for all of us female writers and bloggers. She started her career as a journalist, wrote personal essays and memoirs, blogged and considered herself a foodie. Is this all sounding familiar? I can imagine that many of us writers envisioned ourselves penning a screenplay a la Nora Eprhon-style.

If we step back and look at her amazing writing, dialogue and words, chances are we’ve all been inspired by Nora in one way or another. Most recently I found myself identifying with the Kathleen Kelly character in You’ve Got Mail. There’s an early scene in the movie where she says the following as she contemplates her life.

Sometimes I wonder about my life. I lead a small life – well, valuable, but small – and sometimes I wonder, do I do it because I like it, or because I haven’t been brave? So much of what I see reminds me of something I read in a book, when shouldn’t it be the other way around?

Although I’d seen Mail countless times before, this time, it was my voice I heard as Kathleen uttered those lines. This same sentiment went through my head every day as I struggled with the decision to leave my full-time, stable job for the freelance career I have now. Like Kathleen, I wanted to be brave.

Finally, I’m saddened because I feel the world has lost a great writer. And as someone who personally uses words to improve my own life, I’m sad that a great voice like Nora Ephron’s will no longer be heard through new dialogue and books.

So to honor Nora’s memory, this weekend I will watch When Harry Met Sally, Sleepless in Seattle, and You’ve Got Mail. I’ll have my own tribute to Nora Ephron … even if it means my husband will roll his eyes when he, once again, hears the AOL-bot say, “You’ve got mail.”

Oh well, he can learn to live with it!