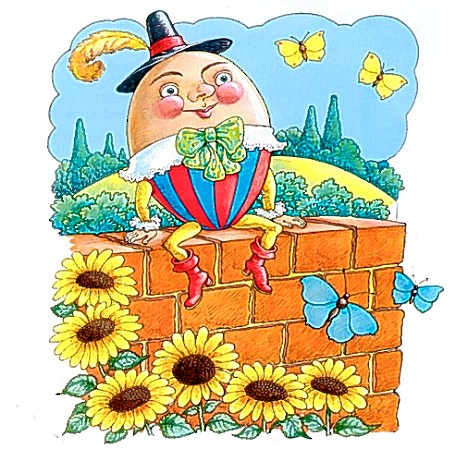 One book Sophie enjoys reading each night is a compilation of classic nursery rhymes. Reading these rhymes has been an eye-opening experience. For one, I never before realized what a bad parent Old Mother Hubbard really was (giving her kids broth without bread before whipping them!).

But aside from my need to censor a few of Mother Goose’s rhymes, what I found fascinating was how many components of these stories exist in modern pop culture songs and literature.

Let’s start with Humpty Dumpty and the famous line:

All the king’s horses and all the kings men couldn’t put Humpty together again.

As I read these words now, I can’t help but think of Robert Penn Warren’s famous political novel, All the King’s Men.

And if you’re a Mary Chapin Carpenter fan (yes, that would be me), you’ll recall hearing that same line in the song Closer and Closer Apart (The Calling album):

The last line of Mary Mary Quite Contrary reads:

With silver bells and cockle shells, and pretty maids all in a row.

Interestingly enough, The Eagles use those words – “Pretty Maids All in a Row” – as the title of one of their songs (When Hell Freezes Over album).

Now just when I thought nursery rhymes and Mother Goose have been inspiring art for years, I stumbled upon my PBS Parents Newsletter with a story entitled, “The Surprising Meaning and Benefits of Nursery Rhymes.” I was intrigued, especially considering this post was nearly complete.

I’m not going to summarize the entire article since I highly recommend reading it yourself. But what I found fascinating in this article is that many scholars believe those nursery rhymes were not written for children. In fact they were political and societal commentaries written in a “civilized manner” in rhyme and song.

Humpty Dumpty may be telling the story of the 1648 Siege of Colchester during the English Civil War, when the king’s army set up a powerful cannon that broke into pieces.

And Ring Around the Rosy may have been a reference to the plague (the “ring around the rosy” may be the swollen cysts symptoms of the sick, and the “we all fall down” refrain a reference to death.) Freaky, I know!

So now we see nursery rhymes have truly come full circle. They were verses that were inspired by actual events. And those writings eventually inspired so many other pieces of art, song and literature. Talk about rhyme and reason!

I do have to wonder though if Mother Goose receives royalty payments. That would be one well-paid bird!