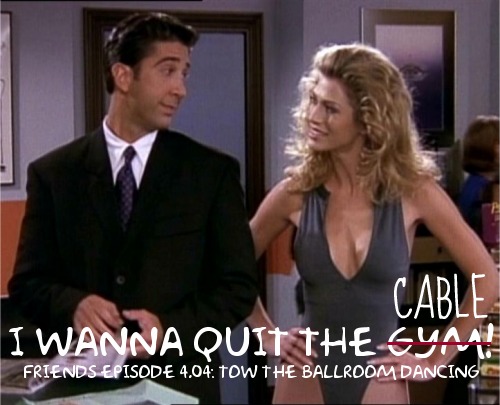 I Wanna Quit the Cable

Do you remember that episode of Friends where Chandler and Ross were desperate to quit the gym? “I wanna quit the gym!” was all they could muster. Yet at every turn, the gym would entice them with some new offer or good-looking salesperson to keep them as customers.

Well, this is how I feel about my relationship with cable.

When Bryan and I looked to cut expenses from our budget, we turned to the “not quite necessities” section of our expenditures. Ah yes, cable, was a big one. Even though we only have one non-HD television, that silver screen came with the following expenses: DVR service, HBO, Showtime, 500+ channels (most of which I’ve never even watched), Pay-Per-View, and Music On-Demand. Mind you, I don’t even remember signing up for all this stuff!

HBO was the first to go. Curb Your Enthusiasm could be viewed at my parent’s house, we reasoned. Next it was Showtime. Although the Time Warner rep was quick to point out that we were getting Showtime for free, so why on earth would I want to give it up? Perhaps because you’ll stick us with a Showtime bill at some point in the future, I thought. So we said farewell to another premium channel.

But still, the cable bill was quite high for a small family of three. And we hardly watch television! Honestly, as long as I have the DVR, Fox for House, NBC, and PBS Kids for Sophie, we’re pretty set as far as cable goes.

So I recently called up my friends at Time Warner Cable and told them I want to cut back. We don’t need to pay for all these channels, I said. Cut the Encore channels, I said. The Mystery, Love Story, and Indie channel can all go (gulp!). Even On-Demand can go away.

The very nice gal on the other end of the line is typing fast and furiously, seeing what she can do to help. I’m waiting with batted breath to see how much less I’ll be paying each month. And then, she says…

It looks like if we cut all the channels and you go down to basic cable, it’s going to cost you more than it does now.

I wanna quit the cable!

Well, the Time Warner rep – as nice as she was – didn’t have much more to offer me unless I wanted to dump the phone service and internet connection. And those are necessities – can’t quit them.

There’s nothing? I asked. There are no hidden costs that can be trimmed? Nope.

So I thank Time Warner lady for her time and hang up the phone, somewhat discouraged, and back to the expense-cutting drawing board.

It’s a crazy world we live in. Who would have thought we’d end up paying more for downsizing? To be punished for trying to conserve.

I wanna quit the cable!

I guess it’s a good thing I was able to save $40 a month by successfully quitting the gym!