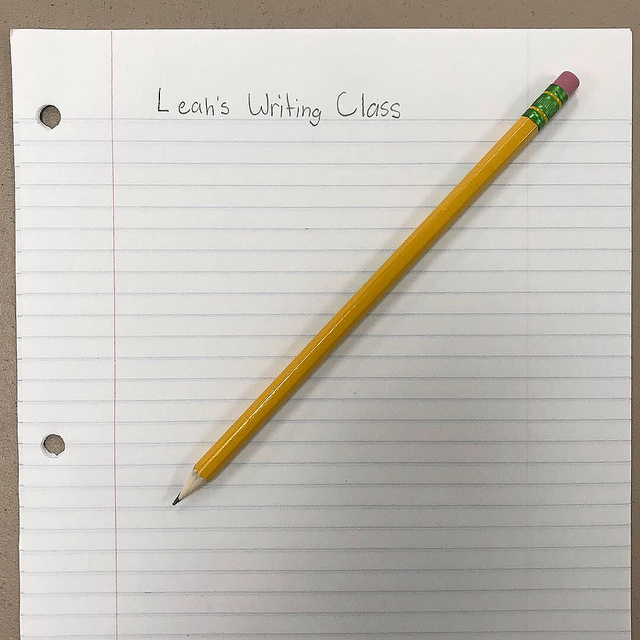 Receiving and Giving the Key to Unlocking the Door to Writing

When I was in the third grade, my teacher gave us a creative writing assignment. It was the month of December and we had to write a story about Christmas. That was the only prompt I can recall, 35 years after the fact. Although I do remember Mrs. Simmons, my older, red-haired teacher with a creaky voice, saying that if we wrote more than one page, we could earn extra credit in the form of a candy. Being the candy junkie I was (still am), that was all the motivation I needed to get writing.

I hand-wrote five pages of a story that described a girl who hated Christmas. I was most likely inspired by my own mixed emotions for the holiday that was never allowed to be mine since I grew up in a Jewish home. I wish I could remember more details of that story, but unfortunately the only thing I recall was that the character referred to the holiday only as Xmas.

A few days later, my classmates and I were gathered on the rug and Mrs. Simmons asked me to stand up and read my story aloud. As a self-described wallflower, I was sickened at the prospect of doing this. Even writing this recollection today, I’m getting that awful feeling in my stomach, as if I’m transported back to third grade to read aloud. But because I was a good girl who never questioned authority (or anything for that matter), I stood up and read my story. I remember purposefully mumbling the word “Xmas,” for fear I’d offend my fellow classmates with such a “derogatory” word.

After I finished, Mrs. Simmons told me to take a bunch of candy (yes!) and told me – in front of the class – that I was a good writer. She praised my story, calling it creative and recognized how much effort I put into writing it. I was 8-years-old and that was the first time someone acknowledged me as a writer. While I remember very little details about that story, I recall Mrs. Simmons’ comments and how they made me feel, to this day. I felt excitement, pride and, for the first time, had the sense that the words I put on paper were worthy of reading.

Mrs. Simmons gave me two important gifts. The first was a safe place for me to write and share that writing with others. While I may have been terribly uncomfortable to speak in front of my classmates, I felt secure enough to take the risk and read my words aloud. The second gift was a key. And that key unlocked the door to the world of writing and how it would eventually transform my life.

Ever since the third grade Christmas story experience, I started to think I wanted to be a writer when I grew up. I always enjoyed writing and books were like the friends I never had. I spent countless hours in my room — reading, writing stories, listening to music, playing school, and creating a life for myself that I didn’t have outside my childhood bedroom. As I got older, I wanted to write articles for the magazines I was constantly reading. Surely “Seventeen,” “Sassy,” “Teen” and my favorite, “Dynamite,” would welcome me as a writer to their team. I imagined that perhaps I would write books one day.

My journey with words evolved over the years, eventually taking me to writing for the high school newspaper, majoring in journalism in college and writing for the college paper, starting a blog, and then later making a career for myself as a freelance writer.

I recently taught a group of kids, ages 8 – 12, creative writing at the local public library in Terre Haute. The writing class, which was free to kids, is one of the only opportunities some young people have to be able to practice writing and see themselves as writers. This is especially true in rural communities and small towns, much like Terre Haute, where libraries are one of the few places to access the outside world.

Many of the kids have been writing fiction stories in their own time, and they wanted to use the class to write about their characters. For others, this was the first time they were given an opportunity to write creatively outside their structured elementary school classroom.

Within the first ten minutes of class, I realized I was in the midst of real writing talent. We started the class with a simple “I remember …” exercise. This is the same prompt I use with my adult writing classes. You write the words “I remember” and then keep writing to see where your brain takes you. I told the kids they could write from their own memories, write from their character’s perspective, or make something up completely fictional. The only “rule” is you have to keep the pencil moving.

I love this prompt because you can use it hundreds of times and you’ll always write something different. My favorite comments come from students who tell me they are shocked at what came out on the page, or that they didn’t think they had those ideas in their head. The looks of amazement and pride on the kids’ young faces were priceless!

For the next exercise, the kids chose a photo from dozens of images I brought with me to class. They were asked to find a photo that resonated with them on some level, and then for 10 minutes, write a short story about the photo. The students had the option of sharing what they wrote with the group. One young girl said she loved that she was unrestricted to write about anything, and that made the writing easier. Another student wrote a scene for her story using the photo prompt, and others wrote completely different stories that just tumbled out onto the paper. It was a beautiful thing to witness.

To say I was astonished by the creativity and talent among this group of kids would be an understatement. I loved seeing what came out of their minds and onto the paper. I loved hearing the amazement in their voices when they realized what they’d just written. I loved seeing the pride and joy on their faces when they realized they could accomplish something they didn’t think of themselves capable of doing. One student asked me to read a story she wrote and send her feedback. I can’t even describe how happy this made me. As much as these kids were inspired to write their own words, they equally inspired me.

Most of these kids are not much older than I was when I was given the key to unlock my writing potential. Teaching this writing class brought me back to the girl I was in third grade and how just one act of writing a story – and one teacher’s comments –changed the course of my life. Now as an adult, and in partnership with the community library, I was able to create a safe place to help nurture young writers. Just like Mrs. Simmons gave me that key 35 years ago, I was grateful to pass it along to these kids so they can unlock their own doors to a lifetime of words.