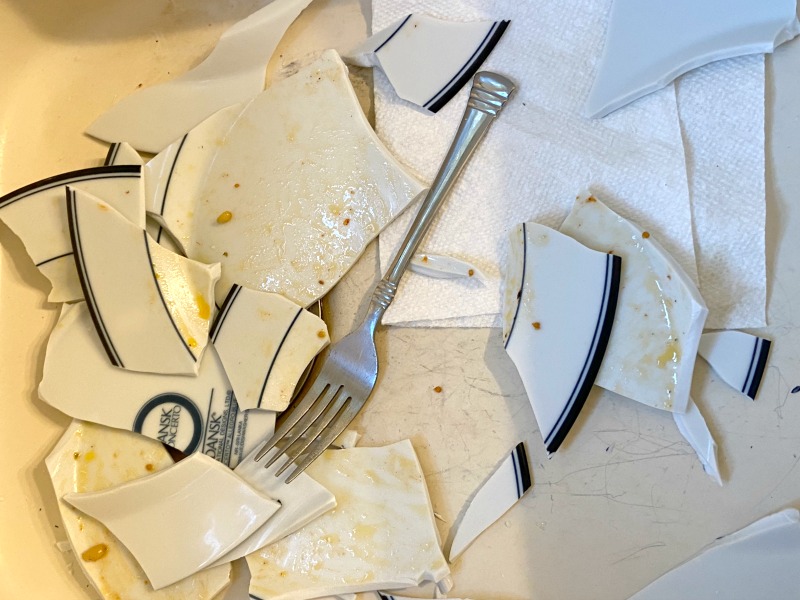 Learning to Dance with Anger

This photo of a shattered dinner plate in my sink … this is anger.

Last week, Sophie and I got into an argument that left me extremely frustrated. I won’t go into the specifics of why we disagreed. Just know it was not a life-shattering situation, and we worked through the issue and moved on. After she stormed off, I went into the kitchen to clear my dinner plate, threw it in the sink and watched it shatter. I stared at it for several minutes, and then walked outside and sat on my patio as the sun set and I felt my body calm down.

That argument was really just the tip of the iceberg for me, as I’d already been feeling angry about several things during the days leading up to our confrontation. But if I’m being honest, it felt really good to throw that plate and physically release my frustrations. I almost felt like that by releasing it, the anger started to disappear from my body.

For nearly all my life, I didn’t get angry. Of course I felt anger, but I kept those emotions bottled up inside me and tried to process them internally, making myself be the recipient of the emotion. I didn’t outwardly express it or tell people when I should have. That’s not a healthy way to live.

There are many reasons I suppressed my anger, but it ultimately came down to fear. I was afraid to get angry, to stand up for myself, or tell people (family members and friends) that I felt hurt by something they said. Why was I afraid? I feared loss of the relationships and abandonment. I feared someone getting angry at me, and in return, mentally shutting me out because of the feelings I expressed. I thought my feelings were not as important and worthy as others. And I didn’t want to hurt anyone, or have my words cause them harm.

Since last year, anger is an emotion I’ve felt more intensely and more regularly. I’m sure it stemmed from the ending of my marriage and all I carried with me until that point. This is not to say I blame my ex-husband or my marriage ending for my feelings of anger. But it’s as if once I faced that deep fear with respect to anger, I realized I could survive the aftermath. As such, I felt safer feeling anger and dealing with it.

When I started seeing my therapist earlier this year, I told her I wanted to express anger and frustrations in a productive way without a PTSD fear of the reactions and consequences. I didn’t want to hold it all in anymore. I had to start standing up for myself. My therapist said (and I’ve read a lot to echo this) that anger is a secondary emotion, meaning there’s usually another feeling behind the agitation (e.g. sadness, shame, jealousy, fear, love). That helped me understand where a lot of my feelings came from and how I can navigate them.

I’ve noticed that, for me, anger is often mixed with anxiety and it tends to be a precursor to feeling down or depressed. This also goes back to anger being a secondary emotion; that there tends to be other triggers for the feeling. I’ve come up with a few ways that I now deal with anger; sometimes they help and other times they do not.

First (and the hardest to learn), I verbalize my feelings when the situation warrants it. In January, a friend said one of her goals for the year is to have a greater acceptance of people and situations. I am very much a person who believes in the mantra that you can’t change others; only your response to them. And in most cases, I’m willing to accept people for who they are, even if that means they come with quirky behaviors or habits I wouldn’t personally embrace. That being said, there’s a fine line between acceptance of a person, and accepting a person’s behaviors that may not be okay.

Today, if a person says something that hurts or angers me, I don’t just let it go anymore. I’m not one of those annoying people that points out every agitation. But if I’m hurt or frustrated by someone, and it’s a relationship that means something to me, I will stand up for myself. This is HUGE for me, as it’s not something I would have done even six months ago.

People’s reactions to this have varied. Some have shocked me in their acceptance and unconditional care for me, what I say and feel (I’m still confused by this at times). And others have shown there are clearly conditions on our relationship. But both reactions confirm one thing: I can survive the aftermath of expressing my anger and my feelings are valid.

Second, when I find myself agitated and angry, I write down everything that’s heavy on my mind. The writing and brain dump helps. It doesn’t always make the mood change, but it helps with awareness and perspective.

Third, I try to physically get out of my head. I go outside, like I did after last week’s dish incident. I run; however, when I’m in a mental/physical place where the running is frustrating me, that can sometimes add to the anxiety. This has been my reality lately. It’s really difficult to go from something that I’m used to being a salve to being a frustration. I’m still working through how to deal with it.

Fourth, I talk and share. I don’t like to complain, but if I’m feeling angry or agitated, I’ll text my sister or vent to a friend whom I know will just listen and empathize. I have a therapist. And I have online social support writing groups that allow me to share my feelings without judgment.

Anger is such a interesting concept. I think society has conditioned us to not feel and express anger. I myself am guilty of that, and I find myself saying “Calm down” to Sophie when she gets frustrated. But I think it’s powerful to be able to feel and embrace anger, express it if need be, and then move on.

Whatever I do, I don’t want to sit with anger and have it envelop me. I’ve seen what that does to people and I won’t do it to myself (and I will not surround myself with people who do). I came across this quote recently that resonated:

“People who stay sick choose to keep blaming. They stand firmly in their anger and resentment and call it a revolution. They don’t see that humility is not an admission of weakness but a result of knowing exactly how powerful you are. It’s much easier to go down the path of self-righteousness, to be sure. Nothing is more gratifying. I fall into it regularly. But those who choose the other way? They get better. They get free. They soar, with soft dignity. They rise, without needing to announce it.” — Laura McKowen

I don’t plan to continue throwing plates, especially since new dishes are not in the budget. But I want to feel the anger – to express it – and then I want to let it go. Ultimately, I want to be free. I want to soar.