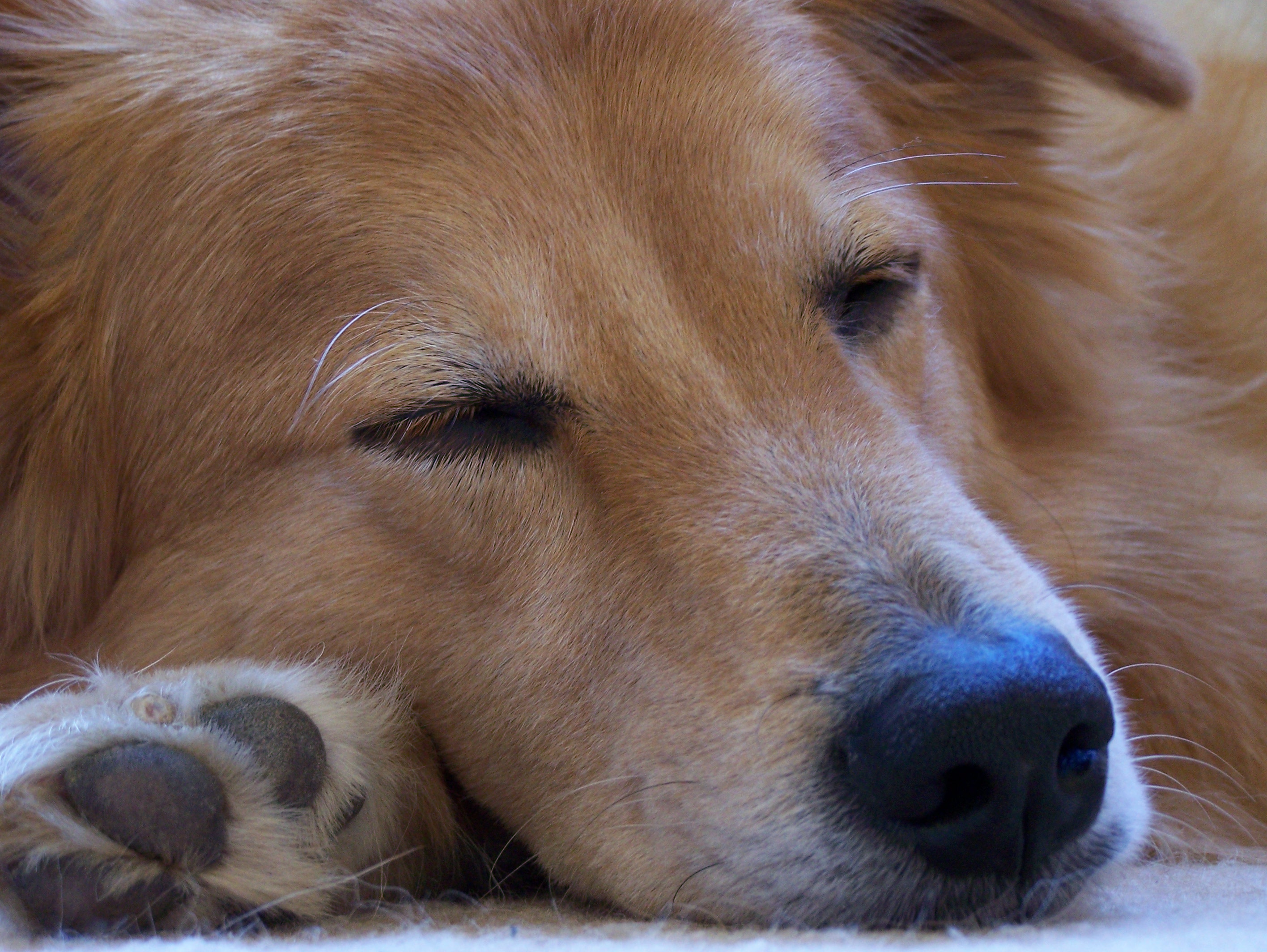 I recently finished reading the amazing book, The Story of Edgar Sawtelle by David Wrobelewski. Never have I read something so well-crafted, so beautifully written, so vivid, and with such an incredible story. It’s the type of book that stays with you for weeks afterwards, and is one of the very few books I would read again.

Of course I started thinking so much more about my own dogs (my other children), Casey and Romeo. So, in honor of my dogs and Edgar Sawtelle, here’s Romeo’s story.

Romeo is our 10-year-old spry lad. We believe him to be a mix of golden retriever and sheltie (Shetland sheepdog, collie family). His golden retriever qualities are his golden coloring, strong need for companionship, and general happiness just being around his people. He will also bring us an “offering” of a toy or object (e.g. Sophie’s slipper) when we come home. He does retrieve when you throw the ball, but he certainly doesn’t live for it either. At 55 pounds, Romeo is too small for a full bred golden retriever. Given his size, shape of his snout, and other traits, we’ve deduced that sheltie his is other half. He is not a herding dog, but likes to work and have a job to do.

We adopted Romeo from the San Diego Humane Society about four years ago. We were having so much fun with our Casey puppy that we thought, Why not another one? (Probably the same sentiment that often leads to a second child.) We also wanted a friend for Casey as I felt so bad leaving her alone all day for 8 – 10 hours each day.

We’d been looking at dogs at various local humane societies and rescues when one day, we came across Romoe’s photo on the San Diego Humane Society’s Web page. We were instantly intrigued and drove down to meet the cute golden dog. Casey, at the time, was still a rambunctious puppy and not very affectionate. So we wanted an affectionate dog, one that would curl up next to us on the couch. (Little did we know we’d get a bit more than we bargained for with that personality trait.) Our test for getting Romeo was that if he was affectionate toward us when we greeted him and got along with Casey, we’d bring him home. Romeo passed the test and we brought him home the next day.

Romeo came from a family with kids, and when they all flew the coop the family moved into a smaller apartment. Thus deciding to give Romeo up for adoption. I cannot imagine giving this sweet dog away. Yes, he does have his idiosyncrasies and can be quite needy at time. But he is such a good-natured dog. And since Romeo is so bonded with his people, I can only imagine how sad he must have been to be given up. It brings tears to my eyes to think about.

Romeo is happiest when someone is petting him, walking him, or if he’s riding in the car. His face lights up when you say the word “walk” or “car ride.” He jumps with joy even if we only drive a few short miles to the local Starbucks drive-through. He loves to be a companion and is perfectly happy just sitting outside with Bryan as he’s doing yard work. He’s also a very smart dog and takes to learning most commands very well.

He’s been a great companion for Casey and has never had any problems being the lowest on the totem pole. Since the day we brought him home, the two of them have played together. They share each other’s food, often switching food and water bowls with each other. Apparently the kibble is “greener” on the other side as well. I love watching them play, which usually consists of Romeo barking and chasing Casey in circles around the downstairs. He’s also taken on one of Casey’s beagle traits. When we come home, Casey howls as the hound bread will do. Romeo also howls when we come home. He’s the only retriever/sheltie I know of that howls like a hound. The two of them also take their lizard-hunting very seriously. Not so fun for those lizards though.

Romeo adjusted so well when Sophie entered the mix. He is so patient with her, allowing Sophie to cover him with blankets, feed him with her play dishes, and pull “clumpies” (clumps of hair) of his coat. And he never begs Sophie for food (not something I can say about Casey).

This golden boy does, however, have some annoying qualities. First one is the constant need to be touched. Anytime he sees us or hears his name, he comes right over and will signal us to pet him by gently hitting us with his paw or nudging us with his chin. It’s endearing at first, but Romeo never lets up. In fact, he seems nervous when getting touched because I think he constantly fears the touching will stop. Luckily, he does respond to the command of, “Go lie down” when you’re done petting. And he trots off to lie down, looking sad, of course.

Romeo also likes his routine. So much so that if you vary from the routine, he tends to get nervous and paces back and fourth. This is where his Sheltie tendencies probably come through. He has trouble relaxing unless he is really tired from a walk or activity.

One of my nicknames for Romeo is “Cowardly Lion” because of his fears of small things. Large boxes, vacuums, and my cell phone text message alert cause him to run with his tail between his legs into another room. Fireworks and smoke alarms are also quite scary to this guy. And forget watching any type of medical show as the beep of a pager or heart monitor sends him fleeing. Needless to say, he’s not a fan of “House” in the same way we are.

When it comes to walking Romeo, this is where the phrase “You can’t teach an old dog new tricks,” rings true. Romeo wants to lead the walk and be at the end of the leash in front of the pack. And because he’s a male dog, he will dart back and fourth in order to mark any territory he sees. Bryan and I believe the owner should lead, not the dog. So Romeo needs to be constantly kept on a short leash and I always position him on the outer side of the sidewalk so he cannot mark everything. We’ve been walking Romeo for four years now, and his desire to lead will not change.

There have been a few experiences that made me look at Romeo as more of a protector of our family. The first was when Sophie and I were taking Romeo and Casey for a stroll around the neighborhood, a somewhat frequently activity. Suddenly a large pit bull dog that lives near us began charging toward all of us without a leash on! I was trying to stay calm so I would not scare Sophie, but I was freaked out at the same time. The dog looked at all of us, but Romeo was the one who barked at him, almost trying to get his attention. Romeo and the pit bull started fighting and barking at each other. Luckily there was no biting or bloodshed. Eventually the owner heard my screams and got his dog.

I was shaking, Casey was hiding, and Sophie was crying. But Romeo was staring straight ahead and he did not flinch. We walked the rest of the way home and for this time, I let Romeo lead us. Ironically, walking home after the pit bull incident was the best he’d done on a leash. He walked straight ahead and didn’t try to veer off. He was not scared a bit. Maybe he felt that he finally had a purpose or job, to protect the family. I really believe he was putting himself in front of us.

Romeo’s protective qualities also came through when a neighborhood shepherd dog broke free from its home and ran around the street, probably just trying to aggravate the local dogs. This is a somewhat frequent occurrence with this shepherd. The loose shepherd causes sheer panic from Casey who loudly makes sure we all know the dog is roaming free. The last time it happened, Sophie was sound asleep in her bed. I noticed Romeo lying in front of Sophie’s bedroom door. I opened the door to her room and Romeo walked right over to Sophie’s bed, gave her a sniff to make sure she was okay, and then turned around.

There is a passage in The Story of Edgar Sawtelle that reminds me of Romeo. In the following scene, the author describes Almondine, the main dog character, and her realization that she will become the voice and companion for Edgar, who was born mute.

While Almondine pondered this, a sound reached her ears—a whispery rasp, barely audible, even to her. At first she couldn’t make sense of it. The moment she’d walked into the room, she’d heard the breaths coming from the blanket … And so it took her a moment to understand that in this new sound she was hearing distress to realize that this near silence was the sound of him wailing. She waited for the sound to stop, but it went on and on as quiet as the rustle of the new leaves on the apple trees.

The baby had no voice. It couldn’t make a sound … Almondine began to pant. She shifted her weight from one hip to the other and as she looked on and saw his mother continue to sleep. She finally understood that her time for training was over and now at last she had a job to do.

This passage brought tears to my eyes. In many ways, Almondine’s realization reminded me so much of Romeo, ready and waiting to do his job and protect the family.

For being an older dog, Romeo still has so much energy and has not had any health problems (knock on wood). I think he’ll continue to lead a long and happy life. That is, as long as we keep petting him and giving him the love he needs and deserves.

Thank you, Romeo, for being our protector and our friend!