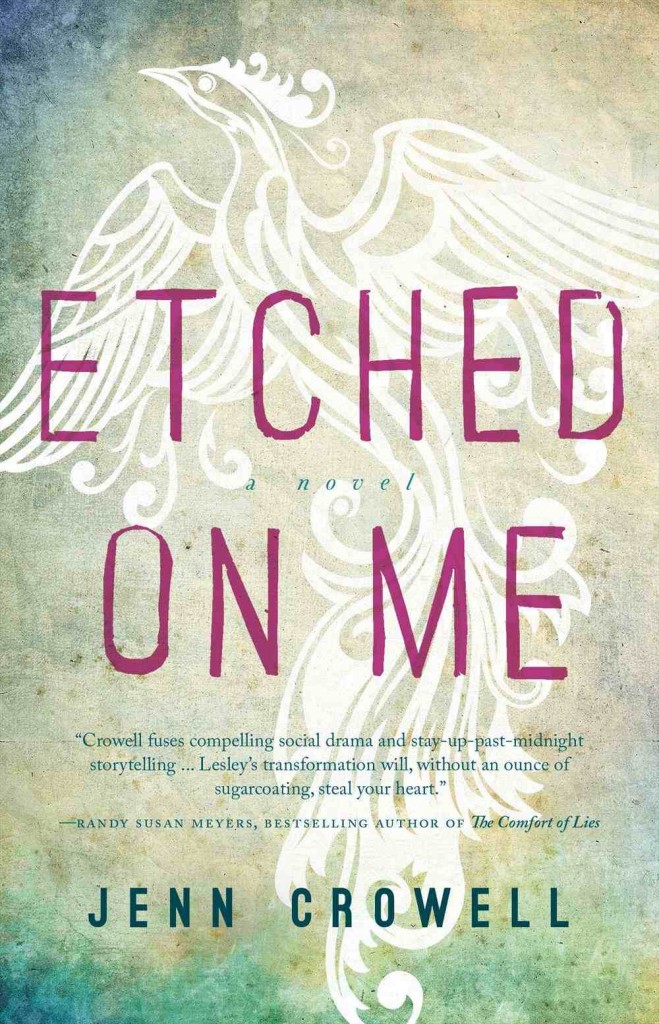 Congratulations to Melissa Crytzer Fry for winning a copy of ETCHED ON ME!

I am excited to welcome Jenn Crowell to the blog today. Her latest novel, Etched on Me, had me on the edge of my seat and I could not stop until I finished the story.

Etched on Me tells the story of Lesley Holloway, a 16-year-old girl who ran away from home after spending years enduring sexual abuse by her father. Although she is doing her best to survive and ends up in a prestigious London prep school, few people know that she’s secretly cutting herself as a coping mechanism … until the day she goes too far and ends up in the hospital. Lesley spends the next two years in and out of psychiatric facilities, where she overcomes her traumatic memories and finds the support of a surrogate family.

Eventually completing university and earning her degree, she is a social services success story. You would think the story would end there. But nope! Lesley finds herself unexpectedly pregnant in her early twenties. And despite the overwhelming odds she has overcome, the same team that saved her as an adolescent will now question whether Lesley is fit to be a mother.

After I finished Etched on Me, I had so many questions for author Jenn Crowell. She was nice enough to take the time to answer a few of them for us today.

1. What inspired you to write Etched on Me? You mention in the book jacket a girl by the name of Fran Lyon; what does she have to do with this story?
I had originally intended the book to be solely about (two of the book’s characters) Gloria and Jascha’s relationship and their adoption from Russia. But in 2007, I read a UK news article about Fran Lyon, and that all changed.

Fran was a 22-year-old young woman, very bright and successful, who’d overcome a past history of sexual abuse and self-harm as a teenager. Now happily pregnant, she faced the removal of her baby into foster care at birth, even though her treating psychiatrist had given her a clean bill of mental health, because social services didn’t trust her to parent.

As a new mother and recovered self-harmer myself, I was shocked by this story and knew that I just had to write a similar fictionalized account of a young pregnant woman’s struggle.

2. How has being a mother affected your writing?
I think Joyce Maynard described it best when she said that, since becoming a mother, she had “much more important things to say and much less time in which to say them.” I can definitely vouch for that statement!

Motherhood has made me a far more passionate and mindful writer – I’m much more conscientious about what I’m putting out into the world and whether it’s full of enough beauty and utility to justify its existence.

3. What do you hope readers will take away from Etched on Me?
Two related things: a greater awareness of the very real discrimination that mothers with mental illness face, and the ability to put a human and relatable face on those women – whom it’s so easy to marginalize and dismiss as just “crazy” others – thanks to taking the emotional journey with Lesley.

4. What are some of your favorite books and the authors that inspire you?
Margaret Atwood is my literary heroine; reading The Handmaid’s Tale at the age of fourteen was an absolute revelation in terms of my growth as a writer. A few others I love: Kazuo Ishiguro, Amy Bloom, and Clare Allan. I’m a serious sucker for YA dystopian novels, too.

GIVEAWAY: I have one copy of Etched on Me to give to one lucky reader. To be entered to win, leave a comment telling me what you’re currently reading or what book you recommend I read next. The giveaway closes Friday, February 7 at 5 pm Pacific time.

Disclosure: I received a complimentary copy of Etched on Me to review for this blog post.  All opinions are my own and I only endorse books that I am proud to recommend to others.