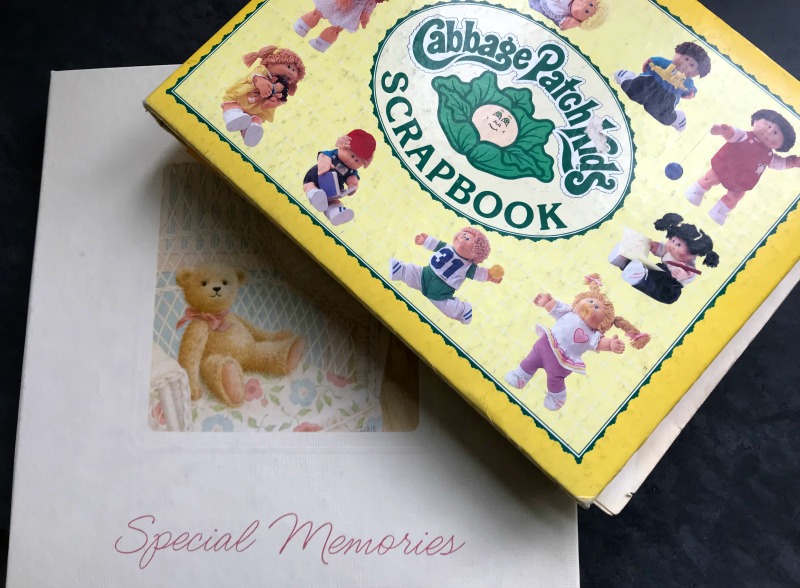 A Look Through the Memories in My Childhood Scrapbooks

I’ve always thought of myself as a collector of memories, not necessarily things. The exception is when the things are symbolic of the memory itself. I’ve written about how I’ve kept many of the letters and cards I’ve received over the years. But it wasn’t until recently that I went through my old scrapbooks.

I have two scrapbooks from my childhood. The first is a Cabbage Patch Kid album that contains memories from elementary school. The second “Special Memories” book is all about the teenage and middle/high school years.

When I was looking through my scrapbooks, I found so many things — newspaper clippings, political campaign buttons, prom photos, and all the things you may expect a kid to treasure at some point. I also found items I completely forgot I had.

I read once that you should think back at what you loved as a child if you want to find your passion, or feel lost or unsure of your future path. The truth in this statement came through loud and clear as I looked through my scrapbooks because so many of the things I kept related to writing.

Here’s a look at  some of the memories I uncovered in my elementary through high school scrapbooks.

My elementary school held award assemblies where students received recognition for academic efforts. I never excelled academically, so the only awards I received were for citizenship. Things haven’t changed much; I still excel at time on task and my behavior continues to be excellent. My dad spent the majority of his career working in academic administration at San Diego State University. He always gave me the mementos he received from attending different events. In 1984, he heard Walter Mondale, the Democratic presidential candidate, and his running mate, Geraldine Ferraro, speak on campus. The admission ticket he gave me is below. My spelling was always atrocious (“knot” and “neet”?!?). You can see why I only received citizenship awards in school. My sister, Ellye, and I loved going to the San Diego State Aztec football games with my dad. Hard Rock Cafe opened in the United States in 1982 and later that decade, the restaurant became really popular among my peers. I became obsessed with the restaurant and wearing the Hard Rock Cafe t-shirt that was so popular. The chain opened its first San Diego location in 1988, and going there for the first time was probably the highlight of my year. Sophie and I attended Disneyland’s 60th anniversary celebration in 2015. At the time — and until I flipped through my scrapbook this year — I had no idea I was at Disneyland on its 35th anniversary: July 17, 1990. On January 16, 1991, Operation Desert Shield became Operation Desert Storm when the United States attacked Iraq in the first Gulf War. Clearly I felt the need to mark the occasion on my EarthWorks daily recycling tips calendar. I really disliked high school; always feeling like an outsider. But I found my niche on the student newspaper staff. I was so excited to be “hired” as a reporter for my high school’s Serrandipity newspaper. This is when my love of journalism and writing really took off. I’m not sure why student journalists needed a press pass as I don’t recall many “privileges of the scholastic press.” But I was so thrilled to have one, and these were the first of the many press passes I’ve had over the years. In the fall of 1992, I was a senior in high school and the nation was consumed with a presidential election unlike any before. This was the year that featured an established sitting president (George H.W. Bush), a rogue third-party candidate (H. Ross Perot), and a young Baby Boomer named Bill Clinton. I volunteered for the Clinton campaign and must have switched to Perot at some point, since I found both campaign buttons in my scrapbook. I’m trying to encourage Sophie to keep a scrapbook of her special mementos. I think it’s harder now, in today’s digital age, to think you’ll never have access to memories. But I’ve learned so much about myself looking through these scrapbooks. So I hope Sophie takes my advice and looks through her collections of memories 30 years later.