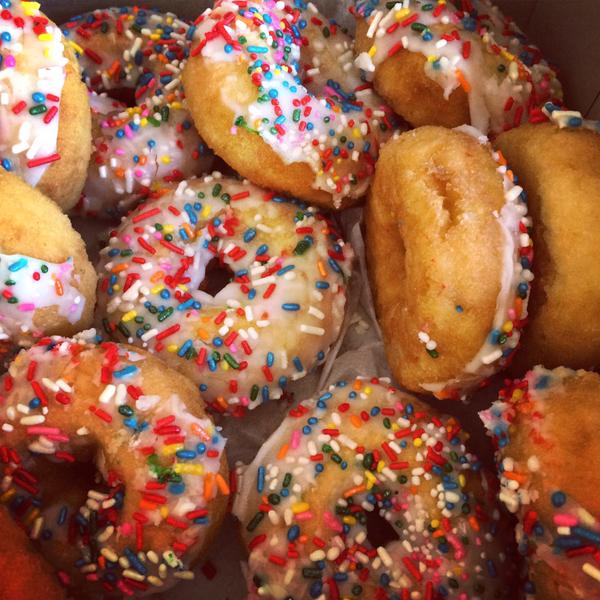 1. So the big news in my life is that my computer crashed last week. I’m not telling you this to get your sympathy. I was preparing for it for some time. All of my files and photos were backed up (learned that lesson the hard way). I got a new iMac with a huge screen and, honestly, I don’t know how I lived without this screen before!

2. ‘Tis the season for apples! If you’re looking for apple desserts, I complied all my apple baking recipes into this post last year. Enjoy!

3. I recently made coffee and donut ice cream, a recipe in my Seriously Delish cookbook, written by the author of one of my favorite blogs, How Sweet Eats. And yes, it was as good as it sounds. But let me say this: The recipe called for cake donuts and I had a tough time finding regular cake donuts at the grocery store. Do they not sell those rectangular boxes of plain Entenmann’s cake donuts anymore? Likes those you’d see next to a pot of Folgers coffee in a 80s television cop shows? Because sometimes you just need a plain donut!

And speaking of donuts, that photo above has nothing to do with the ice cream. They were my birthday gift to Bryan, who prefers a classic rainbow sprinkle cake donuts than actual cake.

3. Those of you who’ve been reading this blog for a while know that I LOVE The West Wing. I watched it when it was first on the air and have probably seen the episodes hundreds of times. I still watch them when I need a pick-me-up. I own all seven seasons on DVD, which I acquired before Netflix (and you never know when they will disappear from the lineup). Anyway, I saw this article about 13 times Toby Ziegler was you at work. While I always thought of myself as more of a Josh Lyman type, this article is spot on!

4. Speaking of The West Wing, I cannot wait to see the Steve Jobs biopic. Aaron Sorkin is one of my favorite writers (see #4 above). We never see movies in the theater anymore, but I guarantee we will see this one.

5. Bryan recently came up with a list of television shows he wants to binge-watch. We compared lists and suffice it to say none of our shows were on each others’ lists. Bryan likes SciFi and aliens. I like crime and drama. We did manage to both want to watch Narcos on Netflix. It’s interesting, but I keep expecting Johnny Depp from Blow to walk through a scene. Have you watched Narcos?

6. I say this ever year, but I really want cool, fall weather! It’s been so HOT the last few weeks in San Diego. Historically September and October are warm months, and I just hate it because I want to wear something other than a sleeveless top and shorts to go apple picking. We don’t have central air conditioning either. I know many of you that live in other parts of the country will laugh at my complaining. But here’s the thing: We Southern Californians aren’t prepared for this heat and the humidity of late. If the temperature gets below 70 degrees – and actually rains – the local news starts each broadcast with a “STORMWATCH” headline. And if it gets above 88 degrees, it’s “HEATWAVE.”