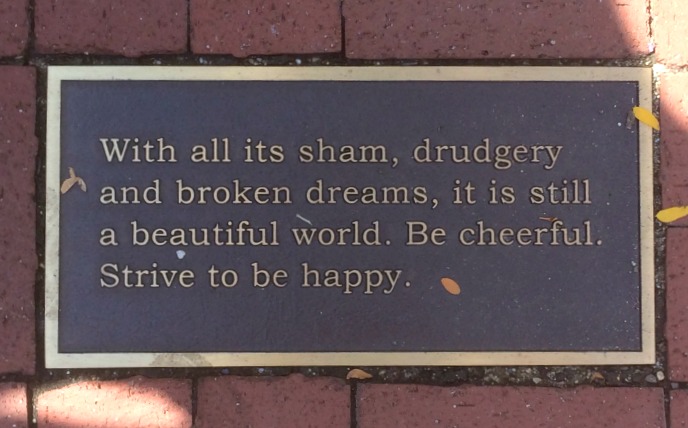 Happy Monday! Not to sound like a cliché, but how is it the last week of September?!

1. Indiana is known as the Crossroads of America, mainly because of the corner of downtown Terre Haute where the nation’s first major north-south and east-west highways intersect. At this historic spot, there are several plaques on the ground that contain inspirational quotes. Each time I visit, a different phrase stands out to me. On a recent visit to the Crossroads, the plaque above caught my attention. Perhaps that old adage is true: that you see what you need to only when you’re ready to take it in.

2. Rolling Stone released a list of the top 100 television shows of all time. I had fun going through and counting how many shows I’ve seen. I have mixed feelings about the top two picks. And while I do agree “The Sopranos” was breakthrough television, I’m not quite sure I agree where it ended up on the list. Did it truly pave the way for shows like “Breaking Bad,” “The Wire” and “Mad Men” that followed? What are your thoughts?

3. Do you know what your Patronus is yet? Mine is a Thestral and it’s supposedly rare. If you’re not sure what I’m talking about, Pottermore released its new quiz on Friday so Harry Potter fans can figure out their spirit, or shield against evil. But the best part of all is this Buzzfeed article detailing how upset people are about their Patronus results. Read this! It’s hysterical, Mean Tweets style!

4. So although I’m a classic Generation Xer who grew up in the 1980s, I’m really not as nostalgic for that decade as so many others seem to be. 80s music? I’m honestly okay if I never hear it again. 80s parties? Not my thing (okay if we’re being honest, parties aren’t really my thing seeing as I’m an introvert). But nonetheless, this list of 39 things girls who grew up in the 1980s understand is pretty much spot on. Plastic charm necklaces, Tinkerbell make-up, My Lil’ Pony, Lisa Frank, Lip Smackers, Teen Works — I owned all that excess.

5. Finally, Deb Perelman of Smitten Kitchen shares advice she’d give to new food bloggers, ten years after she started her blog. In the article she said, “I fully expected Smitten Kitchen to be a 6-month endeavor; nobody was going to read about cooking from an opinionated non-expert.” So does she think writers should start a food blog today?

6. Speaking of food blogs, “Julie and Julia” was on television the other day and I was reminded of how much I can’t stand the Julie character (in the movie and the book). Meryl Streep as Julia Child though? SO good!

What’s going on in your life? What are you thinking about this Monday in September?