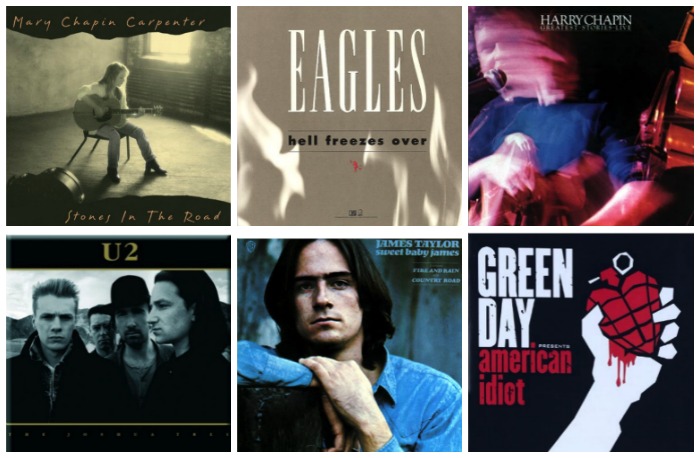 Music, My Old Friend, and a Few Favorite Albums

Music is not something that I’ve written a lot about on this blog. Although it’s always ever-present in my life. Perhaps because various songs always accompany me on the road, at my desk or in movies, they are so integrated into daily life that I rarely give it a second thought. But so many singers, songwriters and songs have impacted my life in deep ways.

I have a bit of an eclectic taste in music — country artists, alternative, acoustic, and a real weakness for 1970s singer-songwriters and bands. I’ve discovered some great music over the last few years. If you’re curious, here’s a sampling of what I’m currently listening to on Spotify.

Mary Chapin Carpenter remains my favorite. I’ve grown from 18- to 41-years-old with her words and music a constant by my side. Her 15 CDs sit on my bookshelf. (Yes, I still own CDs — an entire tower of them.)

Lyle Lovett, Dawes, Jason Isbell, The Head and the Heart, and Jackson Browne made a very long drive from El Paso to Dallas, Texas go by in the blink of an eye this past summer. And Harry Chapin’s songs are the anthem of my dad and family road trips when I was a kid. These are just a few of the many musicians who have made an imprint on my life.

I know of no bigger music fan than my brother-in-law, Steve, whose house is lined with vinyl albums and CDs, and he writes thoughtful posts about music on his blog, Parallax Moves. He and my sister, Sari, are always adding to their top albums list, going from the top ten to now 250!

For Steve’s birthday last year, I put together a list of my top six albums, along with some thoughts about why I made the choices I did. I’m already working on my next set of favorites since Steve’s birthday is next month. It’s hard to narrow your favorite albums and songs down to five, ten or even 20. I don’t know how Sari and Steve selected 250.

I also started wondering if “young people” today are even familiar with the concept of an album. So much music is released digitally now, and you can buy or listen to individual songs. Is “album” an outdated term? I’ll leave that to Steve — and you — to answer.

Hell Freezes Over, The Eagles
I fell in love with The Eagles when I heard this album as a sophomore in college. This collection is one of my most frequently played CDs, and it includes all so many classic songs (granted not “Lyin’ Eyes”). Many music aficionados would argue it’s a cop-out to include a “greatest hits” type of album to a favorites collection. But I would argue Hell Freezes Over is a live album that marked the reuniting of The Eagles, and it also includes individual songs that were not recorded as Eagles songs otherwise (e.g. Don Henley’s “New York Minute”).

The Joshua Tree, U2
This was a tough call since it was either The Joshua Tree or Achtung Baby (and my first concert was U2’s Achtung Baby tour in 1991). But when I look at the songs I still love today, it’s always “With or Without You,” “Still Haven’t Found What I’m Looking For,” “Where the Streets Have No Names,” and “In God’s Country.” The songs are timeless and showcase how only musicians can create such powerful music and songs.

Greatest Stories Live, Harry Chapin
Greatest Stories Live is a symbol of my childhood and long road trips driving to and from Lake Tahoe. But what puts it on my “top albums” list is how the album and Chapin’s songs are timeliness. When I heard the songs as a kid, they were dad’s favorites songs. At the time, I could recognize the poetry in the songs. But as an adult, the songs have different meaning as they speak about a life lived, regret and reflecting back on the past (e.g. “Dreams Go By,” “Mr. Tanner,” “Taxi,” “Circle,” “Cat’s in the Cradle”). So now as I listen, I understand why dad loved them so much.

Stones in the Road, Mary Chapin Carpenter
Since Mary Chapin Carpenter is my favorite musician, it was really hard to select a top album. I wanted to include Come On, Come On since that album really made her a well-known name and how I was introduced to her. And of course, the songs are always compelling. And now after listening to her latest album, The Things We are Made Of, I feel that’s now one of her best works. But Stones in the Road (the follow-up to Come On, Come On ) spoke to me immediately and continues to as I listen to it today. The songs really showcase Carpenter’s talent, diversity and lay the foundation of her future songwriting.

Sweet Baby James, James Taylor
This album was a no-brainer to chose since it’s the record that brings us “Fire and Rain,” which is one of my favorite songs. Sweet Baby James also contains some of Taylor’s best songs: “Country Road,” “Blossom,” and of course, “Sweet Baby James.” Taylor himself is often cited as one of the first to included in the singer-songwriter movement that began in the early 1970s. I think this album is emblematic of that depiction of Taylor and his music.

American Idiot, Green Day
I’m not a big fan of the punk genre. However, I’ve always enjoyed the groundbreaking music of Green Day, with “Good Riddance” being in one of my top ten favorite songs. Perhaps it was seeing them perform at Lallapalooza in 1994 at Aztec Bowl when they were still fairly unknown. I think American Idiot is a work of art on its own. Every song Billie Joe Armstrong wrote for American Idiot is part of the overall album’s story of Jesus of Suburbia and the disillusionment of my Generation X.

What are your top albums? What musicians do you always listen to? Do we share any commonalities? Do you have recommendations for me?