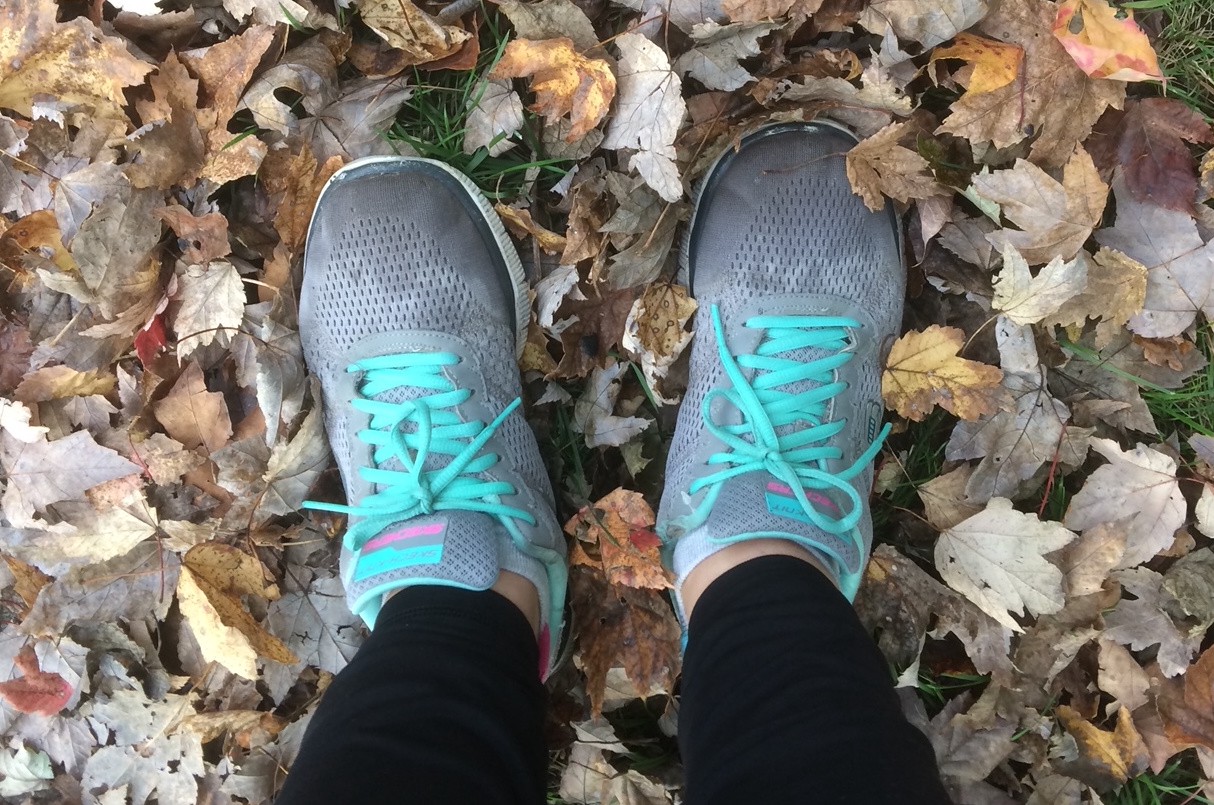 On October 8, 2016, three months after I moved from San Diego to Terre Haute, Indiana, I decided to go for a run. I wanted to be outside. I wanted to move. I wanted to feel free. I was tired of feeling run down, and trapped inside my house, my body and my mind. It was a Saturday fall afternoon, so the weather was turning slightly cooler and leaves were starting to clutter the ground.

I kept my running plans to myself, perhaps because I wanted this to be MY activity and mine alone. As my husband, Bryan, was just about to drive our daughter, Sophie, to volleyball practice, I casually told him I was going out for a run. “Be careful and don’t push yourself,” he said. “When was the last time you ran? You don’t want to hurt yourself.”

I put on an old pair of New Balance running shoes I found at a Ross Dress-for-Less four years earlier. I never spent a lot of money on exercise clothes or shoes since I would never use them to their potential. I didn’t deserve expensive running shoes; they’d be wasted on me. So on went those shoes, along with a pair of baggy black cropped yoga pants, and a turquoise blue short-sleeve shirt, worn over two very old extra-large black sports bras from Target (if I was going to run, I needed the large chest I was “blessed with” to stay intact). My shoulder length brownish-blond hair was pulled back in a ponytail and I was ready to go.

Across the street from my house is a sidewalk path that runs from east to west, from Dobbs Nature Park to Deming Park, which is full of playgrounds, tennis courts, a pool and grassy hills for disc golf. From park to park, running one way on that sidewalk trail was just about one mile (although I had no idea of its length at the time). In my two months in Indiana, I came to realize that sidewalks are a rare thing in the Midwest. Such a common place to walk in California didn’t really exist here in Terre Haute. It was small things like sidewalks that made me realize how far from home I truly was. So I noticed every sidewalk and decided that stretch would be what I would run that October afternoon.

I went outside my front door, crossed the street, and I started to run. And then I walked. And then I ran again. I didn’t have a fancy watch or timer. I didn’t even listen to music on that first run. But I moved, on legs that felt heavy and a body that carried 40 pounds of fat that it doesn’t hold today. I struggled with picking up one foot and putting it in front of the other. My head felt like it was “ahead of” my body, and when I picture myself in my mind, I see an image of just that — my skull, head and shoulders protruding out and going faster, while my torso, legs and feet struggled to catch up from behind me.

Breaths came rugged and fast. I tried to push air through my nose and out my mouth, a breathing technique that felt similar panic. My heart pounded faster and faster, to the point I could hear the pulsing in my ears. Was this cardiac or aerobic activity, or was this simply old fashioned anxiety? How would I know the difference?

My foot was sore, and I felt a tightness in my right hip. Was the pain real? It wasn’t there before. Maybe it was there to occupy my brain; anything to keep my mind from focusing on the real pain that was deeper inside my soul and poked through my exterior with headaches and sleepless nights. Suddenly, I realized I made it to Dobbs Park on the east side of the trail. The pain was gone and I was flying off the ground.

Eventually, I finished my run. I don’t think it was even a full mile, and I’m sure I walked more than I ran. The idea of racing, fast or even a “sub 15” minute mile was laughable to me. But I did what I set out to do: I ran. My body felt lighter and my cheeks detected a smile across my face. My shoulders held me up higher. And while I was sweating and breathing heavily, it was in relief; not in pain.

I got back home to two dogs barking loudly, wondering what had happened to me outside the walls of the house; and more importantly, why they weren’t allowed to come along. I guzzled water to quench my thirst and my parched mouth. For the first time in a very long time, my body felt like it was awake. And in an almost intimate way, I felt connected to my physical self. I was glad Bryan and Sophie were still at volleyball practice, as the running and those feelings were mine, and mine alone.

Two days later, I went outside and ran again, on the same path and in the same clothes and worn-down shoes. And then I did it again. Almost every other day, I ran/walked that stretch of sidewalk across from my neighborhood. Eventually I added more time, or repeated that path to get two miles. Or I ventured into the park to add distance. I had no plans for those runs. I only went outside and let my feet and mind take me where they wanted to go.

Eventually, I created a Spotify playlist and my phone and wired Apple earbuds accompanied me on runs. Soon enough, I figured out that “Free Fallin’,” “I’m on Fire” and “Solsbury Hill” would get me about three-quarters of the way through the run. I added more and more songs, and that “Classics” playlist, as I called it, would keep me company for the next several years.

I ran alone, but I was never lonely. I found something out there, moving in nature by myself. I had no idea what it was, but it comforted me. It made me feel strong and free; feelings I didn’t have inside my house or inside my body. After that day in October 2016 — and for the first time in my life — I kept running. I didn’t want to stop. I couldn’t stop.