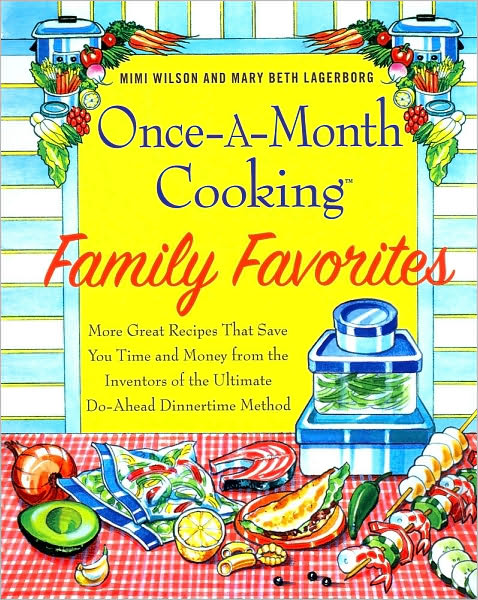 My Foray Into Once-A-Month Cooking

Essentially this book instructs you how to create 30 healthy, homemade meals for your family in one day. If 30 meals are too much, the book also has 2-week meal cycles, summer and “gourmet” menus, and a gluten free cycle. Once-A-Month Cooking lays out exactly what you need to buy for each meal cycle, the order in which you chop/prep/process the food, and the order to make the meals. As someone who is organized and LOVES to cook, I was impressed and eager to give it a try.

This experience was great – fun and easy! Even though the book tells you step-by-step what to do, I was able to use a lot of my creativity and cooking skills as I prepared the dinners. When all was said and done, I felt like I accomplished a lot.

So here’s a summary of what I did, what I learned, and a few tips for those of you brave enough to try it too.

I bought the majority of food at Vons, buying items on sale and generic brands when possible. I suspect Costco would have been less expensive for the meats (e.g. hamburger, chicken breasts, pork chops) – maybe next time. I bought my fish and second pork loin (more on that one below) at Trader Joe’s. I already had quite a few of the staple pantry items and spices on hand. At the suggestion of my friend, I bought the aluminum and plastic storage containers at a 99-cent store. I spent a total of about $275 on the dinners. This may be a bit on the lower side for a total of 21 dinners. I eliminated five dinners (based on our taste buds) and ran out of chicken for four chicken dishes.

The next day, I began the prep process and started cooking. I completed the prep and 10 dinners in one day (about 5 hours). Because my family beckoned, I had to finish the remaining dinners the following day (about 2 hours).

One thing I noticed is there seemed to be a lot of extra steps. For example, many recipes call for you to combine ingredients in a mixing bowl to make a sauce, and then add to a Ziploc bag. For most meals, I eliminated the mixing bowl stage and added all sauce ingredients straight into the bag. This saved a lot of cleaning time.

A few of the pie/quiche recipes called for you to put the cheese mixture in a Ziploc, the meat mixture in another Ziploc, and put those in a bag with the frozen pie crust. Then when you’re ready to make the dish, you to put everything in the crust and bake. I eliminated the extra Ziplocs and steps by putting the items into the crust and freezing the dish in its entirety.

Many recipes (such as Beef and Barley Soup) instructed the meats to be cooked, then cooled, and then added to a soup and freeze. I’m not big on cooking meat and then freezing it (personal preference). So for this recipe (and others), I bagged the raw meat and opted to cook it when I cooked the actual meal. We ate this soup the other night and it was quite tasty!

My Once-a-Month Cooking “horror story” involves the Nan’s Indonesian pork loin dish. This story has nothing to do with the dish, but the cook herself. I purchased the pork loin from Vons and loaded it into the car along with all the other groceries. The next day when I went to make this dish, I could not find that loin of pork. After the searching the refrigerator high and low and checking the receipt to make sure I did, in fact, purchase the loin, a thought of horror came over me: It must still be in the car! I open the back of my car and lo and behold, behind the stroller, there it was! Unfortunately I had to send that one to the trash (against the wishes of my dogs).

Thus far, we’ve eaten the Beef and Barley Soup and Creamy Chicken Enchiladas. My strategy is to save these dinners for work nights when I have less time in the evenings to cook. But the enchiladas looked so good they didn’t make it to the freezer. We ate those that night – yummy!

So there you have it – Once-A-Month Cooking. I’m excited to try the other dishes I made, as well as the other recipes in the book. Bon Appetite!