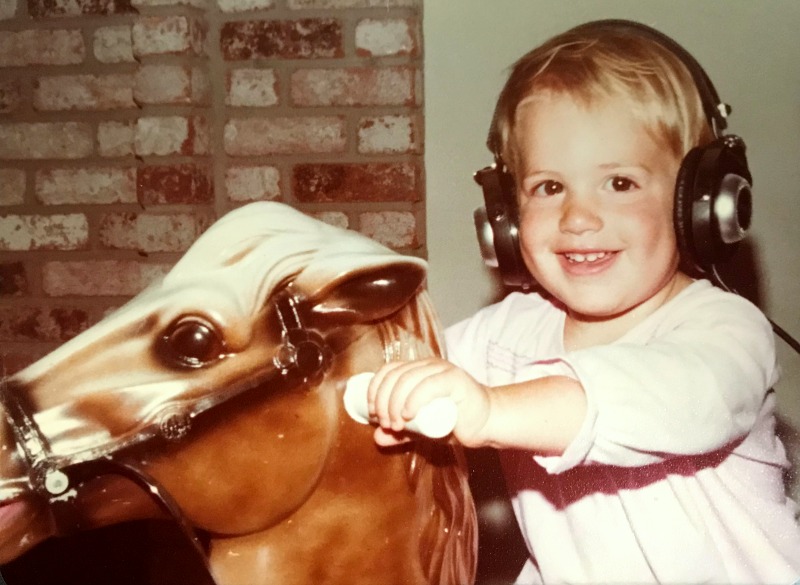 My Mom, My Musical Foundation

This photo of me at 22-months old (not even 2 years) shows exactly how far back music has been in my life. According to my mom, I would ride that plastic horse and listen to John Denver records through headphones. (Who knew those large headphones and vinyl would be just as popular today as they were in 1977?!) This photo explains why the lyrics to John Denver songs have been with me for as long as I can remember, and why I’ve always had a song playing in my head. There’s a reason music became a constant companion in my life. And that reason is my mom.

My mom is my musical foundation. Unlike my dad who appreciates music, but is not moved by it (although his fondness of Harry Chapin taught me many life lessons), my mom is constantly listening and singing along. She gave me a deep appreciation of songs, and instilled in me from a young age that it’s important to know the names of the oldies and classic songs, as well as the artists who sang them.

Mom used to do a thing. We’d drive in the car and listen to the radio, usually an oldies or “soft rock” station. Mom knew all the oldies and as she’d sing along, she’d tell me the names of the songs and the singers or band. “It’s the Beach Boys,” she said when “Surfin’ USA” came on. Or she’d sing along to “Peggy Sue, Peggy Sue …” and would tell me Buddy Holly is the singer. This is how I learned about music, and began to recognize different singers and paired songs to their voices. Before the days of the Internet, mom was my go-to source for pre-1980s musical knowledge.

So many of the artists I love today are ones my mom introduced me to as a kid: James Taylor, Jim Croce, Gordon Lightfoot, Carole King, Elton John, Carly Simon. All those classic 1970s singer-songwriters, mom loved them and I can’t help but love them too.

When she visited me in Indiana earlier this year, we spent some time listening to records on my turntable. Not surprisingly, the bulk of my record collection is from the 1970s and late 1960s. She was thrilled to see Carole King’s “Tapestry” among my vinyl, as mom had that record when it debuted in 1971. We also listened to Buffalo Springfield, Eric Clapton, John Prine, America and Emmylou Harris. Mom asked how I got so interested in those 1970s records. “From you,” I replied.

Our shared love of music does not stop at oldies and 1970s singer-songwriters. When I started listening to country music in college, she listened along with me and fell in love with Mary Chapin Carpenter with as much fervor as I did. We attended many of Carpenter’s concerts together, all of which hold a special place in my heart.

Relationships with mothers can be a tricky thing (especially for daughters). I think we sometimes neglect that bond because we know, deep down, moms are always there in some way. So as much as my mom’s quirks have caused me to shake my head over the years, I give her credit for helping to build the deep musical foundation of what’s become critical to my life.

Fast forward to today, I find myself with Sophie doing exactly what my mom did with me any time an older song plays. Like a natural instinct, I automatically tell Sophie the song and singer.

“It’s ‘La Bamba’,” I tell Sophie. “Ritchie Valens is the singer. He’s the one who died with the other musicians on the day the music died. The ‘American Pie’ song. You need to know this.”

“Oh,” she replies, sounding bored and acting like she doesn’t care.

Yet the next time Sophie and I are in the car and “American Pie” starts playing, she asked me, “So who else died in that plane crash?”

She remembers. And in a strange way, this makes me proud. I’m not the best person to help Sophie with math homework, but at least I can give her an appreciation of music. Just like my mom did for me.