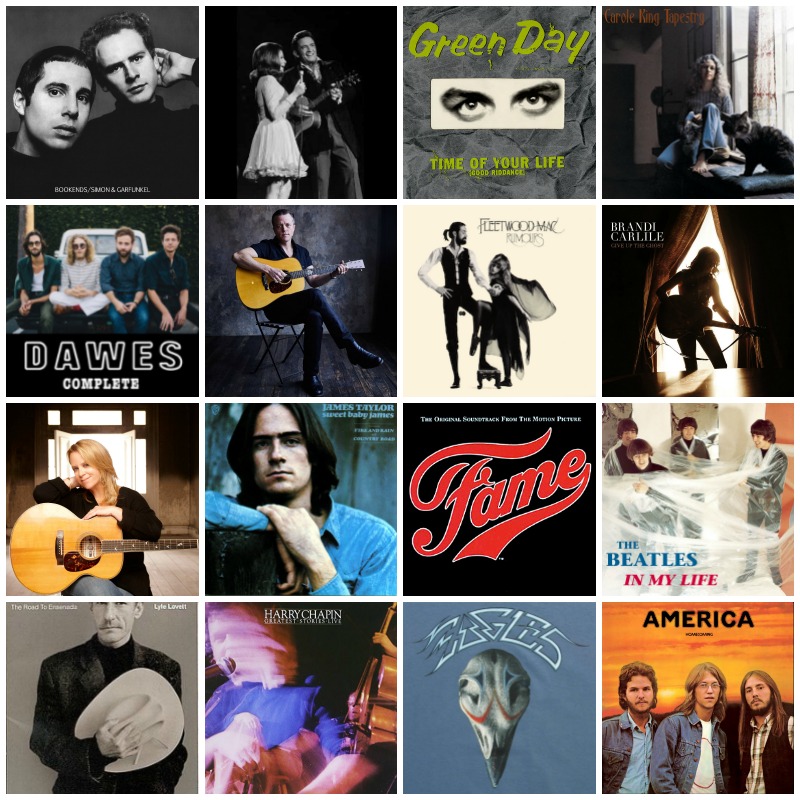 My Top 100 Favorite Songs and the Power of Music

I recently set out to create a list of my top 100 favorite songs. This was NOT an easy task.

But as I began filling up the list, my thoughts changed to, “How the heck can I narrow it down to only 100?!”

I went back and forth, debating whether I had too many songs from my favorite artists (Dawes, Mary Chapin Carpenter, The Eagles), and stressing about whom I was missing on such a critical list. I added and deleted, and then deleted and added more. I was still playing with the list up until the moment I hit “publish” on this post.

My taste in music is not typical for someone whose formative years were the 1980s and 90s. I guess I’d consider my favorites genres in the realm of folk rock, indie rock, country, and the Laurel Canyon – 1970s singer/songwriter era. I often wonder if I was born in the wrong decade when it comes to music.

That’s not to say I don’t appreciate the groundbreaking songs and musicians of 1980s pop, New Wave, rap and hip hop. But you won’t find much of that on my top 100 list because those are not the songs that resonate with me. Now if I was making a list of the most influential and groundbreaking songs in music, that would be a different story entirely.

So after much deliberation and still some uncertainty, I managed to collect 100 songs that I could listen to over and over again.

As I was creating this list, I realized even more what an incredibly powerful force music is in life and how many memories (both good and bad) are associated with song.

I remember my college friend, Aimee, frantically telling me I had to listen to this song “Ironic” that she recorded off the radio and on a cassette tape. “Oh my gosh,” she said in hysterics. “This is EXACTLY how I feel!” That was 22 years ago, but it feels like last week.

I’m reminded of the time my friend, Becky, and I went to see the Foo Fighters play at a little club in San Diego, back when nobody knew who this band was. The club was nearly empty and very few people even knew the drummer from Nirvana was in this band.

I remember walking past the San Diego State Open Air Theatre when I was just starting as a freshman in college, and hearing Tears for Fears play inside.

And even today — 16 years after September 11, 2001 — I cry every time I hear Alan Jackson’s “Where Were You (When the World Stopped Turning)” and Mary Chapin Carpenter’s “Grand Central Station.”

So without further ado, I present my list of top 100 favorite songs. They are in no particular order (that would be a real challenge). And yes, there are repeat artists; but I’m okay with that. These are the songs that describe me best. They are the tapestry of my life.