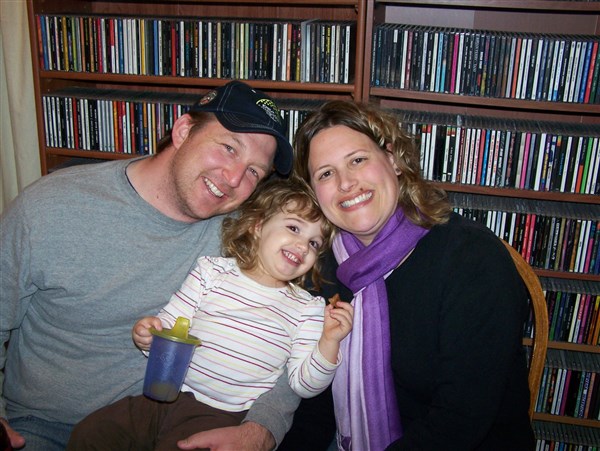 I’m the type of person who decides to do something and then does it, no matter what time of year it is. So being forced to come up with goals and plans for the year ahead goes against my nature.

But I did have two goals that began in late 2008/early 2009 that coincided with the New Year.

The first was a physical goal. I needed help getting back to my pre-baby size, as well as feel healthy again. Before young Sophie, I was fairly active. I walked the dogs nearly every day. I attended pilates twice a week, and did cardio and weight training at the gym.

But anyone who’s become a mom and works outside the home knows that lifestyle isn’t quite possible after baby. (At least it wasn’t for me.)

So the week of Thanksgiving 2008, I joined Curves. I liked the concept of 30 minutes of set activities to follow. And leaving a few minutes early from work a few times a week seemed manageable without impeding on my Sophie (or work) time.

My first visit to the club consisted of a full body work-up – height, weight, body mass index, and measurements of all major body areas (biceps, things, abdomen, stomach, hips). I’ve never been one to obsess over numbers on a scale. I measure my weight based on how my clothes are fitting and how healthy I feel. After seeing my results and knowing what wardrobe was waiting, I resolved to wear my old clothes again, and I looked forward to getting a more active lifestyle back. So for nearly all of 2009, I went to Curves on a consistent basis.

Almost a year later – the week of Thanksgiving 2009, actually – I had another full body work-up. I’m proud to say that I lost 10 pounds and a total of 26 inches from throughout my body.

The second goal was a financial one that Bryan and I set together. On January 1, 2009, Bryan and I decided to get in financial shape. We needed to spend less, save more, pay down debt, and get a better handle on our finances.

The first thing we did was stop using all credit cards – cold turkey. Next, we created a budget spreadsheet so we knew exactly how much we could spend, as well as track all our expenses. The money pretty much went all toward household bills, groceries, car essentials, Sophie, and debt. And anything left-over at the end of the month went into savings.

It was tough at first (and still is). But now – one year later – it feels great knowing exactly how much we have and everything is budgeted for.

I am proud to say that we kept to our goal of not using credit cards at all in 2009. And we paid down our debt by about 75%. When Bryan and I both got hit with furloughs in August of last year (which translates to a 10% monthly pay cut), we were able to adjust our finances without much of an impact.

We ate out far less (not that we ate out very much anyway). We made our own coffee (bye bye Starbucks – except for the occasional weekends or gift cards). We also did small things, like unplug cords from outlets not being used and watched our electricity bill go down. And we carpooled to work as much as possible to save gas money.

We also have more money in savings than we did in January 2009. So we paid down debt, saved money, and only lived on what we had. It’s a nice feeling and great way to end 2009.