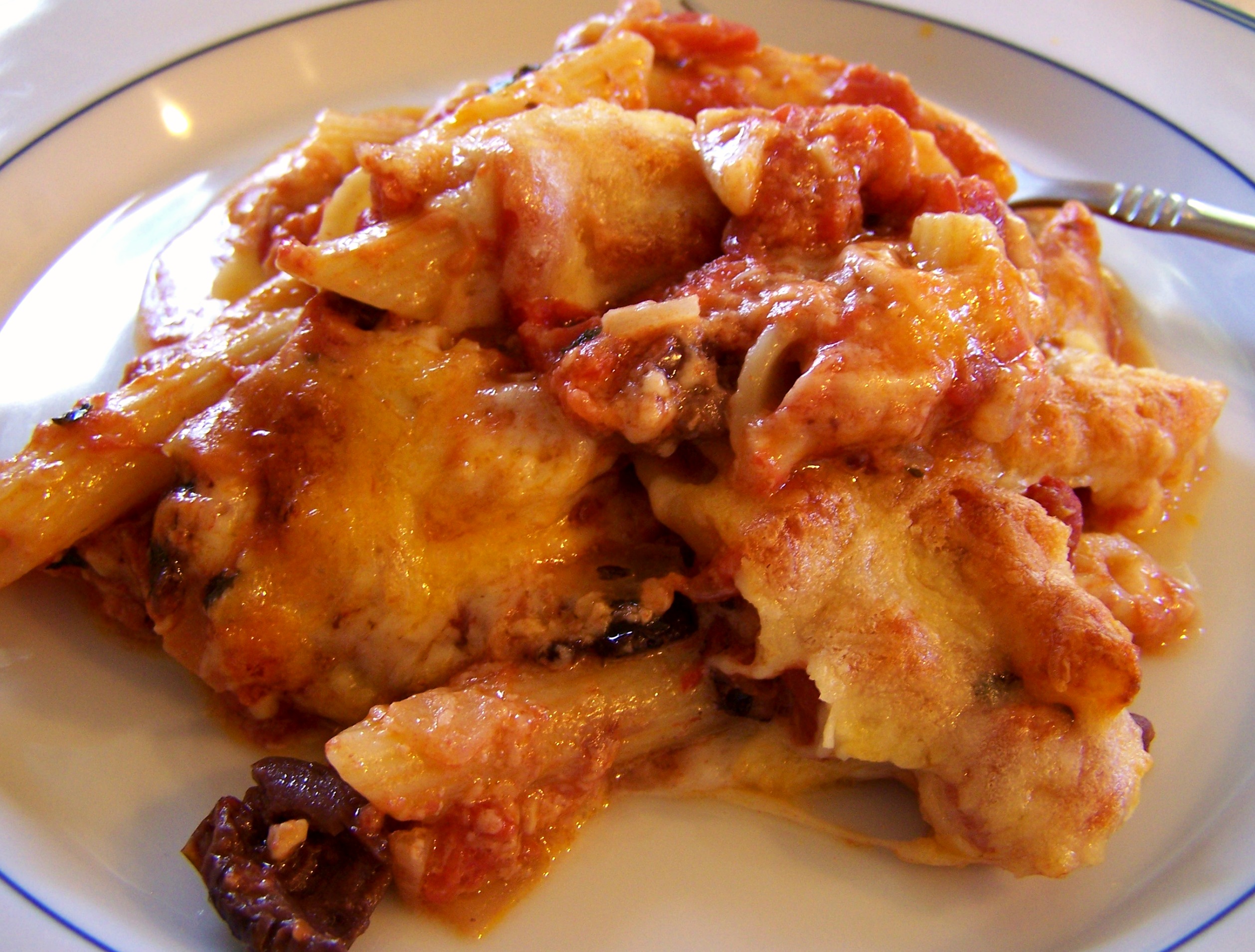 Penne with Havarti and Kalamata Olives

Do I have a treat for you! I’m sharing one of my signature, tried-and-true dishes. This is the dinner I bring to my friends after they’ve just had a baby. And it’s our Christmas Eve tradition. Ladies and gentlemen, I present you … Penne Pasta with Havarti and Kalamata Olives.

The recipe was given to me by a friend more than 10 years ago. I think it was from an online recipe site, but I’ve adapted it over the years to the recipe below. This is a hearty vegetarian dish, and can be made gluten-free by substituting the pasta for “penne” rice noodles if you wish. (I did that for a friend and it tasted just as good as the original.)

One of my favorite memories of eating this pasta was in a September 2007 massive heat wave. I was 8-months pregnant with Sophie and the only air-conditioned room in the house was our bedroom. Bryan, the dogs and I literally spent the entire weekend in that room, even eating our meals in there. This leftover pasta was one of the things we ate in our “bedroom refrigerator.”

Let me warn you this dish is time consuming to make. It’s super easy and is so worth the wait. But don’t attempt this when you get home at 8 p.m. and are starving. I like to make it Sunday nights and we enjoy the leftovers through the week.

Salt and pepper to taste

Heat the olive oil in a large Dutch oven pot over medium-high heat. Add the chopped onion and garlic. Saute until translucent. Mix in tomatoes, dried basil, red pepper flakes, chicken broth, and salt and pepper. Bring mixture to a boil. Cover and reduce heat. Simmer until the mixture becomes chunky and is thickened. This typically takes one hour. This is the most time-consuming part of the dish.

When the tomato sauce is nearly complete, cook the penne pasta until al dente. This is really important: It MUST be al dente; even under-cooked. It will cook more when it’s mixed with the sauce and baked. Believe me – there’s nothing worse than eating pasta that’s over-cooked.

Meanwhile, preheat the oven to 375-degrees and spray a 9” x 13” baking dish. Chop the Kalamata olives and shred the cheese. Mix the drained pasta into the sauce (off the heat). Add the olives and cheese to the mixture and stir.

Bake until pasta is heated through, about 30 minutes. Remove from oven and let sit about 10 minutes before serving.