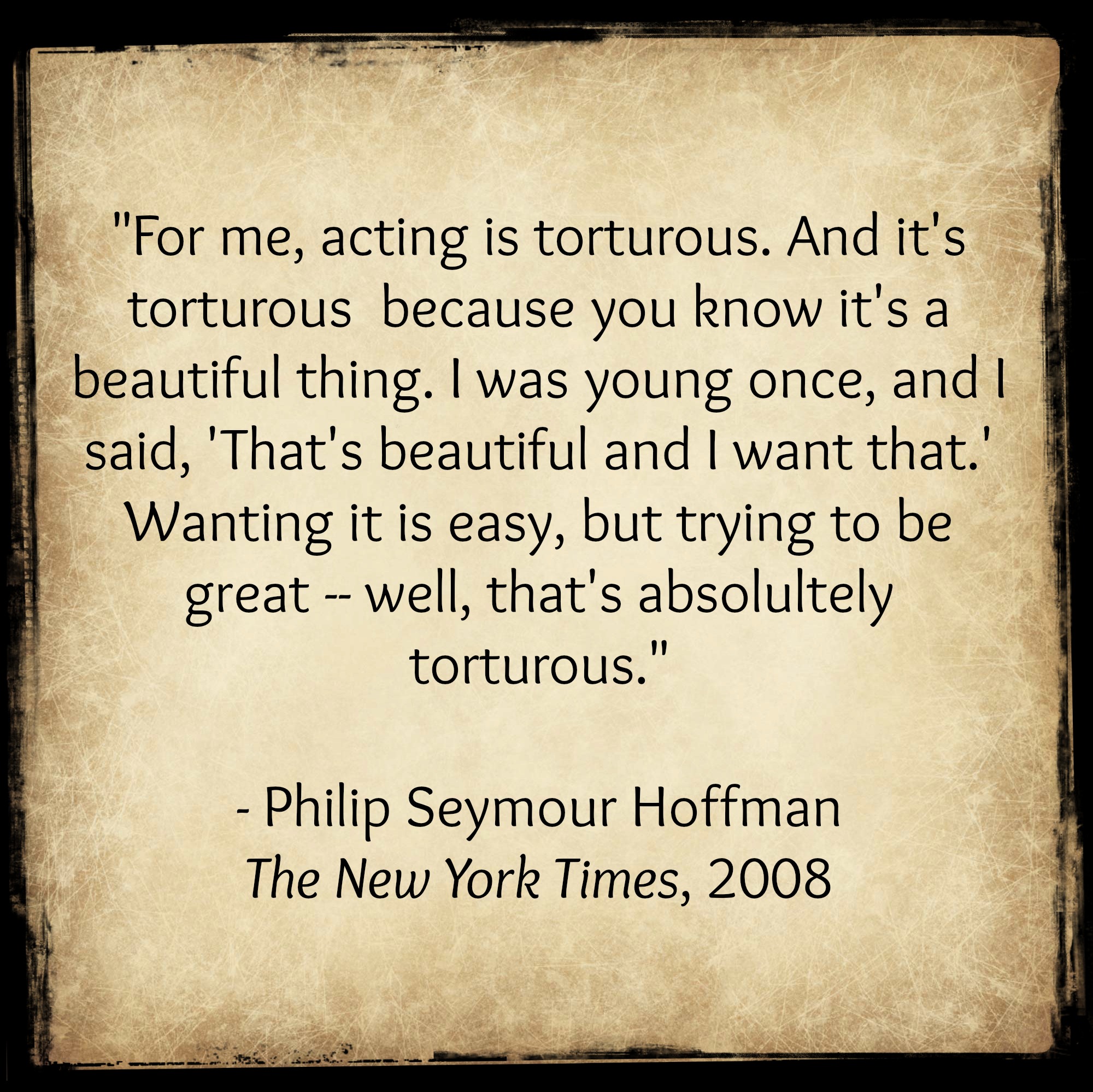 Last weekend Bryan asked me to join him watching a movie – Synecdche, New York, written and directed by Charlie Kaufman. This movie tells the story of a troubled New York playwright who is obsessed with his own mortality and sets out to construct a massive play that he hopes will give meaning to his life. Now I’m not a fan of Kaufman’s movies, so this one wasn’t high on my priority list of films to see. But I decided to give it a chance for one reason only: Philip Seymour Hoffman.

I finished the movie with the same opinion of Charlie Kaufman as I did before starting Synecdche. But there was one opinion I had that was confirmed by this trippy film. Hoffman – who played the lead in Synecdche, New York – was nothing short of brilliant.

Hoffman was one of the greatest actors I’ve ever watched, embodying his characters so much that it was almost eerie. Just like in Synecdche, he brought immense talent and realism to the screen that you actually forget it is Hoffman playing a character at all.

I was shocked when I heard about Hoffman’s death this past Sunday. I am devastated when I think about the talent that is lost and his children who are left without a father. And I’m haunted thinking about the manner in which he died and the demons that must have plagued his life so deeply.

But more than the sadness, I’ve been almost speechless at the comments people are writing throughout the Interwebs — how Hoffman chose drugs over his life, that he was selfish and wanted to die.

Addiction is a scary, all-consuming beast. Drug addiction, alcoholism, gambling, sex addiction, shoplifting, smoking, over-eating, over-spending … taken to the extreme, these are all addictions that can be as dangerous as shooting heroin.

People don’t set out to become addicts. It’s not a career objective that’s written at the top of a resume. Addiction is a way of life that becomes almost inescapable.

It saddens me that people pass judgment about Hoffman’s life (and so many others) without for a minute thinking about how much pain (physical and emotional) he must have been in at the time he died.

I personally cannot go a day without a cup of coffee or two Excedrin because otherwise I will be overtaken by a horrible caffeine-withdrawal headache. Do you think I’d like to stop consuming caffeine? Absolutely! But you know what happens? The headache takes over and all I want is relief from pain.

Now I’m just talking about caffeine, a legal substance. Can you imagine the physical pain a heroin addict is in? I, for one, cannot. And I’d be willing to bet that a lot of the other people on the Interwebs passing judgment about Hoffman’s choices cannot imagine it either.

I am glad we watched Synecdche, New York the week before Hoffman died. I think it would be too heartbreaking to watch now, mainly to see Hoffman play such a sad and lonely man, trudging through a very difficult life, full of utter pain. More to the point, it would be too difficult for me to watch Hoffman portray not just another amazing character, but himself on screen.