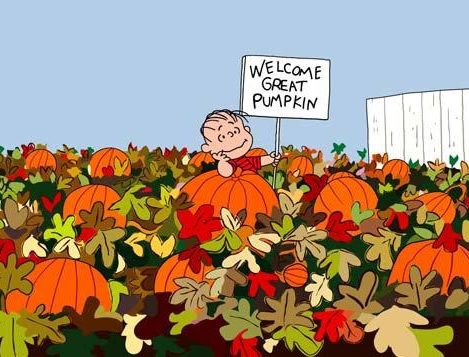 Religion, Politics and the Great Pumpkin

Recently Sophie came home from school and asked me an odd question.

I asked her where she heard this statement. I mean, it’s not as if Sophie is a frequent viewer of Fox News or CNN, nor does she spend time perusing the Internet for news.

She said a friend asked her who she is voting for president. Sophie clarified to her friend that she herself can’t vote, but if she could, she supported Hillary Clinton. It was then the friend told Sophie that she’s voting for a murderer.

After hearing this, I decided to give Sophie some sage advice from Linus of the Peanuts fame:

There are three things I’ve learned never to discuss with people: religion, politics and the Great Pumpkin.

I echoed Linus’ words and encouraged Sophie not to engage in those discussions, no matter who is talking about which presidential candidate.

I’m not writing this post to scold this little girl, nor am I here to bash Trump. I’m also not here to convince you to vote for Clinton (I’ve already written about my feelings about that here). And really, whether you think Clinton is shady is really none of my business.

I believe different opinions are fine. But hate is not fine. And 8-year-old calling another 8-year-old a person who supports a murderer is not okay.

I wrote this post because I’m sad for our children. In this case, elementary school kids are burdened with these feelings and discussions. I’m sad this little girl felt the need to tell Sophie she’s voting for a killer. I’m sad Sophie has to hear these things in the third grade.

Needless to say, like most of you, I cannot wait for Election Day in less than a month.

A few days later, Sophie told me the little girl brought up the subject of Hillary Clinton again. So I asked what she said to her friend.

Sophie said, “I told her, let’s not get into a conflict. Let’s not talk about this. And [my friend] agreed.”