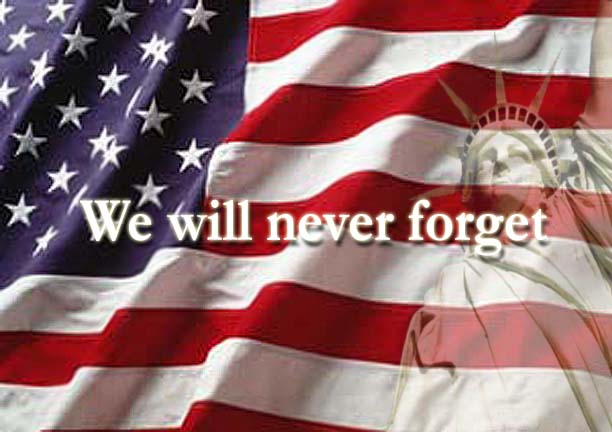 I got into my car around 7:40 a.m. to drive myself to work at SDSU (same campus, different job). Got in the car; started the ignition; and turned on NPR, just like any other day.

But something was different. I could tell in an instant.

The reporter started talking about smoke, airplanes, confusion, towers, the Pentagon. What was I missing?

Then I heard two words that I never much heard before on NPR. But sadly, I would hear so many, many more times – “terrorist attack.”

“WHAT?! What is happening?!” I was shouting out loud to the radio, in my car alone. I was starting to panic. I had no idea what was going on in the world at that moment. I was already on the freeway; so couldn’t turn back to home and turn on the television. I just drove to work; trying to get to my office as fast as possible.

While we now have an exact timeline of what happened that morning, at the time, we didn’t know what was fact or fiction; or what was happening where. It was all coming through in pieces. Americans all learned together that we were under attack. And it was so scary; probably the most frightening time of my life.

The campus received an order from our Chancellor to shut down the university around Noon that day. I don’t think anyone was really concerned for safety. It was more out of confusion and a general feeling of anxiety. It was probably for the best, since I don’t think anyone would have done any work that day. I drove home and sat in front of the television watching CNN for hours. Hoping to learn something, as I’m sure the rest of the world did too. That’s when the tears began flowing, and felt like they never stopped.

Later that day, the name and image of Osama Bin Laden began appearing on the news. The only recognition I had of this name was a story I’d seen on 60 Minutes a few months before. But sadly, I didn’t pay much attention to that story because I thought – like many others – What could that man possibly have to do with me? Little did any of us know…

Those next few months – and years – were filled with a lot of fear and dread. I didn’t even go to High Holiday services that fall because I was so scared a terrorist attack would happen at the place I was going to worship. On the first anniversary of the attacks in 2002, I stayed home from work and planted myself in front of the television. Mostly in fear that an attack would occur again; and I needed to know the minute it happened.

It’s been nine years since that day that changed America – and changed my life – forever. I still cry every time I see the images of the towers falling to the ground and I hear the horror in the voices and cries of the onlookers. My heart breaks when I read stories about the 9/11 widows and families. I’m haunted every time I listen to Mary Chapin Carpenter’s Grand Central Station, her beautifully-written homage to a September 11 worker sifting through the “holy dust” at Ground Zero. And tears fill my eyes when I hear Alan Jackson’s Where Were You When the World Stopped Turning?

I have only flown twice since September 11. The first trip was to Hawaii, where I rationalized that terrorists probably wouldn’t attack a plane going from California to Hawaii in the late afternoon. The second flight was to Washington, D.C. I had to take Xanax for that trip and I felt like I never really caught my breath until the plane landed safely in San Diego. I’ve had a fear of flying my entire life. But it has gotten worse since 9/11. Even today (and especially now that I have a child), the fear of flying has prevented me from traveling by air.

Now I only let NPR wake me in the morning. For the longest time, I’d wake with a slight feeling of dread, wondering what in the world I might wake up to that day.

As horrible as a tragedy 9/11 was, I remember feeling closer to my country, my neighbors, and the people around me. It was as if all those American flags that were on display brought us all together. Later that month, I went to the annual Harvest Festival (arts and crafts fair) and everyone was wearing red-white-blue and proudly displaying Americana items. Something was bonding all of us together. It was a feeling and sight I’d never witnessed before.

It’s sad that’s no longer the case. I fear that we – as a country – have let the memory of September 11 fade. Yet now more than ever, we need to remember that tragic day in order to stay strong and make sure it doesn’t happen again. We need to teach our children about our collective past. We need to become educated about the world around us again.

So today – on this ninth anniversary of September 11, 2001 – I will display with pride the American flag outside my house. I will wear my Americana shirt (and will make sure Sophie does as well). I will light a yahrzeit candle and say the Mourner’s Kaddish in memory of those who perished that day. And as much as it will bring me sadness, I will watch those images on the news and listen to that Mary Chapin Carpenter song. I will remember that day in our nation’s history. And I will weep.