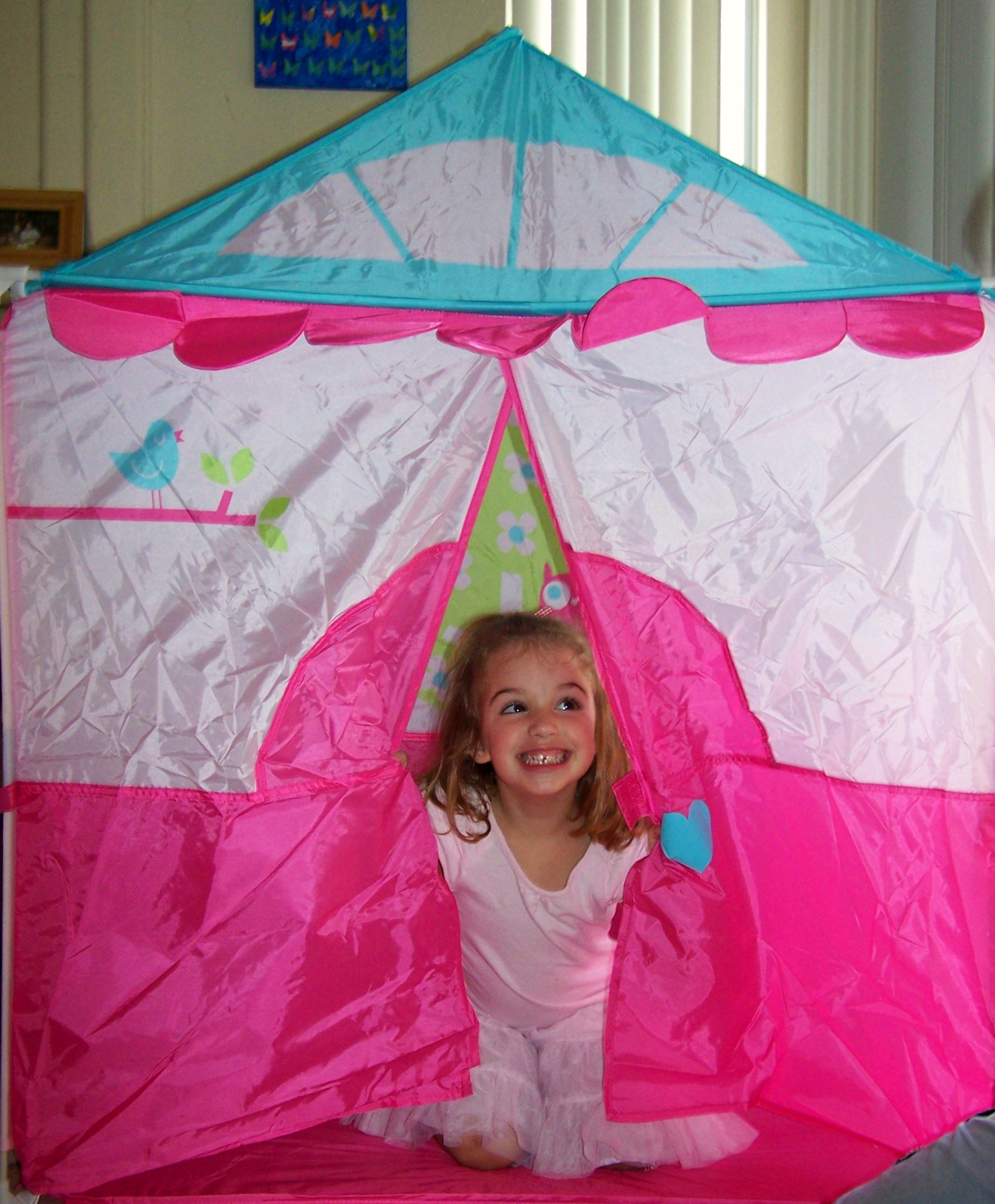 Sophie’s Quest for the Pink Tent

Sophie was on a mission. During a Thursday afternoon trip to Target last month, she stumbled upon a pink playhouse tent. Upon seeing the little pink indoor house, Sophie’s mouth dropped in awe. She wanted that tent and nothing else. Thinking quickly, I told Sophie if she wanted to bring the tent home, she’d have to earn it. … How?

She had to make it to Sunday without sucking her thumb (excluding during sleep since she is not consciously aware of it). If she did it, she could have the tent. Sophie was ready to go, determined not to suck anymore. That tent would be hers.

You will recall from earlier posts that Sophie is a thumb-sucker. Thankfully for us, Sophie is not a constant sucker; she only sucks when she has her trusty blankie with her. But this also meant that blankie traveled with her in the car and to preschool for naps, a habit we really wanted to break. So after quite a while of ignoring the issue, Bryan and I attempted to gradually wean her from the habit.

You parents of thumb-sucking children know, this is no easy task. Simply telling Sophie to stop sucking her thumb is not an option. I did not want to resort to scare tactics, devices or take away her blankie. So we were left with trying to find creative ways to stop – or at least lessen – the sucking. Hence the pink tent.

I’m sure there are schools of thought that say parents should not use rewards or bribery as an incentive for ceasing to thumb suck. However I also know Sophie is motivated by a challenge and, in this case, a want. So I figured this would be a way to test her resolve.

And she did it! Much of the key to the success was not having blankie with her 24/7. When Sunday rolled around, I took Sophie to Target where she ran to the tent box and picked it up with such pride. She and Bryan worked together to assemble her reward. And when it was ready, Sophie was in heaven. She has since had parties in her tent with stuffed animals and dolls. Books have gone in the tent for reading. It has become a secret hideout. And she even slept in it one night. True to the personality of our wacky animals, Bipp the cat also enjoys spending time in the covered pink palace.

It’s been a little over a month since the tent triumph. I will not lie; Sophie has not given up sucking the thumb completely. In fact, one day she was so determined to suck her thumb again that she marched up to Bryan and me saying, “I want to suck my thumb now. So you can put the tent away in the garage. I’ll get it again when I’m older.”

I do believe, however, that we are succeeding because she sucks her thumb WAY LESS than she did. Blankie is not constantly by her side. In fact, she rarely takes it in the car anymore and now leaves it home from preschool (which has also helped eliminate afternoon naps – another triumph!). And instead of waking up in the morning and carrying blankie to the couch, she now leaves it in bed. Even the sucking while asleep has lessened because her body is adjusting to the change in habit. Overall I think Sophie has really accomplished a lot and I’m so proud of her.

This experience has also had a huge impact on me as a mother. The day we went to Target for the tent, Sophie said to me, “Mommy, I don’t need blankie anymore because I don’t suck my thumb now. We should give blankie to another kid who needs it and doesn’t have a blankie.”

I heard these words and I lost it. Truly, I burst into tears that would not stop flowing. Little Sophie is gaining such a strong sense of self and confidence; wonderful things, but another reminder that my baby is growing up. Perhaps I identified with blankie, not wanting to be tossed aside because she didn’t need us anymore. Luckily, Sophie did not give blankie away. She sleeps with it and turns to it for comfort and security.

I think it’s safe to say that neither Sophie nor I are ready to give that up just yet.