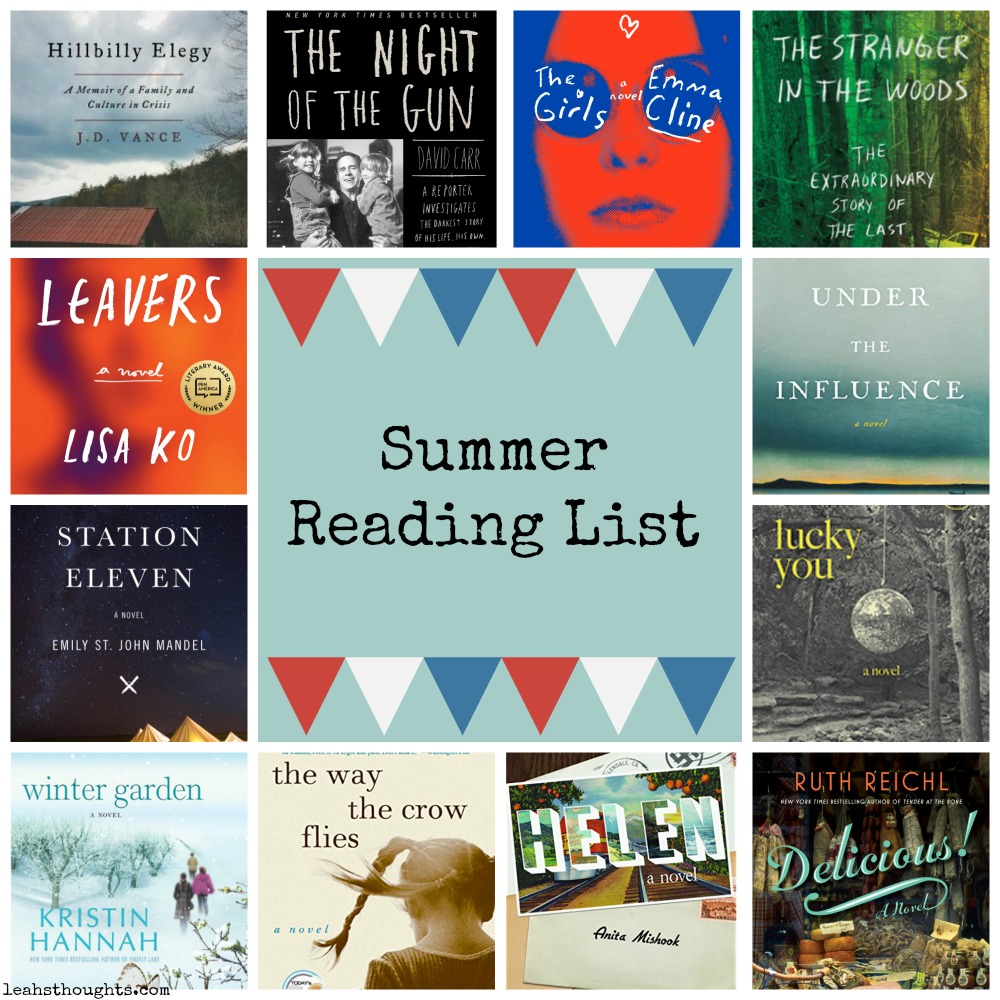 The Summer 2017 Reading Guide (Not Your Typical List of Book)

Let me start off by saying this is not your typical summer reading list. The books in this post are not the best sellers and new release recommendations you see on every big summer reading guides on all the blogs, websites and magazines. Because really, why do we need to read about the same recommended books on every site?

My summer 2017 reading list is made up of books that are on my nightstand and in piles waiting to be read. Some of them are old books, and there are a few fairly new ones. And while they’re not all the big hits on every list, I’m excited to read some great stories by talented authors and I hope you’ll find some summer reading inspiration, too!

Hillbilly Elegy: A Memoir of a Family and Culture in Crisis, J.D. Vance — I’ve actually already read this book, but loved it so much I couldn’t not recommend it. I wrote a pretty elaborate review of the book in my local magazine, Terre Haute Living. So click over there to read more about why this is such a phenomenal and important story.

The Night of the Gun: A reporter investigates the darkest story of his life. His Own, David Carr — I just started read this memoir and I cannot put it down. Carr, a lifelong reporter, spent three years investigating his own life of addiction and crime, using techniques such as videotaped interviews, legal and medical records, and reporting. What results is a fascinating true story. Also, Bob Odenkirk (Better Call Saul, Breaking Bad) is staring in AMC’s television adaptation of the book, and I cannot wait to see how he plays Carr in this fascinating story.

The Girls, Emma Cline — This novel tells the story of Evie Boyd, who in Northern California in the late 1960s, gets caught up with a bunch of girls in the park and ends up joining a cult that is modeled after that of the famous Charles Manson. The story is fiction, but based on historical realities.

The Stranger in the Woods: The Extraordinary Story of the Last True Hermit, Micheal Finkel — I’m intrigued by this memoir of an introvert, in the true sense of the word. From Amazon: “This is the remarkable true story of a man who lived alone in the woods of Maine for 27 years, making this dream a reality—not out of anger at the world, but simply because he preferred to live on his own.”

Under the Influence, Joyce Maynard — I love anything Maynard writes. The book tells the story of Helen, who recently lost her marriage and custody of her 7-year-old son due to drinking. Now in recovery, the book follows Helen on her journey and the relationships she becomes entrenched with during her sobriety.

Lucky You, Erika Carter — This is the story of three friends, Ellie, Chloe and Rachel, all in their early twenties and trying to find their way through life in a small Arkansas college town. From Amazon: “Each is becoming unmoored in her own way. … In a remote, rural house in the Ozarks, nearly undone by boredom and the brewing tension between them, each tries to solve the conundrum of being alive.”

Delicious! Ruth Reichel — Delicious! tells the story of Billie Breslin, who travels from her home in California to take a job at Delicious!, New York’s most iconic food magazine. She ends up discovering a hidden collection of letters written during World War II by a young girl to the legendary chef James Beard. Reichel is the editor-in-chief of Gourmet magazine, so I’m sure the food descriptions will make me want to eat the book.

Anita, Helen Mishook, From Amazon: “When Helen left New York on a train bound for California in 1936, she was looking for a change of scene, planning to stay with her sister in Glendale and babysit her niece and nephew. But when she arrived, she found herself steeped in a world of bookies, mobsters, and a Nazi underworld that she must infiltrate on behalf of the Anti-Defamation League.” The story tells the under-told history of the American Bund, the pro-Nazi Silver Shirts, and their efforts to build a summer retreat for Hitler near the Los Angeles coast.

The Way the Crow Flies, Ann-Marie MacDonald — I loved MacDonald’s epic family saga, Fall on Your Knees. This one looks like it won’t disappoint either. From Amazon: “The optimism of the early sixties, infused with the excitement of the space race and the menace of the Cold War, is filtered through the rich imagination of high-spirited, eight-year-old Madeleine. … When a very local murder intersects with global forces, Jack must decide where his loyalties lie, and Madeleine will be forced to learn a lesson about the ambiguity of human morality — one she will only begin to understand when she carries her quest for the truth, and the killer, into adulthood twenty years later.”

Winter Garden, Kristin Hannah — Most people know Hannah from The Nightingale. But this is an earlier story about one woman’s heartbreaking story of love, loss and redemption set in World War II Russia. It’s also an intimate portrait of contemporary mothers and daughters.

Station Eleven, Emily St. John Mandel, I’m not usually a fan of science fiction or dystopian stories. But this one sounds intriguing and has good reviews. Twenty years after a deadline flu pandemic swept a city, Kirsten moves between the settlements of the altered world with a small troupe of actors and musicians called The Traveling Symphony, which dedicated itself to keeping the remnants of art and humanity alive. But they soon encounter a violent prophet who threatens the tiny band’s existence. The story moves back and forth in time, depicting life before and after the pandemic, and a strange twist that connects all the characters and story.

The Leavers, Lisa Ko — From Amazon: “One morning, Deming Guo’s mother, Polly, an undocumented Chinese immigrant, goes to her job at a nail salon—and never comes home. … With his mother gone, eleven-year-old Deming is left mystified and bereft. Eventually adopted by a pair of well-meaning white professors, Deming is moved from the Bronx to a small town upstate and renamed Daniel Wilkinson. But far from all he’s ever known, Daniel struggles to reconcile his adoptive parents’ desire that he assimilate with his memories of his mother and the community he left behind.”

Thanks for reading this long list of book recommendations! Happy Reading!

Have you read any of these books? Are they good or bad? What are you reading this summer?