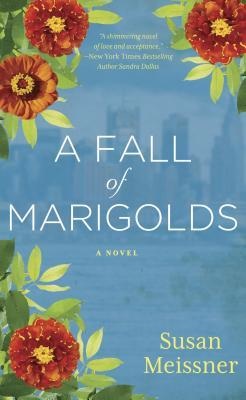 Congratulations to Jessica McCann for winning a copy of “A Fall of Marigolds!”

All of you book-lovers will be happy — I have another book review and giveaway today! And there’s one next week too! I just love book-realease season!  I am pleased to welcome Susan Meissner with her new novel,  A Fall of Marigolds.

A Fall of Marigolds is about two women who live a century apart, both of whom suffered great loss. What ties them together is a beautifully woven scarf with marigolds on it. Like the scarf, I thought of this book as a beautifully woven tale. But I’ll let Susan tell you more about it.

What is A Fall of Marigolds about?
The book is about two women who never meet as they are separated by a century. One woman, Taryn, is a 9/11 widow and single mother who is about to mark the tenth anniversary of her husband’s passing. The other is a nurse, Clara, who witnessed the tragic death of the man she loved in the Triangle Shirtwaist Fire in Manhattan in 1911.In her sorrow, Clara imposes on herself an exile of sorts; she takes a post at the hospital on Ellis Island so that she can hover in an in-between place while she wrestles with her grief. She meets an immigrant who wears the scarf of the wife he lost crossing the Atlantic, a scarf patterned in marigolds.

The scarf becomes emblematic of the beauty and risk inherent in loving people, and it eventually finds it way to Taryn one hundred years later on the morning a plane crashes into the North Tower of the World Trade Center. The story is about the resiliency of love, and the notion that the weight of the world is made more bearable because of it, even though it exposes us to the risk of loss.

Tell us where the idea for A Fall of Marigolds came from.
I’ve long been a history junkie, especially with regard to historical events that involve ordinary people facing extraordinary circumstances. A couple years ago I viewed a documentary by author and filmmaker Lorie Conway called Forgotten Ellis Island; a hauntingly poignant exposé on the section of Ellis Island no one really has heard much about; its hospital. The two man-made islands that make up the hospital buildings haven’t been used in decades and are falling into ruins, a sad predicament the documentary aptly addresses.The documentary’s images of the rooms where the sick of a hundred nations waited to be made well stayed with me.

I knew there were a thousand stories pressed into those walls of immigrants who were just a stone’s throw from a new life in America. They were so close they could almost taste it. But unless they could be cured of whatever disease they’d arrived with, they would never set foot on her shores. Ellis Island hospital was the ultimate in-between place – it lay between what was and what could be. A great place to set a story.

Why a scarf of marigolds? What is their significance?
Marigolds aren’t like most other flowers. They aren’t beautiful and fragrant. You don’t see them in bridal bouquets or prom corsages or funeral sprays. They don’t come in gentle colors like pink and lavender and baby blue. Marigolds are hearty, pungent and brassy. They are able to bloom in the autumn months, well past the point when many other flowers can’t. In that respect, I see marigolds as being symbolic of the strength of the human spirit to risk loving again after loss. Because, face it. We live in a messy world. Yet it’s the only one we’ve got. We either love here or we don’t. The title of the book has a sort of double-meaning. Both the historical and contemporary story take place primarily in the autumn.

Secondarily, when Clara sees the scarf for the first time, dangling from an immigrant’s shoulders as he enters the hospital building, she sees the floral pattern in the threads, notes how similar they are to the flames she saw in the fire that changed everything for her, and she describes the cascading blooms woven into the scarf as “a fall of marigolds.”

What led you to dovetail the Triangle Shirtwaist Fire of 1911 with 9/11?
When I first began pulling at story threads, my first instinct was to tell a story about an immigrant struggling to remain hopeful as an unwilling patient at Ellis Island hospital. But the more I toyed with whose story this was, the more I saw instead a young nurse, posting herself to a place where every disease known and unknown showed up. It was a place like no other; a waiting place – a place where the dozens of languages spoken added to the unnatural homelessness of it. Why was she here? Why did she choose this post? Why did she refuse to get on the ferry on Saturday nights to reconnect with the real world? What kind of person would send herself to Ellis not just to work, but to live? Someone who needed a place to hover suspended. I knew something catastrophic had to happen to her to make her run to Ellis for cover.

As I began researching possible scenarios, I came across the Triangle Shirtwaist Fire, which up until 9/11 was arguably the worst urban disaster to befall Manhattan. There were similarities between that fire and 9/11, including the tragic fact that many trapped workers jumped to their deaths rather than perish in the flames. For every person lost in disasters such as these, there is always his or her individual story, and the stories of those who loved them. I wanted to imagine two of those stories.

GIVEAWAY: I have one copy of A Fall of Marigolds to give to one lucky reader. To be entered to win, leave a comment telling me what was the best book you read in 2013. The giveaway closes Friday, February 14 at 5 pm Pacific time.

Disclosure: I received a complimentary copy of A Fall of Marigolds to review for this blog post.  All opinions are my own and I only endorse books that I am proud to recommend to others.