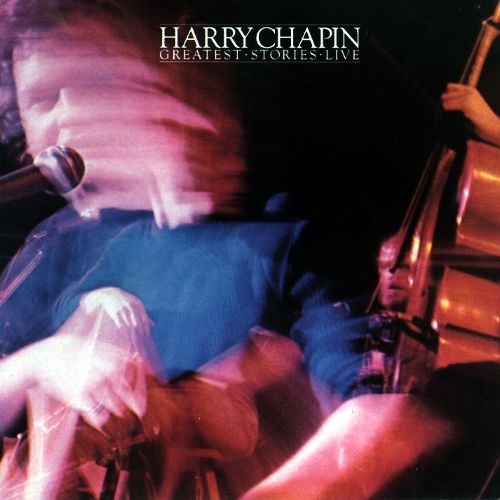 A Tribute to My Dad Through the Songs of Harry Chapin

I’d venture to guess that, unless you’re a fan of 1970s folk music, you’ve probably never heard much about or listened to Harry Chapin. This folk singer-songwriter was known for his long musical “stories.” He was not an artist that frequented the radio much because most of his songs were too long for the dial. But each song was a story, usually about a man and some sort of inner conflict.

My dad turned 73 last week. He is not moved by music the same way I am. He’s not the type to listen to songs in the car or put on an album at home. But even my dad will admit there are pieces of music and songs of which he can’t deny their power, Chapin’s stories being in that category. So while it may seem odd to write a tribute to my dad through music, the songs of Chapin are one of the best ways I can think to celebrate him. Mainly because he is the one who introduced me to Chapin’s songs and the memories of them belong with me riding in a car with my dad.

Nearly every summer of my later childhood, we took a family road trip from San Diego to Lake Tahoe. It was on these nearly 10-hour drives that I first heard Chapin’s music. About half way through the drive up California Highway 395 – close to the point where there is absolutely nothing to look at – dad would break out Chapin’s “Greatest Stories Live” cassette tape. It started with “Dreams Go By.” Then on to “W*O*L*D*,” “Taxi,” “Cat’s in the Cradle,” “A Better Place to Be,” and “Circle,” just to name a few.

I’m not sure why dad waited until the mid-point of the trip to listen to Chapin. Knowing my father and his strong sense of discipline, perhaps it was a “reward” for making it through half the route. Kind of like the way he’d allow himself one (and only one) Fig Newton cookie after dinner each night. Maybe he wanted to be sure he heard all the news and sports on the Mighty 690 before turning to music, something he saw as more entertainment than necessity. Either way, I knew at some point during that trip through California’s inland, Chapin and his Greatest Stories would make an appearance.

I once asked my dad why he liked Chapin’s music. He responded the tunes were not like typical songs. They were stories, he said. And as such, were more meaningful; full of lessons to be learned. This sentiment is very much my dad, as he always asked me – after every movie we watched together – what was the meaning of it; what did we learn and could apply to life. The lesson from him being that if something didn’t have greater meaning, there was no point in consuming it. For better or worse, this lesson has become a lens through which I view almost everything throughout my entire life.

It wasn’t until several years ago when I sought out Chapin’s music as an adult did I discover what may have been the true themes of many of those songs, and what probably really resonated with dad. There’s a deep contemplation of life choices, bordering on regret, that runs through so many of Chapin’s songs. It’s as if he doesn’t think there’s a right path in life; one can’t simply be happy with their choices. There’s always the road not taken.

This is not a theme you can understand when you’re a kid. When you’re young, you’re traveling down one road and you haven’t had your own opportunities to make conscious choices as to how your life will play out. But as an adult, your entire life is defined by your past decisions and the roads you took (and didn’t take). While I don’t think my dad views his life as full of regret, I’ve learned – being an adult myself – that as you get older, debating your life choices becomes inevitable (at least it has for me).

In “Dreams Go By,” Chapin sings about all the dreams he (or the protagonist) had as a young man. Yet as the years go by, and the dreams fade to make way for the more sensible things in life – a job, family, home. I find the music of this song fascinating. Listening to it, it sounds very upbeat. Yet the words and theme behind the music are quite sad.

And then there are the songs where the character does live his dream, but ends up unhappy in the long–run. In “W*O*L*D*,” he sings about the man who leaves his family to be a radio DJ. Yet the end of the song is filled with sorrow as he realizes he can no longer live this young man’s dream and wishes he could go back home to his estranged family.

This also comes up in “Mr. Tanner,” in which the dry-cleaner “from a town in the Midwest” takes a chance on his singing career and gets panned by critics and never sings again. This song breaks me upon every listen, as I always want to wrap my arms around Mr. Tanner and tell him not to give up what he loves the most. It’s deep stuff, and it’s deeper when I found the real-life Mr. Tanner in this article.

There’s also “Taxi,” which tells the story of the man who wanted to be a pilot, yet is now driving a taxi around San Francisco. And of course, Chapin’s most-recognized tune, “Cats in the Cradle,” the classic tale of the turbulent father-son relationship. Of course there are others, and these songs – as sorrowful as they are – are ripe with meaning. Is Chapin saying if you live your dream, you’ll end up with another form of regret? And if you don’t live the dream, you’ll regret that decision?

Yet not all of his songs are somber. My favorite song –“I Wanna Learn a Love Song” — is one of the more uplifting tunes and is the story of how Chapin met and fell in love with his wife, while giving her guitar lessons. And “She’s Only Seventeen” is about the hopes and dreams of a young women determined not to give up during the turbulent 1960s and ‘70s. “Let Time Go Lightly” is also an uplifting song.

Finally, there’s “Circle,” which was my dad’s favorite song. When “Circle” came on, dad lit up slightly and sang along. There may have been a few occasions where we played it a second time (very unlike my dad). In “Circle,” there’s hope:

All my life’s a circle;
Sunrise and sundown;
Moon rolls through the nighttime;
‘Til the daybreak comes around.

All my life’s a circle;
But I can’t tell you why;
Season’s spinning round again;
The years keep rollin’ by.

It seems like I’ve been here before;
I can’t remember when;
But I have this funny feeling;
That we’ll all be together again.

No straight lines make up my life;
And all my roads have bends;
There’s no clear-cut beginnings;
And so far no dead-ends.

I found you a thousand times;
I guess you done the same;
But then we lose each other;
It’s like a children’s game;

As I find you here again;
A thought runs through my mind;
Our love is like a circle;
Let’s go ’round one more time.

“Circle” is the tenth track on the album. Interestingly, the songs preceding “Circle” are on the somber side and those following are more uplifting. Is there a reason he sings it toward the end of his live performance? Perhaps it’s the same reason my dad waited until half-way through the road trip to play the album — you have to get through the tough parts of the journey in order to appreciate the happiness.

When I told my dad we were moving to Indiana, he responded by saying it’s good to make these changes while I was still young. I was 40-years-old at the time and felt far from young. I told him that perhaps I was too old to make such a drastic life change. He laughed it off, and said I had an entire lifetime ahead of me. As much as I hate to admit it, dad was right. Because little did I know then, that move was the end of one era, and the start of another.

In “Circle,” life is not a one-way, dead-end street full of regret. Life doesn’t end when you get older. There’s still potential in the years that “keep rollin’ by.” I think deep down, Chapin (and my dad) truly believed that. I’m thankful for my dad for introducing me to Chapin’s “Greatest Stories.” And I’m grateful for those songs, which will always be symbolic of my dad and the life lessons he taught me.