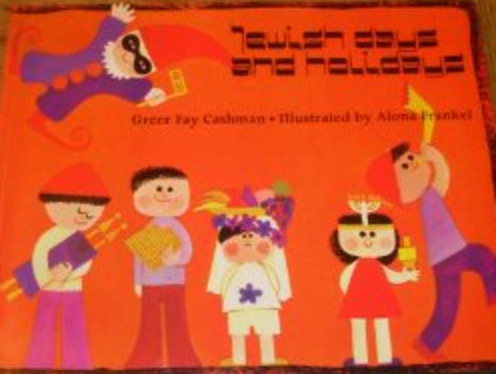 The Book That Started My Jewish Journey

Since we’re half-way through the 8-day celebration of Chanukah, let me tell you about my journey with Judaism. When I was 7-years-old, I attended my elementary school’s book fair where hundreds of children’s books adorned the tables waiting for purchase. As I looked around the room, I was drawn to one specific book – Jewish Days and Holidays. It was a bright orange book with colorful illustrations and included stories about all the Jewish celebrations. I knew instantly I wanted that book in order to learn about my Jewish culture. When my mother picked me up from school that day, I asked my mother to purchase that book for me. And thus began my first steps on my road to Judaism.

Let me give you some background to help explain why this was significant. I am Jewish and was born to both Jewish parents. My parents would call themselves culturally Jewish, not religious. After having religion “forced upon them” as children, my parents decided they didn’t want to participate in organized religion. We stayed home from school on the High Holidays, but never went to a synagogue to worship. We had latkes and lit Hanukkah candles. And we had a Passover dinner (but not a seder). And my sisters and I never went to religious school and became a Bat Mitzvah when we turned 13. Yet identifying as Jewish was important to my parents.

Through my early years, I remember feeling like I wanted something more in terms of religion and spirituality. I wanted to learn what being a Jew meant. I was somewhat envious of my church-going friends because they had a place to go on Sundays where they participated in their religion.

So when I saw Jewish Days and Holidays at the book fair, I knew that was the beginning for me. Purchasing that book (or telling my mom to buy it) was the first proactive thing I did to embark on my Jewish journey.

Since reading that book in the early 1980s, I’ve continued on my path to Judaism. Going to college was like an opening of the flood-gates. The first thing I did at the first-week’s orientation was stop by the Jewish Student Union/Hillel table and put myself on the mailing list. I was also quite fortunate to make a few Jewish friends on my dorm room floor. I began attending Jewish student events and Shabbat services. I signed up for a Modern Jewish History humanities course. And at the age of 18, I became a Bat Mitzvah and chanted Torah in front of my family and friends.

I continued to be quite involved in Judaism in college, serving in several leadership roles on campus. I went to High Holiday services every year, and even made my first trip to Israel on a student mission in December 1996. After college, I wrote for my community Jewish newspaper.

Bryan and I were married under a chuppah (Jewish wedding canopy) by a rabbi. Bryan even broke the glass at the end of the ceremony. After taking a year-long Pathways to Judaism course for interfaith couples, we joined a reform congregation in town and I quickly got involved there as well. And now – many years later – Sophie attends Jewish preschool.

Although I would have liked more of a spiritual and religious Jewish upbringing, I’m proud of the road I took to Judaism. Mainly because it was it was me – and me alone – who really set out on it. I made the choice to engage in religion. And from the moment I saw that book, I knew I wanted Judaism in my life and I would make it happen.

I still have Jewish Days and Holidays on my book shelf. It’s now out of print and a bit dated. I plan to share the book with Sophie and tell her the story. Of course, I hope she continues her Jewish path. But I want my story to be a symbol to her that she has the power to embark on her own spiritual journey. For now, I’ll pull the book out every so often, and I smile.