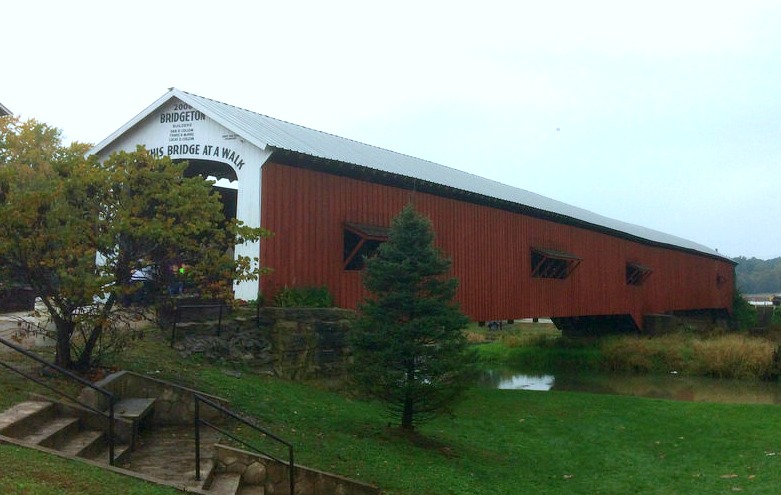 The Covered Bridge Capitol of the World

When we first moved to Terre Haute, there was one sentence that nearly EVERY person I met said to me. In fact, I had four different people utter this exact statement within a two hour period. That sentence was this:

You HAVE to go to the Covered Bridge Festival!

I soon came to find out that Parke County, which is located about 40 minutes outside Terre Haute, is known as the Covered Bridge Capitol of the World. It is home to 31 covered bridges, all having a unique background story. Everyone is so familiar with the book and movie “The Bridges of Madison County,” which took place in Iowa. Yet before I moved to Indiana, I had no idea about all the historical bridges right here.

The Covered Bridge Festival takes place every year, on the second Friday of October. When it started 60 years ago, it drew 250 attendees. Today, it’s the largest festival in Indiana, and welcomes more than 2 million visitors! It’s headquartered on the courthouse lawn in Rockville, a very small town of 2,600 people. Many other towns in Parke County participate in the bigger celebration, with the two largest ones taking place in nearby Mansfield and Bridgeton.

Sophie and I made our way to Bridgeton the first Sunday of the Covered Bridge Festival. This was the festival I was encouraged to attend since it’s known for its arts and craft vendors. And wow, it did not disappoint! We were told that to cover the entire festival on foot, it would be about five miles of walking. My feet can attest this is true. Sophie and I shopped and ate, and shopped and ate some more. The festival is known for its food vendors, and they were incredible.

We also visited the Bridgeton Covered Bridge and Bridgeton Grist Mill, the oldest continually operating mill in Indiana (probably the Midwest). It’s been open very day for more than 180 years. The next day, we opted to see the bridges and learn a bit about the history. We took a chartered bus tour from Rockville to see five covered bridges, and visited two towns. First up was West Union Bridge — the oldest bridge — built in 1876. It’s also the longest bridge at 300 feet and does not allow cars to drive through it. It was a beautiful, sunny day, which was especially nice since it rained the entire day before. Look at this amazing view from the bridge! From there we went on to Marshall Bridge and Rush Creek Bridge. You’ll notice most covered bridges say, “Cross this bridge at a walk.” This comes from horse-drawn wagons crossing the bridges (in Parke County, many Amish still use this form of transportation). Slow walking minimizes the stress and structural damage from the pounding of horses’ hooves.

Here’s a look at the roof of the bridge and inside. It’s interesting how each bridge has such a different feel to it. The Jackson Bridge was constructed during the beginning of the Civil War. The builder, Joseph J. Daniels, made a political statement in naming the bridge after Andrew Jackson in honor of Jackson’s statement to John Calhoun: “To the Union, it must be preserved.” When first built, the bridge portal was lettered: “The Federal Union: It must be preserved” (source). My covered bridge selfie in the Jackson Bridge. We stopped in Tangier, a township of Parke County, that’s famous for their buried beef. The meat is – literally – cooked underground. And it was delicious. We then visited a Quaker Church in Bloomingdale, famous for its apple butter. After the tour ended, Sophie and I stayed in Rockville a bit, visiting antique shops and checking out the vendors. We treated ourselves to ice cream, which was churned on site with this John Deere motor. My apple cider milkshake was delicious. We had such an amazing few days at the Covered Bridge Festival. I can definitely see why everyone recommended I go. And while the shopping and food in Bridgeton was awesome, I really loved the leisurely visits to the covered bridges and learning about Indiana history. Can’t wait until next year!