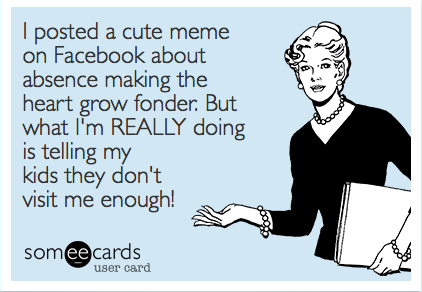 Facebook — People either love it or think it’s the spawn of the devil. I love using Facebook to stay connected with friends and family, or seeing what my people and their kiddos are doing. (The first and last day of school photos get me every year.) And as an introvert, I especially like that it fosters communication without me needing to talk on the phone.

But over the years of using the social media giant, I have come to realize that Facebook users come in many different types. And several of those folks have some habits that can drive a person a bit batty. Let’s take a look at the different faces of Facebook users. Do you recognize a few on the list?

Those who share memes and quotes as subtle messages – Let’s call this the passive-aggressive Facebook poster. You know the one — the person who posts those “deep thought” quotes that are actually directed at specific people. I’m all for a good quote now and then, but when they’re quite obviously directed at a person, go ahead and keep your opinion to yourself.

The “Vaguebooker” – Or more commonly known as the bater. The person who will hint at something, but will never come out and say what the situation really is. But it’s just enough to garner sympathy or for the “comment” section to fill up with messages of concern.

The “Happy to my Jewish, Christian, Gay, Mother, Whatever You Are Celebrating Today” – I understand the intent behind these posts are genuine and well-wishing messages. But it comes across as very “othering.” Can we agree that we are all humans and we all celebrate different things? And just say “Happy Hanukkah” instead of “Happy Hanukkah to all my Jewish friends.”

The medical “experts” that post links about the cure to cancer and autism from unscientific publications – Here’s the deal: If there really is a cure for cancer, or a development in the cause of autism, it will be on CNN or in the American Medical Association, New England Journal of Medicine, or Scientific America. Not some fringe website with articles full of misspellings that cite universities by incorrect names (most recently I saw University of California David). The Lurker – The lurker is the person who never or rarely posts anything, but you can bet they are looking at everything you’ve posted. My favorite is the lurker who then commits the social faux pas of saying to you in person, “I saw your kid doing that on Facebook.” If you’re going to lurk, do yourself a favor and play down your stalker tendencies.

[SIDE NOTE: It’s okay to lurk (we ALL do it). But for goodness sake, throw out a like, comment or status update every now and then so it’s not so creepy when you talk about in person what you read on Facebook.]

The person who only posts memes and photos with no personal information – This is similar to the lurker, but instead of not posting anything, they opt for posting funny photos, Mashable quizzes and memes. There’s not a personal photo or shred of originality anywhere on their profile.

Debbie Downer – I feel the life being sucked out of me every time I read a status update from these people. EVERY SINGLE status update a “woo is me” message. They are always being wronged and life is SO hard. Chain letters and the “I don’t think anyone is readying this but …” status update – This is the person who posts the chain messages and the “Sometimes when I’m alone, I put butter all over myself …” and then if you comment or like, you are tagged and have to do the same. To quote Seth and Amy, “Really!?!” Do you think I’m going to share that I lather myself in butter?!

The television show spoiler – There really should be some cardinal rule that you can’t talk about television show plot twists and turns the night the show airs, because us West Coasters always get screwed. Even the well-intentioned “Spoiler Alert” preface doesn’t do much when you go on to say, “I am devastated over tonight’s episode of Grey’s Anatomy.” Spoiler alert: We can tell from your update that it’s going to be bad.

People who hate on Facebook – Here’s the simple truth: If you hate it so much, don’t use it.

What type of Facebook user drives you crazy? Did I miss any types here?